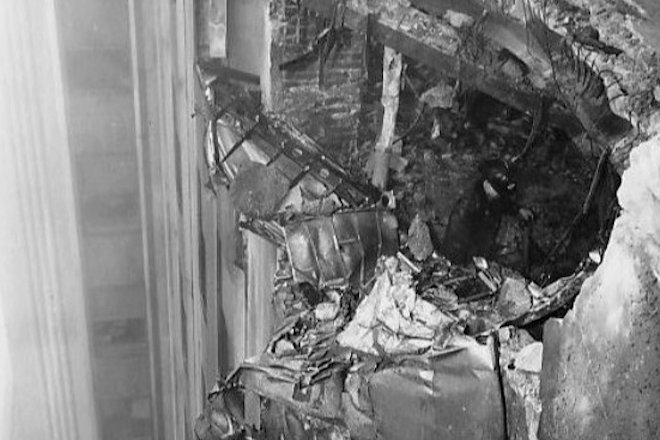 This photo shows the B-25 bomber that crashed into the Empire State Building at the 78th floor in 1945.

The cause was weather, specifically a heavy fog that enshrouded New York City and cast a cloak of invisibility over the tops of its skyscrapers.

“The plane exploded within the building. There were five or six seconds – I was tottering on my feet trying to keep my balance – and three-quarters of the office was instantaneously consumed in this sheet of flame." – Catherine O'Connor, survivor

On July 28, 1945, Lt. Col. William Franklin Smith Jr., a 27-year-old West Point graduate, U.S. Army pilot, and Distinguished Flying Cross recipient, was at the controls of the plane making the trip from Bedford, Mass., to Newark airport to pick up his commanding officer. They were headed to Sioux Falls Army Base in South Dakota for stateside assignment. Along for the flight to Newark was a crew member, Staff Sgt. Christopher Domitrovich, and Albert Perna, an aviation machinist's mate 2nd class in the Navy.

Smith's ride was a B-25 Mitchell, a twin-engine, medium bomber manufactured by North American Aviation. Named in honor of Major General William "Billy" Mitchell, a pioneer of U.S. military aviation, the aircraft was 53 feet long, weighed 10 tons and had a wingspan of 68 feet. Its top speed was 272 mph.

On his approach into the New York City area, Smith discussed the fog with air-traffic controllers at New York Municipal Airport–LaGuardia Field (now LaGuardia Airport), about 16 miles east of the Newark airport. He was encouraged to land, but requested military clearance to proceed, some accounts say. (Others say Smith requested to land at Laguardia and was told to carry on.) In any event, just about all accounts reported that one of the men in the control tower told Smith that from his vantage point he couldn't see the top of the Empire State Building.

Continuing west in the gray soup and not quite sure where he was, Smith apparently caught sight of the East River, but thought it was the Hudson River, on the west side of the city. He flew down, seeking a view of the ground, even dropping his landing gear for what he thought was his imminent landing at Newark.

But at 500 feet, Smith popped below the fog only to realize he was flying among the skyscrapers of midtown Manhattan.

Suddenly, the New York Central Building (now the Helmsley Building) came into view. He took evasive action, swerving to avoid the skyscraper – and then zoomed past the Chrysler Building. But flying low and slow, the world's tallest building loomed straight ahead. He pulled up suddenly and turned, but with lackluster lift and nowhere to go, the bomber veered into the northern face of the Empire State Building, exploding on impact and tearing an 18-foot-by-20-foot hole in the structure near the 79th floor.

Flames filled the interior of the building to several floors below, and blew out the exterior hole. One engine sailed straight through the building and out the other side, landing on a penthouse apartment on 33rd Street and igniting a fire.

Twenty-year-old Betty Lou Oliver, an elevator operator, suffered severe burns after she was blown from her position on the 80th floor. She received first aid from emergency personnel and was placed in an elevator for the ride to the bottom, where an ambulance awaited.

But the rescuers failed to notice that the safety cables on the elevator car had been damaged in the blast. The cables snapped on Oliver's descent, and the elevator went into free fall. It hit bottom in seconds.

Incredibly, Oliver survived the 75-story plunge. Experts believed the massive amount of elevator cable that preceded her 1,000-foot-plus fall and piled into a spiral at the bottom of the shaft probably cushioned the fall. She had to be extricated from the wreckage.

The incident still stands as the Guinness World Record for the longest survived elevator fall.

Another lucky soul, Catherine O'Connor, who worked for War Relief Services of the National Catholic Welfare Conference on the 79th floor, also survived. She recounted later:

“The plane exploded within the building. There were five or six seconds – I was tottering on my feet trying to keep my balance – and three-quarters of the office was instantaneously consumed in this sheet of flame. One man was standing inside the flame. I could see him. It was a co-worker, Joe Fountain. His whole body was on fire. I kept calling to him, ‘Come on, Joe; come on, Joe.'” He walked out of it."

But others were not so lucky as Oliver and O'Connor. The crash killed 14 people: Smith and his two passengers, and 11 War Relief Services workers. (Joe Fountain, who walked out of the fire that day, died later of his injuries.) Twenty-six people were injured.

The accident resulted in about $1 million dollars of damage (more than $10 million today) to the 102-story-tower, the world's tallest building since its completion in 1931. (It was surpassed in 1970, when the North Tower of the World Trade Center was topped off.) The structural integrity of the building was not compromised.

When the bomber slammed into the building, an engineer for the American Society of Civil Engineers happened to be dictating a letter onto a recording device. He captured the sounds of the crash on tape.