Adopted and abused by Jerry Sandusky, son's at peace in not-so-Happy Valley 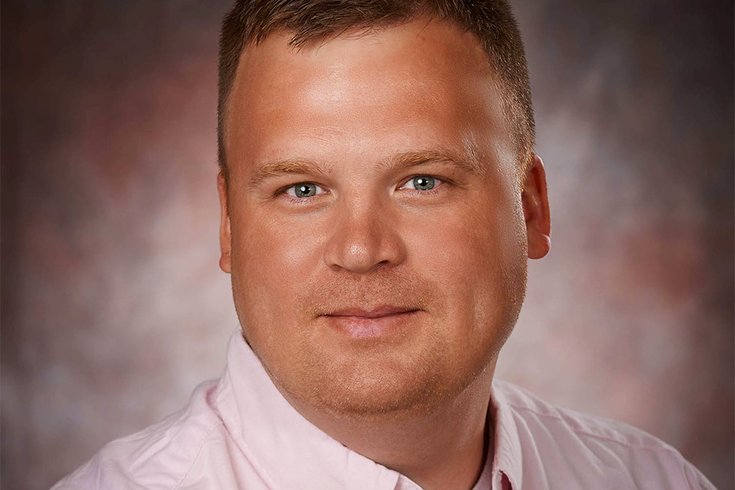 “I intend to tell my story until I can’t breathe,” says Matt Sandusky of the sexual abuse he suffered at the hands of his adoptive father, Jerry Sandusky. He is speaking at a conference on victimization of children on Friday at Stockton University in Atlantic County.

At peace, even though his adoptive father, Jerry Sandusky, 73, is still appealing his convictions in 2012 – 45 counts in all – on charges of molesting 10 boys that put him in prison for 30 to 60 years.

At peace, despite the wider tarnish to his own alma mater, Penn State University, which was fined $60 million, barred from postseason football for four years, forced to pay out nearly $60 million in legal settlements to victims of the former assistant coach (including an undisclosed amount to Matt) and the diminished legacy of the late Joe Paterno, the Nittany Lions' once-revered coach.

At peace, as the trial of three former university officials accused of child endangerment is set to begin later this month, five years after charges were first brought against them in the worst scandal ever in college football.

At peace, even though his estranged brother, Jeffrey, another adoptee, was just recently charged with soliciting teen-aged girls for sex via text messages.

Maintaining his own serenity – he runs a foundation called Peaceful Hearts – and helping others find their own personal peace is why Matt Sandusky, 38, is speaking out years after his adopted father's convictions.

On Friday, Sandusky will serve as the keynote speaker at a Conference on Victimization of Children at Stockton University in Atlantic County. Thursday, he’ll engage students and the public, also at Stockton, in the Campus Center at 5:30 p.m.

“I am grateful that Matthew Sandusky is coming to Stockton University to address his experiences. I am hoping his talk will expand the awareness of child sexual abuse in our society, and underscore how we can help survivors,” says Cheryl R. Kaus, the dean of the college’s School of Social and Behavioral Sciences, who arranged his visit.

“Nothing should be more important than protecting children,” explains Sandusky, who says his adoptive father repeatedly abused him from the time he was just eight until he was 17.

The abuse, he says, happened at the Sandusky home, on the Penn State campus, traveling on behalf of the school and most notably at the nonprofit Jerry Sandusky had founded, Second Mile.

Matt Sandusky says his adoptive father, who spent 32 years on the Penn State sidelines, used the charity group as a tool to identify and target hard-luck boys, grooming vulnerable children – boys like Mattie Heichel. That's the name Matt Sandusky grew up with in a troubled household in central Pennsylvania.

While a whole cottage industry of deniers – ranging from his estranged adoptive mother, Dottie Sandusky, to conspiracy-theorist bloggers and podcasters – would be happy to have Matt Sandusky shut up about one of the most notorious child abuse cases ever, that’s not happening.

“I intend to tell my story until I can’t breathe,” he says softly and evenly near the end of 50-minute-long phone interview.

He explains he’s motivated to help victims, especially boys, who tend to be more stigmatized by abuse “find the courage to speak the truth.”

Richard Gelles, the former dean at the University of Pennsylvania’s School of Social Policy and Practice, says male victims of sexual abuse tend to come forward later in life than their female counterparts. That’s especially true if a man did the abusing because it opens questions about identity and sexual orientation, Gelles added. Statistics put the typical lag time at 20 years.

And then there is what Gelles calls “a culture of denial that exists in Happy Valley,” the nickname for State College, the university’s hometown. “There were red flags, but they didn’t want to hear it,” he says.

Red flags were everywhere from the start of Mattie Heichel’s life.

His family was poor, his dad an abusive alcoholic who beat his family. His mom was just 18 when he was born.

His parents divorced when he was six. He saw his dad just twice afterwards. The family moved in with grandparents. His grandfather was “abusive and mean,” whacking him with a broom stick and commanding him to endure the beating without complaint. His mom passed bad checks, got jailed.

“She tried, but she was not a great role model. She tried her best with what she had. That was normal,” Sandusky recalls of his troubled early years.

All of which left him vulnerable.

A child in such an environment “doesn’t know what normal attachment is, no one is there to soothe them,” says Penn's Gelles, noting the result is abnormal brain development. “If they are not grounded in a dependable relationship, they grow like a feral child.”

A skilled sexual abuser such as Sandusky can "identify and groom" such a child, says Gelles, adding that abusers have a "sense” for picking out a vulnerable child. 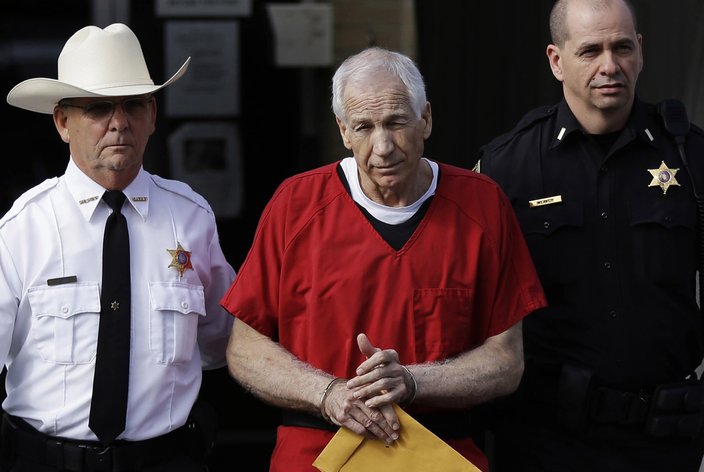 In his second year at Second Mile, when Matt was eight, Sandusky began to focus his attention on Matt: inviting him to football games, driving alone with his hand on the boy’s knee, and then more. And more.

Targeting him was easy. Matt’s entire troubled young life was there in a manila folder at the Second Mile office, ready to be spoon-fed to the abuser who became his adoptive father.

Matt acted out, stole, set a barn afire, ended up in the juvenile criminal justice system. He’d tried to break away, only to become first a foster child in his mid-teens and then legally adopted by the Sanduskys at the age of 18, staying tethered to their home because he was on probation until he turned 21.

One of his adopted siblings confided he, too had been molested, claims Matt. But he has kept his brother’s name – there were five adopted boys and one adopted girl – confidential, despite that brother having subsequently denounced Matt as a liar.

It wasn’t until the midst of Jerry Sandusky’s 2012 trial that Matt broke his silence.

Matt Sandusky was 33 years old then – 25 years after the abuse began.

He’d stood with the Sandusky family at first in defense of Jerry Sandusky.

But on the first day of testimony, a man identified only as Victim 4 – someone Matt Sandusky knew personally – testified for hours about the abuse he’d endured from the football coach.

He also opened up to a therapist three times a week and continues therapy four years later, though less frequently.

Matt Sandusky was prepared to testify as a rebuttal witness against Jerry Sandusky, but that wasn’t necessary: the defendant decided not to testify. Some believe Jerry Sandusky passed on the witness stand because of Matt’s own willingness to testify.

Ever since, Matt Sandusky has been willing to take a stand in public. In addition to creating a foundation to assist abuse victims, he’s written a memoir, “Undaunted,” and been a central voice in a documentary, “Happy Valley.”

But Happy Valley isn’t behind Matt Sandusky; it still envelops him. 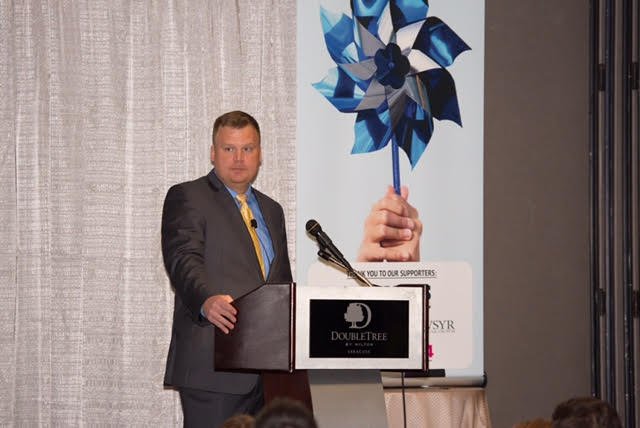 Matt Sandusky, abused as a boy by his adoptive father, Jerry Sandusky, is speaking Friday at Stockton University in South Jersey.

He’s an alumnus of the university, the dominant employer in the region. Dottie Sandusky lives “just on the other side of town.”

He’s legally changed his last name, though the court file with his new name is secret, to insulate his family a bit. But the name he shares with his abuser remains his surname professionally.

Many of the people in his old life “went away” when he came forward. But he says that's “a blessing. We can pick and choose our community.”

He says he’s surrounded himself now with good people.

“I don’t buy into ‘Happy Valley.’ Happy Valley is an institution. People tie themselves to an institution. That’s where denial comes from. It’s easier to root for your team that way. You can be a proud alumna, but you can still stand up for what is right.

“Every football season there are hundreds of thousands of people who come to Happy Valley, but the university is unwilling to work together with us" to communicate with those fans.

“Nothing should be more important than protecting children,” he says again.

“That’s why I’m using my opportunity to talk,” says Matt Sandusky. "People who want to know more should come and hear me at Stockton."