After 24 years of classes, WWII vet to receive degree at Villanova 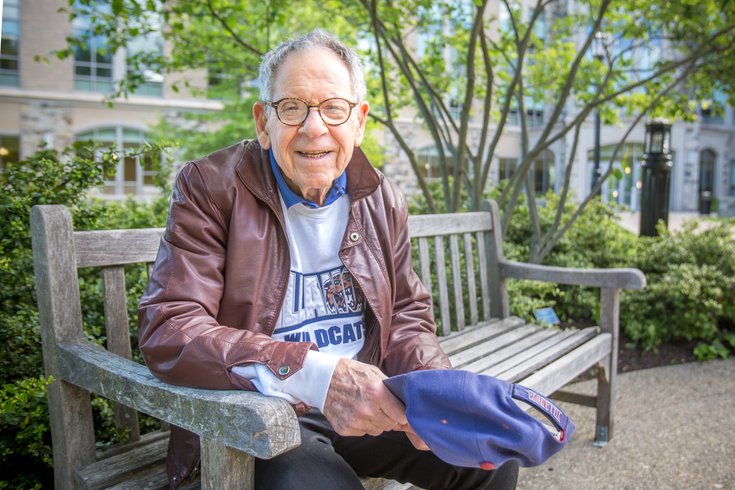 Irwin Medway has been taking classes at Villanova University for 24 years. On Friday he will receive an honorary 'Doctor of Humanities' degree. Here, Medway sits on a bench in front of Villanova's Driscoll Hall where he has recently taken classes.

Irwin Medway has been taking classes at Villanova University longer than most of his classmates have been alive.

Medway, 93, has taken at least one class each semester since enrolling at Villanova 24 years ago. On Friday, the World War II veteran and Purple Heart recipient will receive his first college degree.

"Sometimes, when the family would get together I would tell them a story about this class," said Medway, who has three children with his wife of 72 years, Corrine. "They would say, 'Isn't it time that you get a degree?' I would say, 'I didn't earn it, no.'"

Medway, of Lansdale, Montgomery County, has been taking classes at Villanova since 1993 as part of its Senior Citizen Personal Enrichment Program, which allows seniors to take courses for personal enrichment, rather than receive credit.

In honor of its 175th anniversary, Villanova will present Medway with an honorary degree of Doctor of Humanities. But his education – decades in the making – will hardly be finished.

"Irwin has what I hope I have when I'm (93) — an insatiable curiosity about the world," said Timothy J. Horner, a humanities professor. "It was a wonderful thing for my students to see that there is a person here who isn't in it for the degree – that he was there out of the pure joy of learning. It just felt good to him to be curious and to try to explore the world."

Over the years, Medway has taken myriad classes, mostly relating to history, theater and communications. He has had 43 professors, some of them more than once.

Like many collegians, he selects his courses based on his interests, the professor and the start time.

But his reason for avoiding early morning classes has nothing to do with sleep. He takes his wife to work at Har Zion Temple in Penn Valley, where he also volunteers.

"I'm looking for something of interest to me and my life," Medway said. "That would be the primary thing – that perhaps I could contribute."

Sometimes, the course description doesn't adequately convey the lessons that will be taught. Medway once signed up for a course called "Theatrical Experience" taught by the Rev. Peter Donohue, now the university's president. It turned out to be a class that involved a bit of dancing.

During line dances, Medway said he would try to hide behind the many football players in the class. But Donohue proved too smart for his ploy.

"He would say, 'Irwin, this is a room where they teach dance — it's mirrored,'" Medway said, laughing at the memory. "'All I have to do is turn any way and I'll find you.' We kind of joke about that."

"That enthusiasm for learning something new would be impressive at any age, but it's especially impressive at Irv's age." — John O'Leary, Villanova professor

Though Medway is at Villanova to learn, he carries a wealth of knowledge and experiences that he eagerly imparts to his classmates and professors. On several occasions, his professors have asked him to address the class.

Marc Gallichio, a history professor, asked Medway to detail his experiences as an infantryman in World War II.

In addition to the Purple Heart, Medway earned a Bronze Star Medal for heroism for leading a group of servicemen to safety after his lieutenant was killed beside him – all after losing his own helmet and rifle. He also was wounded in Holland, but later returned to combat.

"Among the students taking the class are guys from the football team," Gallichio said. "It's got all these linemen in the room. ... I've got to tell you, the students were just spellbound to hear him talk about this — to see this guy, who couldn't have been half of their size, talking about his experience."

A LIFETIME OF LESSONS

Medway could not afford to enter college after high school. He instead went into the shipbuilding industry, knowing he would be drafted. His boss offered to get him a deferment, but Medway declined.

"I said, 'I cannot do that," Medway said. "I can't walk down the streets and have the women and mothers of my friends say, 'Why is he home?'" 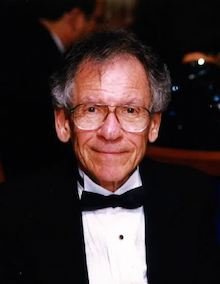 Irwin Medway's professors describe him as an affable student with great enthusiasm for learning. He likes to sit in the front row of class.

So, Medway went off to base training.

The Army then enrolled him in its Specialized Training Program, a World War II initiative designed to meet the demand for junior officers and soldiers with technical skills. As part of that program, Medway took classes at St. Bonaventure University and Rutgers University before being sent into combat in Europe.

When his service ended, Medway opted to enter the workforce. He later took some classes at Syracuse University, but was unable to finish his degree.

"If I have one regret, it's that I never took advantage of the G.I. Bill of Rights when I got out of the military," Medway said. "I could have been as smart as my friends who became doctors and lawyers."

Still, Medway built a career as a salesman for Columbia Records, then under the CBS umbrella. His coverage area shifted from upstate New York to New York City to Hartford, Connecticut. In 1973, he was reassigned to Philadelphia, where he helped promote a burgeoning Billy Joel.

Medway opted for early retirement in 1983. Ten years later, he began taking classes at Villanova. And he never stopped.

"The fact that you get older, you become bolder. I do things that might embarrass some young persons. Because I like people." — Irwin Medway, World War II veteran

"People ask me – they try to be very polite and indirect – 'What do you do to remain active?'" Medway said. "The only answer I can come up with is (that) reaching old age means that you've learned and you've lived history. When people refer to a name in the past and the students who are 18 or 22 don't remember, I will remember."

Once, Medway said, a professor teaching on Napoleon Bonaparte and the French Revolution instructed his class to treat him as Napoleon when he re-entered the classroom.

"I'm the only one who stood up," Medway said. "He said, 'Does anybody know that I'm the Emperor? Irwin stood up – he knows.' It was a compliment."

Medway's professors describe him as an affable student who has a great enthusiasm for learning. He sits in the front row, with his notebooks at the ready.

Medway often defers to his younger classmates, recognizing that his classes are geared toward them. But, when asked, he will happily share his thoughts and experiences.

"He's not just interesting – he's interested," said John O'Leary, a communications professor. "He likes to take down notes on what the lecture might be that day. He's always got a smile on his face. Often times, he's coming in with chocolate for the students.

Class has changed quite a bit since Medway first attended college during his military days. For one, he doesn't have to march to class. But he said he sometimes walks into a new class to find students sitting silently, waiting for the professor to begin.

In his younger days, Medway said his peers would be socializing and setting plans for the weekend. So, Medway sometimes attempts to liven up silent classrooms.

Once, Medway decided to greet every student that walked through the doorway, encouraging other students to do likewise. Within a week, Medway said, everyone in the classroom was talking to one another.

Another time, Medway addressed a quiet classroom by urging the students to get to know one another.

"I stand up and I say to the class, 'This room was not made for silence,'" Medway said. "Can you imagine? The students look up at this older man and say, 'What the hell is going on?'"

Medway ended that message by inviting them all to lunch. For the rest of the semester, Medway said he had a different student join him for lunch each Wednesday.

"The fact that you get older, you become bolder," Medway said. "I do things that might embarrass some young persons. Because I like people."

Yet, Medway said he is nervous to receive his honorary degree.

He is one of four people slated to receive an honorary degree at Villanova's commencement ceremony. Among the others is former New York City Mayor Michael Bloomberg, who also will serve as the commencement speaker.

Another 2,000 graduates also will file into Villanova Stadium to celebrate their accomplishments.

"When I see the other honorees on [Friday]," Medway said, "I'll think how much they deserve it and I do not."