Ahead of finale, Phillies hosting 'Game of Thrones' night 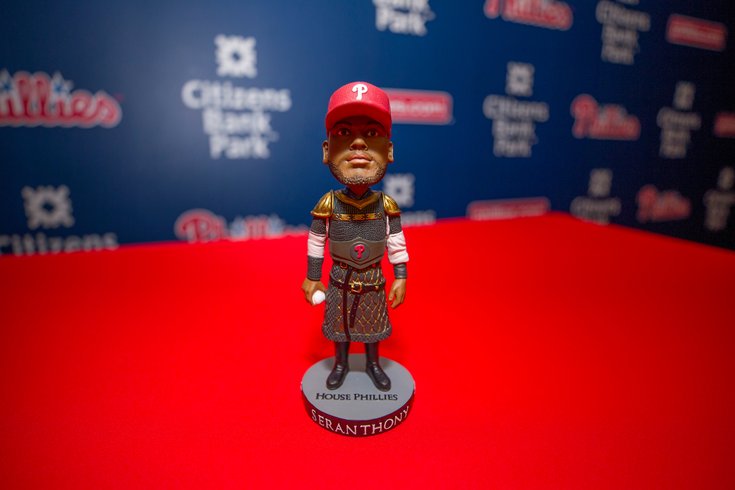 The Phillies' Seranthony Dominguez bobblehead, for Game of Thrones Night on May 13.

On Monday night, six days before the series finale of "Game of Thrones," the Phillies will host its third night devoted to the show at Citizen's Bank Park.

The event will feature the show's iconic Iron Throne, as well as bobblehead giveaway to the first 3,000 fans of the Phillies player with the most Game of Thrones-like name, Seranthony Dominguez. There will also be special scoreboard highlights, music and other surprises.

According to Colleen Noce, the Phillies' coordinator of group sales, the "Game of Thrones" nights are produced in direct conjunction with HBO, as part of a wider partnership between that network and Major League Baseball.

"It's an exciting promotion that we've been able to use for the last couple years and especially with it being the last season this year it's just been a really nice touch to be able to have this night at the ballpark," Noce said in an interview with PhillyVoice. She added that the team had to do the promotion in April or May, and were happy to get the Game of Thrones Night spot the week before the finale.

"This partnership is a natural fit for the Phillies as we begin our quest to sit atop the leaders of baseball," John Brazer, the Phillies' director of fun and games, told PhillyVoice.

The Phillies held a "Game of Thrones" night in 2018, despite HBO not airing a season of the show that year. In 2017, to promote that year's event, the Phillie Phanatic was "knighted," by then-Phillies outfielder Aaron Altherr, as a "knight of the Outfielders' Watch," in which the mascot was sworn to "protect the Wall." And while he may not have suffered as bloody a fate as many characters on the show, Altherr was designated for assignment by the Phillies last week.

While the last Game of Thrones Night featured a bobblehead giveaway of the Phanatic sitting on the Iron Throne, the addition of a Phillies player with "Ser" right in his first name proved irresistible to the team for this year's version of the bobblehead, which features Dominguez, a relief pitcher, sporting the sort of armor that knights wear on the show.

"Our merchandise people are very creative," Noce said of the serendipity of Seranthony's name. "I think they had had this on the brain for a little while, so it just worked out this year that we could use it." The bobblehead, the team said, is already sold out.

For a few years this decade, the Phillies struggled on the field, which made special promotions an important vehicle to get fans into the stadium. Now that the team is on the upswing, with both star players and a winning record drawing larger crowds, has the team's approach to promotions changed?

"I think it does change a little bit of what we decide to host," Noce said. "There are certain events that we do hold year in and year out no matter what, it's a segment of our fan base - that we've always had these nights to get that fan base out to the ballpark." She added that the team adjusts both which events they hold and when they hold them, but the Phillies aren't planning to stop doing them.

In 2015, Hafthor Julius Bjornsson, the massive Icelandic actor who plays Gregor "The Mountain" Clegane on the show, took batting practice at the ballpark, to promote his appearance at an area Renaissance Faire. The 6'9", 400-pound actor, who has competed professionally in basketball, powerlifting and strongman competitions, proved somewhat less adept at baseball, although he was the rare visitor to the ballpark who's physically larger than the Phanatic:

#TheMountain picks up the #Phanatic and then does some casual stretching with the team. pic.twitter.com/h06WUHCMBW

While Game of Thrones will end for good next Sunday, fans of the team and show alike will have the entire summer to chew on what happens. Then, fans can turn their attention to the questions of whether the Phillies can fulfill their long-term, Daenerys Targaryen-like goal of taking back the crown, and whether or not Bryce Harper is, in fact, The Prince That Was Promised.