At Tuesday's preliminary hearing for Michael White, a divisive case got even more heated 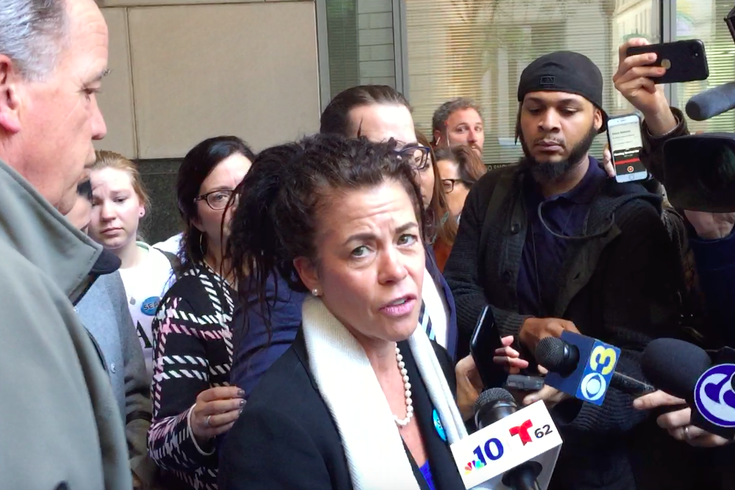 Sean Schellenger's mother Linda speaks to reporters after the man who allegedly stabbed her 37-year-old son to death in July was held over for trial on charges including third-degree murder, possession of an instrument of crime and voluntary manslaughter.

Michael White fatally stabbed Sean Schellenger during a confrontation not too far from Rittenhouse Square on July 12.

That much we know for certain, and it’s a horrible reality that brought droves of people to Philadelphia’s Criminal Justice Center for White’s preliminary hearing on Tuesday morning.

So many people wanted to support the victim’s family, or White and his family, that as many people were standing in the aisles and along the walls as those sitting in the available chairs – in what one employee termed an “obnoxiously hot” Courtroom 306.

Instead of providing clarity – or prompting Municipal Court Judge Charles Hayden to downgrade the third-degree murder charge filed against White, as his attorneys asked – the hearing raised even more questions about what had led up to a tragedy.

It also positioned the case as one that could divide Philadelphians along racial and class lines, with each side seeing what it’s inherently predisposed to see.

Nobody will ever know that.

But the attorneys and a pair of witnesses – not to mention reaction from both sides outside the courthouse after the 80-minute hearing – offered some limited insights.

WHAT LED UP TO SEAN'S DEATH?

The hearing started with the announcement of the results of an autopsy report that found a single six-inch-deep stab wound to the back had caused Schellenger's death.

That examination also found the victim had a .199 blood alcohol content level and traces of cocaine found in his system.

After those details were entered into the record, Erik Peterson took the stand. An eyewitness to parts of the altercation, he called 911 when he said he saw White produce a knife with a six-inch steel blade.

On the night of the killing, the soft-spoken Peterson was working as a server at Spice Finch, a modern-Mediterranean restaurant holding its grand opening at South 17th and Chancellor streets.

The kitchen had closed around 10 p.m., but people were still there celebrating the opening afterwards when he saw a beige and black car come to a stop outside, with a man getting out of each vehicle to engage in a conversation. There was no conflict or heated nature to their chat, he testified.

“The defendant didn’t know what to do. He just stood there and looked at me for a few seconds." – William Norris Jordan, eyewitness

At that point, Peterson said he saw a “young man on a red bicycle … insert himself into their conversation.” With his pointer finger, he then pointed to indicate to the court that the young man was White, who had been making food deliveries on his bicycle that night.

Peterson was watching through closed windows, so he said he couldn’t hear anything that transpired but, soon, White and Schellenger – who’d gotten out of the black car – made their way off 17th Street and “into the alley,” meaning the narrow Chancellor Street.

White “drew a knife with his right hand and his left hand was up as if motioning to (Schellenger) to stop,” said Peterson, noting that he then saw Schellenger “charge at the defendant.”

“I could see they were exchanging words but couldn’t hear them. … When I saw a knife was raised, that’s when I turned to the host stand to call 911,” he said, explaining how he didn’t see White actually stab Schellenger. “I saw the fall (from Schellenger tackling White) and the rising of the knife, but that’s when I turned away.” 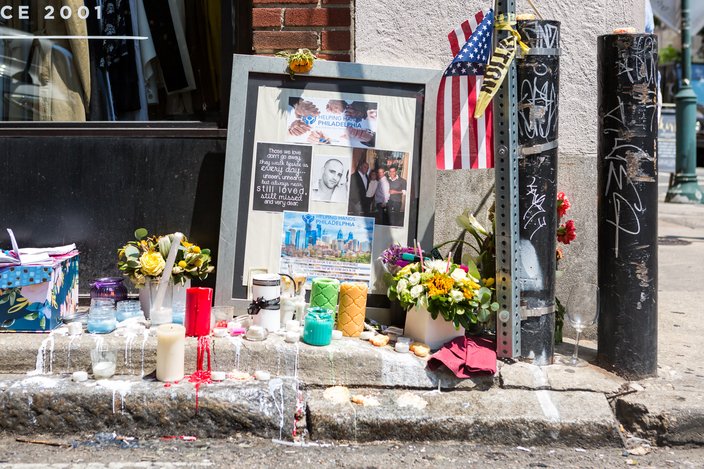 The second, and final, witness was William Norris Jordan, who was driving from the restaurant he owns at 20th and Lombard – Lou Bird’s – to the Happy Rooster that evening. He stopped off at Rouge where he was surprised to see an old friend, Schellenger.

They wouldn’t stay at Rouge all that long, though. After drinking half of a drink that he’d been given, Jordan left with Schellenger and another friend, Uri Jacobson, to drive to the Happy Rooster. Despite the autopsy findings, Jordan testified that Schellenger did not appear to be intoxicated.

The trio traveled fewer than two blocks when traffic backed up near 17th and Chancellor. Schellenger got out of Jordan’s car. Soon, Jordan would hear “loud voices.”

“Do you want this? You don’t want this,” he said he heard in a voice that wasn’t Schellenger's.

Jordan testified that he saw White “grab for his backpack and try to open it. He was frustrated that it wouldn’t open at first but he pulled it a few times and it opened.” On the stand, he teared up when recalling how he then saw the knife. 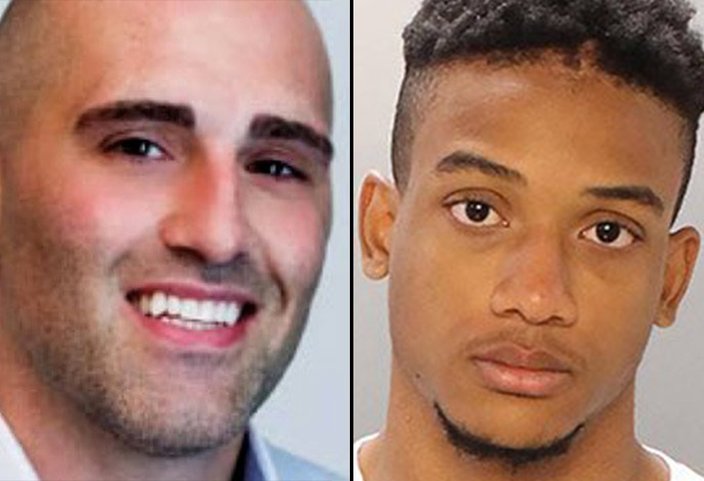 Sean Schellenger, 37, of Point Breeze, left, was stabbed to death July 12 in the Rittenhouse neighborhood of Center City, according to police. Michael White, right, is charged in the case.

Schellenger then picked up White in what “looked like a wrestling move,” with the defendant's feet no longer touching the ground, Jordan said.

At that moment, a “very strong aggressive movement came down over Sean’s back and they both dropped to the ground,” he said of the moment his friend suffered a stab wound.

“The defendant didn’t know what to do. He just stood there and looked at me for a few seconds” before running off, Jordan said. “I think he looked shocked.”

He would lose his composure when asked to look at a still photograph of the moment White stabbed Schellenger, an image taken from a “short cellphone video” that was not shown during the preliminary hearing.

On cross examination, White’s attorney Daniel Stevenson asked the witness if he heard Schellenger say “I’m going to beat the black off of you,” as his client claimed.

Jordan said he didn’t hear it, and Voci objected to the question being asked in the first place. Though the prosecutor termed it "a complete fabrication," a family spokesman said White maintains to this day that that's exactly what Schellenger said to him that night.

For his part, Stevenson unsuccessfully sought to get the third-degree murder charge dropped to voluntary manslaughter, arguing that if you strip away the “confluence of race and class and homicide,” the case is rather straightforward.

“There was not an aggressive move on Michael White’s part,” he said, setting the stage for a potential self-defense argument at trial. “(Schellenger) ignored (White’s warning to stay back) and charged him.”

Voci wasn’t having it, though. He said White got involved in a discussion that had nothing to do with him and, in doing so, “ultimately caused the death of Mr. Schellenger.”

He acknowledged that the autopsy report presents some challenges from a prosecution standpoint, however.

“Race and socioeconomic status have nothing to do with this case,” Voci said. “Two human beings were involved in a conflict that ended in the death of a human being, plain and simple.”

For her part, Schellenger’s mother Linda said the hearing ensured that “justice is occurring” in a case that early on she slammed the DA’s office for not doing enough.

“I appreciate everyone making sure they heard the facts instead of all the innuendos and stories,” she said after the hearing ended.

Speaking on behalf of White's family, Greg Thompson and Bishop Ernest McNear of True Gospel Tabernacle Family Church in South Philadelphia would argue that the victim’s toxicology screening, and the testimony regarding race presented on Tuesday, most assuredly complicated matters.

“When this first broke, we heard it was a racial situation,” Thompson said. “We didn’t have that information, but now we have it.”

White, whose house arrest restrictions were lifted after the hearing, is due back in court for an arraignment on Nov. 20.