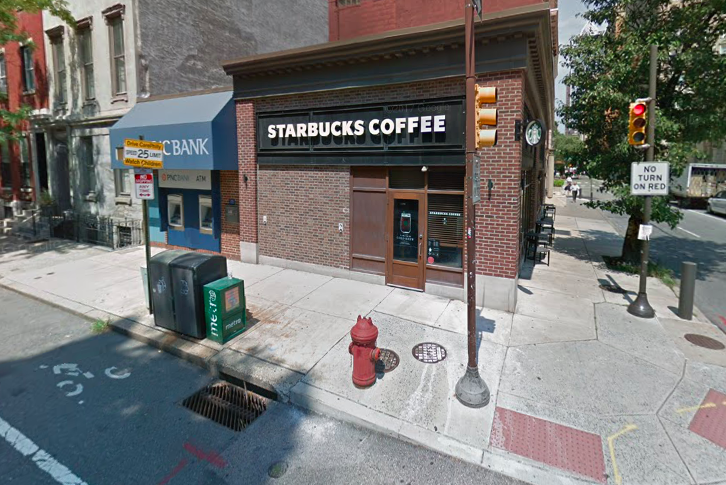 Starbucks at 18th and Spruce Streets in Philadelphia.

Authorities arrested two black men at Starbucks (18th and Spruce Streets) because they would not leave the store at the company's request, Commissioner Ross said.

One of the men asked to use the bathroom but was denied, per the company's policy, because he and his friend were not paying customers, according to Ross. The two men were deemed to be trespassing because they allegedly wouldn't make a purchase and wouldn't leave.

LATEST: Starbucks CEO apologizes to black men arrested at Philly store, wants to meet with them; Starbucks controversy at full brew on Twitter

A Starbucks employee called 911 after the men, both realtors who were waiting for a friend to arrive, refused to leave the store, the commissioner said.

Their friend arrived just as the men were being placed in handcuffs. He pleaded with officers for an explanation but was told not to interfere.

"These officers did absolutely nothing wrong," Ross said Saturday. "They did a service that they were called to do. They have a legal obligation to carry out their duties."

Amid a growing public uproar, Ross adamantly defended the officers' actions. They were compelled to execute the request of a private business to have the two men removed, Ross said.

The men were placed under arrest because they refused to leave the store when police asked them to do so, Ross said, including a police supervisor who was called to the scene after the initial dispute.

Ross added that as an African-American he is aware of implicit bias but did not find that to be present in this case.  The Philadelphia Police Department holds routine training to prevent such bias from influencing the decisions of its officers, he said.

"Anything less than that will not be tolerated," Ross said. "We will examine this case further to see if we can do things better in the future."

The commissioner also noted a separate incident at another Center City Starbucks in September 2015. In that case, a uniformed police officer was denied access to the store's bathroom because he was not a paying customer. Starbucks eventually apologized to the police officer.

In Thursday's case, Ross said, the two men were not charged because Starbucks employees later decided they did not want to prosecute.

Starbucks, facing outrage from across the country, issued an apology on Saturday afternoon.

We apologize to the two individuals and our customers for what took place at our Philadelphia store on Thursday. pic.twitter.com/suUsytXHks

By late Saturday afternoon, protesters had gathered outside the Starbucks where the incident occurred.

The protest is growing outside the @Starbucks. The woman on the right in the red shirt is 90 years old and told a story about her father who died when she was 9 as a result of racial profiling and police brutality. pic.twitter.com/DxQb5OYtSG

I am heartbroken to see Philadelphia in the headlines for an incident that -- at least based on what we know at this point -- appears to exemplify what racial discrimination looks like in 2018. For many, Starbucks is not just a place to buy a cup of coffee, but a place to meet up with friends or family members, or to get some work done. Like all retail establishments in our city, Starbucks should be a place where everyone is treated the same, no matter the color of their skin.

Starbucks has issued an apology, but that is not enough. I have asked the Philadelphia Commission on Human Relations to examine the firm’s policies and procedures, including the extent of, or need for, implicit bias training for its employees.  We are reaching out to Starbucks to begin a discussion about this.

Commissioner Ross and his team have promised a review of their policies moving forward with regards to response to complaints like this. I believe a thorough review is fully warranted given the unfortunate outcome of this event, particularly at a time when our criminal justice reform efforts are focused on avoiding needless incarcerations.

Ross concluded his remarks with an assurance that more information will be forthcoming in the near future.

Philadelphia police have launched an internal investigation into two controversial arrests Thursday afternoon at a Starbucks in Center City.

RELATED: No, Meek Mill isn't getting released from prison Monday

The incident, captured on video and posted on Twitter, occurred at the Starbucks on 18th and Spruce Streets. Two black men, who were not identified, are placed in handcuffs and led out of the coffee shop as confused witnesses press police for an explanation.

@Starbucks The police were called because these men hadn’t ordered anything. They were waiting for a friend to show up, who did as they were taken out in handcuffs for doing nothing. All the other white ppl are wondering why it’s never happened to us when we do the same thing. pic.twitter.com/0U4Pzs55Ci

A longer video of the incident — about eight minutes in length — was later uploaded to YouTube. The two men who were arrested appear calm throughout the encounter with police before they are placed in handcuffs. One of the officers can be heard saying the men were asked to leave the café for reasons that remain unclear.

The woman who posted the first video on Twitter later confirmed that both men have since been released without charges.

@TheQonFox @ShaunKing Thanks to @LAWimmerESQ, the Philly DA's Office declined to arraign, and both men were released from the 9th at approximately 2am.

In a tweet late Friday night, Philadelphia police said the incident is under internal investigation.

We are aware of an incident that occurred on 4-12-18 at the Starbucks Café at 18th and Spruce. The entire incident, including the actions of the responding officers, is under internal investigation. Once we gather all the facts, we will comment further.

Starbucks also issued a statement on the incident.

We’re aware of the incident on Thursday in a Philadelphia store with 2 guests and law enforcement, resulting in their removal. We’re reviewing the incident with our partners, law enforcement and customers to determine what took place and led to this unfortunate result.

The video of Thursday's incident, viewed more than 4 million times, generated an intense debate on Twitter about the tendency to make biased assumptions in cases involve racial profiling, as well as whether police or Starbucks should carry more of the responsibility for what happened.

Let me get this straight.

Two black men get arrested at @Starbucks for..........being black and being at starbucks.pic.twitter.com/H4iACrdVjo

The cops should be held accountable and Starbucks should should issue a public apology, donate money to causes that fight injustice and racism here in the US. Until they do that, I will stop going to Starbucks and buy any branded coffees they sell in stores.

This one is not on the police, it’s on Starbucks! If Starbucks calls and says we want these ppl out of our facility, police has no choice but to enforce it. Handcuffs can be justified as for their own safety. Textbook definition of racial profiling.

A Starbucks employee called 911 on 2 black men because they were waiting for a friend. To sum this up, a racist saw black men doing nothing & thought "How can I criminalize them?" People of color who work there should quit. We have to stop working for racists.#BoycottStarbucks

This @Starbucks thing is pretty awful. I feel sad for America right now. The stigma that some shows and news outlets portray of “black people are scary, or they’re criminals” over the years is one of the worst things that has happened. America has a lot of growing up to do.