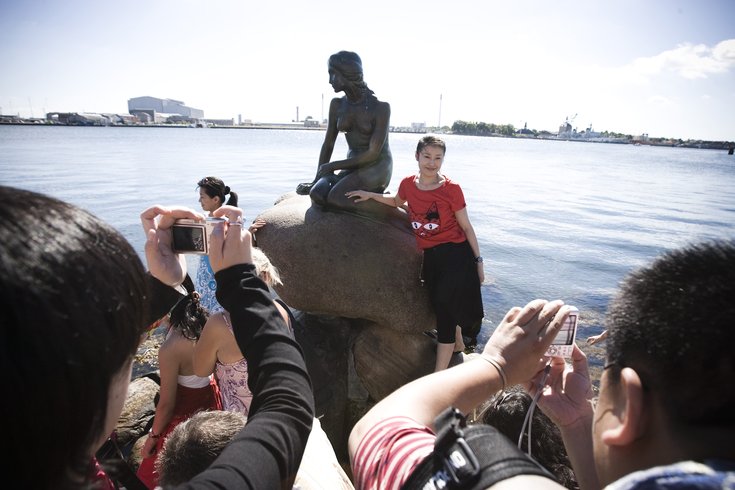 Tourists pose for photos at the site of The Little Mermaid statue, at the Langelinie Quay, Copenhagen, Denmark.

The live-action version of Disney’s “Beauty and the Beast” hits theaters nationwide on Friday, March 17 (or, if you have tickets for the advance screenings at the Roxy, tonight).

As with most cultural things these days, the revamp of a classic children’s film led to a poll. This one – helmed by a site called Decluttr – sought to determine which Disney Princess is most loved in each of America’s united states.

Belle, the beauty in the new film, was the most popular princess in six states including Pennsylvania and New Jersey. As for our other local state, Delawareans were more into Pocahontas than the others.

As someone who has lived in all three of those states – New Jersey while growing up, Delaware for college, and Pennsylvania since the turn of the century – these results are disappointing.

Why’s that? Sure, Elsa from “Frozen” and Pocahontas led the 10-character pack with seven states each, but I think Ariel from “The Little Mermaid” should sit atop.

The love story between earth-bound royalty and seaside mermaids is a timeless one of overcoming obstacles to follow one’s heart. Voters in New York, South Carolina and Texas agree with me. That makes me happy. "The Little Mermaid" is the perfect animated film; only @ me if you agree.

In any event, you can check out the results via this link. If you don’t have time to do so, here’s a list of the other winners (with number of states in which they were voted the top): Aurora from "Sleeping Beauty" (6), Cinderella (4), Moana (6), Mulan (3), Rapunzel (4) and Snow White (4).

But enough about having a grudge over others’ opinions of Disney princesses. Here’s a sneak peek of the movie that prompted the poll:

This looks pretty cool, but not as pretty cool as "The Little Mermaid," which probably shouldn't go the live action route since "Splash" already handled that.