This artist creates machines to talk to the dead 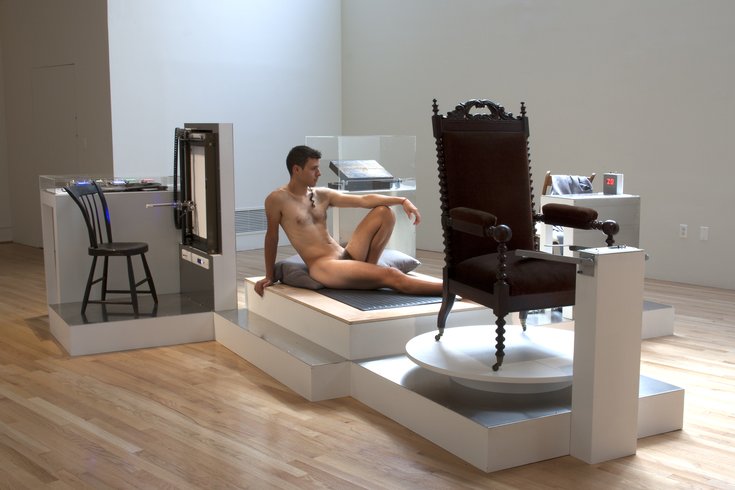 A naked model sits surrounded by Fernando Orellana's homemade art machines. The idea is to inspire the ghost of Thomas Eakins to drop by and use the machines to paint or draw.

Fernando Orellana is excited to show off one of the items he’s brought into the Pennsylvania Academy of the Fine Arts' Morris Gallery, but it’s not what you might expect. Orellana’s new installation, "His Study of Life," which opened on Saturday in PAFA's Historic Landmark Building, incorporates several artifacts belonging to the legendary artist Thomas Eakins: a wooden watercolor box, a well-used painting palette, a paintbrush and an armchair used as a prop in many of his portraits.

But at the moment, perhaps frustrated that the device he’s built to make that armchair rotate isn’t working as he’d like, the New York-based artist is downright giddy about a plastic “ghost meter” that retails on Amazon.com for $29.95. (“Fun — Simple — Thrilling!” boasts the clamshell box.)

In essence, the intricate assembly of gadgets that will occupy the gallery for the next few months is simply a large-scale version of this meter, which is basically the same electromagnetic field detector that you’d find in any hardware store, except it’s got “The Ghost Meter” stamped on it in orange letters.

"His Study of Life" is, at its core, a machine built for communing with the dead, one which offers the dead a chance to talk (or, in this case, paint) back. It’s targeted at one particular ghost — Eakins, who spent about a decade teaching at the Academy — though Orellana would be happy to hear from any art-loving spirit with the urge to express itself.

Not that he’s expecting to end up with a paranormal masterpiece.

“I’m one of the biggest skeptics when it comes to ghosts,” says Orellana, whose sweat-soaked NASA T-shirt (he was installing the exhibit in the midst of Philly’s recent heat wave) is more indicative of his mindset. “A lot of people ask me why I even make these work, but I want to be true to the design. It’s not that I’m waiting for the ghosts to come, but the challenge is ‘make something for the dead,’ so we’ve got to make it work for real.”

If the dead do have a desire to draw, however, Orellana’s installation will be their best opportunity to do it.

If the dead do have a desire to draw, however, Orellana’s installation will be their best opportunity to do it.

“For me, this is a design challenge,” he explains. “How do you make an interactive device for someone that doesn’t have a body? It’s sort of like bionics; if you don’t have a leg, there’s all these engineers and designers out there that have to figure out a way to make you whole again.”

The inspiration for Orellana’s “ghost machines,” which have been one of the primary focuses of his work in recent years, came from a chance encounter on the streets of Manhattan.

“I was walking in Manhattan with some friends and this guy, I don’t know if he was homeless or not but he looked rough, was standing on the corner talking to himself. When we walked by, he came up really close to me and said, ‘Hey, can you hear them? The dead are jealous.’ That stayed in my mind.”

Pondering the source of jealousy in the dead over the subsequent weeks, Orellana finally came to the conclusion that if the dead did, in fact, envy the living, it must be because we’re still able to interact with the world around us. So he set his mind on designing devices that would let the dearly departed do the same. 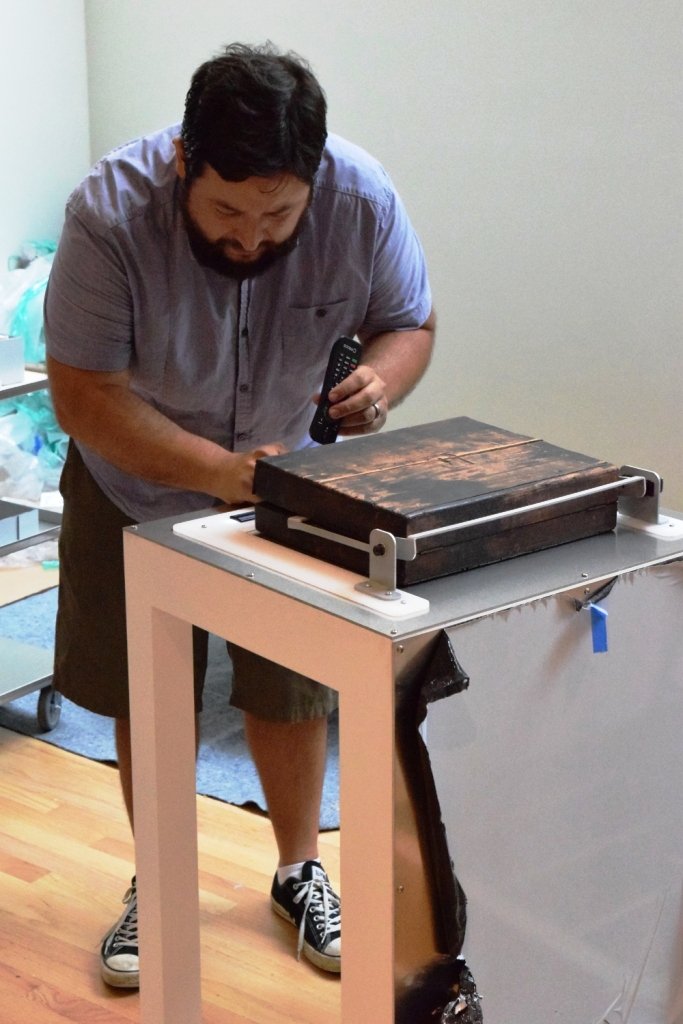 Fernando Orellana is hoping Thomas Eakins has something to say.

The PAFA show marks the first time that Orellana has modeled one of his ghost machines for such a well-known figure as Eakins. Deciding that the learning curve that comes with any new device would be lessened if he incorporated familiar items into his designs, he frequents estate sales to purchase items belonging to the deceased and that they might want to have another whack at using.

“One of the great things about working with a museum is that you can find out the history of objects,” he says. “You walk into an estate sale and you can’t necessarily go up to whoever’s selling and say, ‘Hey, I want to make these machines to maybe exorcise the dead.’ It just feels rude. So this is the first time I actually know the history of these artifacts.”

Though he’s also a painter who enjoys the direct connection between artist and canvas, Orellana has long incorporated technology and programming into his artistic practice. Growing up in Florida, he says, “My dad and my brother did a lot of tinkering with electronics. They made their own television set — it exploded. I was never really that interested in it, but I watched them and I think I got exposed to the language of it without knowing.”

Orellana went on to take art and technology courses at the Art Institute of Chicago, and tech has become such a part of his work that his Troy, New York, studio now is equal parts art studio and science lab. He also teaches at Union College in Schenectady, one of the rare liberal arts schools with an engineering program, allowing him ready access to minds with a better grasp on mathematics than his artist's brain. 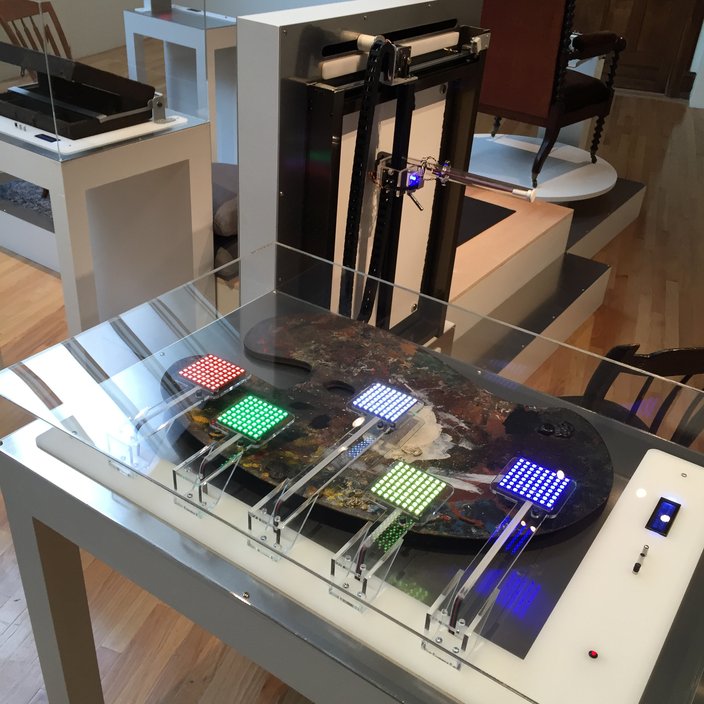 One of Fernando Orellana's art machines.

Orellana’s interest in the great beyond may also have subconscious roots in his early years, which involved crossing a more literal border. The artist was 5 when his family fled El Salvador to escape the country’s civil war.

“The transition from Spanish to English was a big definer of my future, for sure,” he says. “I’m a gringo completely now, but Florida, at the time, wasn't the Latino paradise it is now. It was rednecks and Everglades and that kind of s***, so there was a lot of racism. My parents brought their art collection with them from El Salvador, so we always had original art around. Most people don’t have that. They have Ikea art.”

"His Study of Life" incorporates four robots outfitted with EMF, temperature and infrared monitors. If a creative-minded specter chooses, one of the devices will open Eakins’ watercolor box; another causes the armchair to rotate; a third uses LED matrices mounted about Eakins’ palette to mix colors; and the final, most elaborate machine will actually allow the ghost to draw a picture. During the afternoon hours, live figure models will be present as inspiration.

While the title of the installation refers to the possibility of examining life from beyond the veil, it also suggests one of Eakins’ greatest contributions, his concentration on working from life. The use of nude models was controversial in his day and directly resulted in his forced resignation from the Academy in 1886.

“I think it’s a nice homage to allow him to look at the figure without compromise,” Orellana says.

“‘He came up really close to me and said, ‘Hey, can you hear them? The dead are jealous.’ That stayed in my mind.”

“It’s a way for us to bring an aspect of Thomas Eakins’ private legacy here at the Academy into the public eye,” says Jodi Throckmorton, PAFA’s curator of contemporary art. “That legacy still plays a big role in the Academy today.”

None of Orellana’s machines has yet to shake him from his disbelief, though some of the institutions where he’s installed his work have reported back about motion sensors going off in the middle of the night or revolving doors spinning on their own. Throckmorton reports that some museum staff and guards are more nervous about agitating the ghosts — many have had run-ins during the Academy’s less-populated hours — than about protecting the nude figure models. But Orellana is also willing to goose his own machine a bit, programming them to go off at random intervals (with sensors that read “artificial” so as not to try to fool anyone).

“I resisted that for a little while, but something curious happened,” he says. “People would report that they saw it go off but their buddy didn’t see it, so you create this ghost story.

“I’ve come to realize this work is kind of conceptual art because it happens in a belief structure. You can’t convince someone that there are no ghosts. It’s like telling them there’s no God. You’re not going to be able to fight them. By design, I’ve entered into this other realm.”

Fernando Orellana: "His Study of Life" 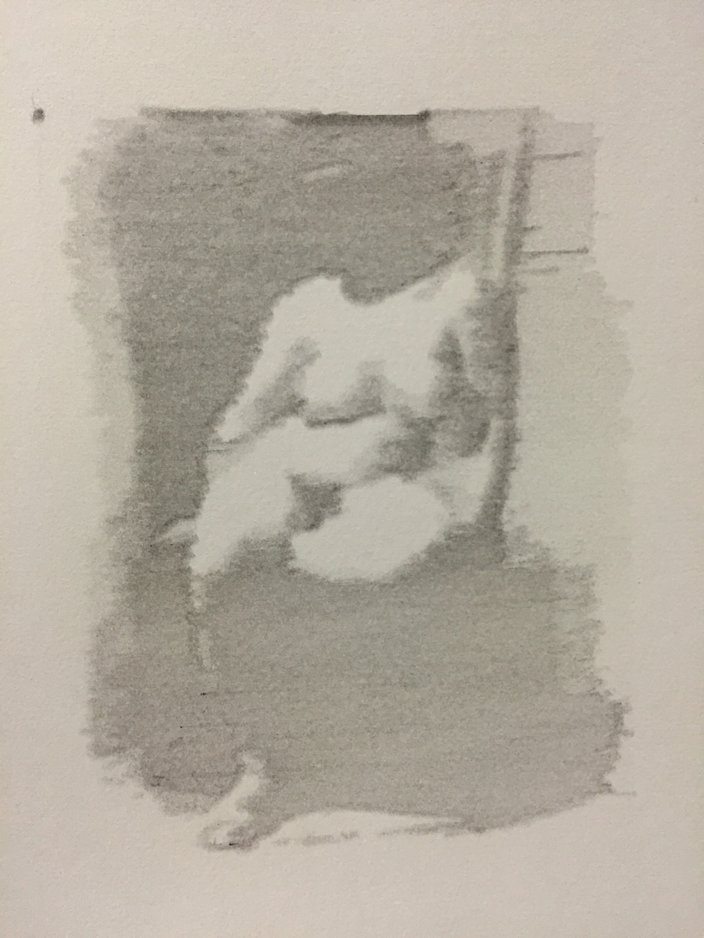 A drawing produced by one of Fernando Orellana's machines.