Ask Hickey: Why does the flag of a U.S. territory fly among the Parkway's 'Flags of the Nations'?

Puerto Rico, an American territory, has been granted nation-level respect in Philly since the bicentennial 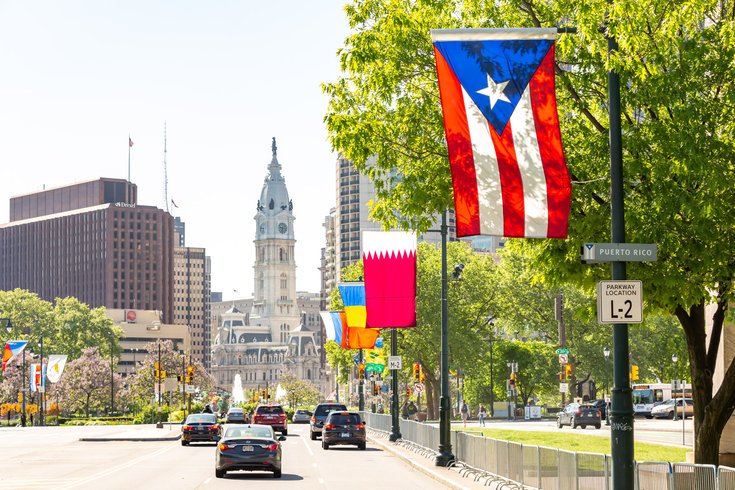 The Puerto Rico flag proudly flies in the 'Flags of the Nations' display along Philadelphia's Benjamin Franklin Parkway.

Among the international flags on the Ben Franklin Parkway is one for Puerto Rico, a U.S. territory. All the others are countries, not states. Is Philly perpetuating a Trump myth, that Puerto Rico is not a part of the USA? – J.S., via Twitter

They say all politics are local, and this question does nothing but confirm that mantra.

Yes, the president’s words and actions related to the American territory have raised cries of ignorance, spite and falsehoods.

But one thing that can’t be laid at his feet is the fact that the Puerto Rican flag – in its spot between Portugal and Romania near 21st and the Parkway – is the only one representing a non-nation among the “Flags of the Nations,” and that that inclusion is part of a conspiracy to minimize Puerto Rico's American-ness.

This, because he wasn’t involved in the decision to hang it proudly as part of a “colorful tradition (which) began in 1976 as a part of the bicentennial celebration.”

The City Representative’s Office is responsible for these selections, which number 109 after 19 were added in 2010 to better reflect “significant or growing populations” in Philadelphia.

I reached out to that office for some edification. For that, we turn to Randy Giancaterino, office spokesman.

"While the vast majority of the flags on the Benjamin Franklin Parkway represents countries, there are two notable exceptions: the Puerto Rican and the Vatican flags," he responded via email.

Considering that the Vatican has been a tiny country (or independent city state) since the Lateran Treaty was signed in 1929, the Puerto Rican flag becomes the most notable of exceptions!

Giancaterino said that more than official United Nations recognition has gone into the flag selection since the bicentennial year.

"Since then, others have been added due to changing global standings and advocacy from communities," he shared, noting that research showed that the flag was added in 1976. "Philadelphia has a vibrant Puerto Rican community, and members of that community take great pride in their identity as both American citizens and Puerto Rican people."

Even though I can kind of see where you're coming from with that question – this being the age of everyone being at everyone else's throats and settling on the worst motivations rather than relying on the benefit of the doubt – there's nothing untoward about Puerto Rico's proudly displayed in the "Flags of Nations" display.

In fact, quite the opposite: its inclusion honors a vital part of the Philadelphia family, even if the powers that be 130 miles to the south don't exactly treat their homeland with a similar level of (disaster-recovery) respect.