With Atlantic City casinos closing, how are former workers and city recovering? 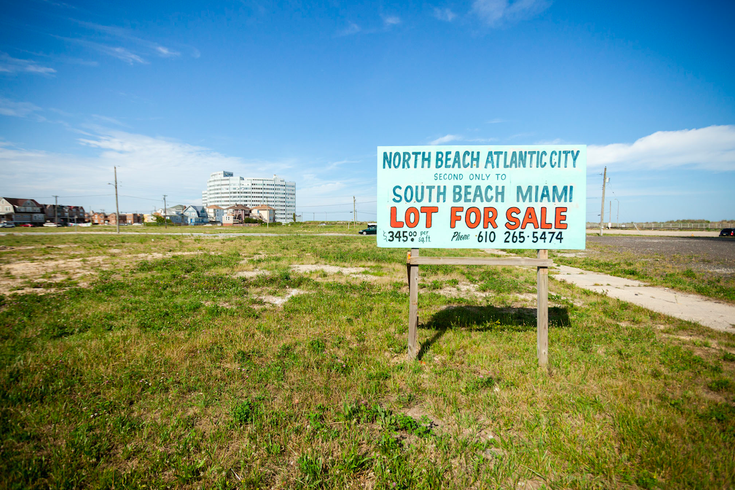 Multiple vacant lots the size of football fields are for sale north of the now-closed Revel Casino.

Jeanne Ferrante is part of Atlantic City’s new normal. She has a unique perspective on what normal is now.

Standing along a Mississippi Avenue parking lot, she can see the closed casino where she worked for more than two decades and the Bass Pro Shop retail giant where she now works.

She sees positive signs that the city is reinventing — the pier in front of Caesars is getting a makeover, a blowout beach concert featuring Maroon 5 is planned, casinos in the Marina section of the city, led by Borgata, are doing healthy business — but she still sees plenty to worry her as a resident, taxpayer and worker.

“People can’t afford to pay their taxes and the mortgage,” she said, adding many of her friends have moved away to take jobs elsewhere.

“They moved if they had a family to support. Many lost their homes.” She notes some friends who moved to Delaware are now facing cutbacks in their new positions as a result of competition.

Four years ago, Ferrante (pictured below) was an Asian games floor supervisor at Trump Plaza, where she worked since it opened in 1984. That’s when she got laid off. The casino offered to hire her back part-time at a smaller salary, without benefits. 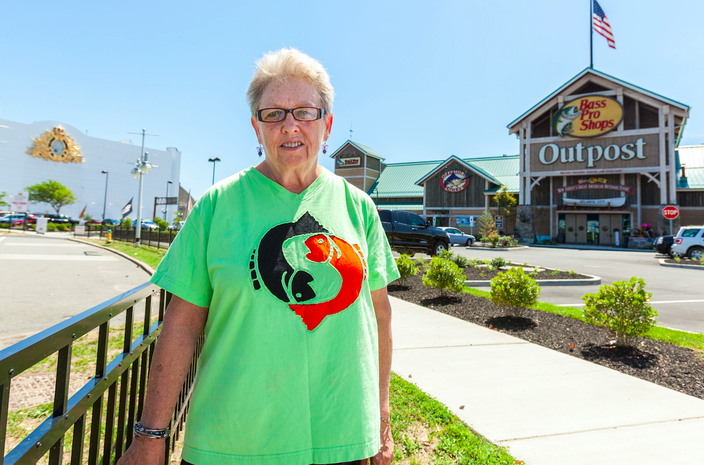 
Instead, she took unemployment until Bass opened in the spring. She says many of her new co-workers are casino veterans; a spokesperson for Bass did not respond to a request for comment.

Today, Trump Plaza is shuttered, a victim of bad management and convenience gambling, with Pennsylvanians and New Yorkers gambling closer to home, shrinking Atlantic City’s piece of the gaming pie.

Donald Trump, who had nothing to do with the casino by the time it failed last summer, has had his name scraped off the building, lest the zombie-like look of the empty casino haunt the real estate investor.

Ferrante now works across the street from the shuttered casino where she worked the bulk of her adult life.

She puts in about 15 hours a week at Bass Pro, earns a little above minimum wage and gets no benefits.

Related Gallery: What's next for AC?

Her old salary and decent benefits were enough for Ferrante to raise two sons, who are now adults living on their own.

At 67 she gets by, but the part-time low-wage work at the sports retailer — “an excellent company,” she said — would not have allowed the life she gave her children.

“It was a good living,” she said of her old life; she is also currently making do with Social Security.

And while parts of Atlantic City remain healthy and others are reinventing, there are still problems. Some 40 luxury condo units at the Bella, near the shuttered Showboat and Revel casinos, are scheduled to be sold off at absolute auction as remaining Atlantic City Boardwalk casinos continue to struggle

Investor Carl Icahn is keeping the bankrupt Trump Taj Mahal — again, no longer owned by Donald Trump — alive, but at the expense of benefits for unionized workers, a plan sanctioned by a bankruptcy judge.

That’s led to periodic protests (pictured below) around the casino and on the Boardwalk, including blocking recently repaved Pacific Avenue. 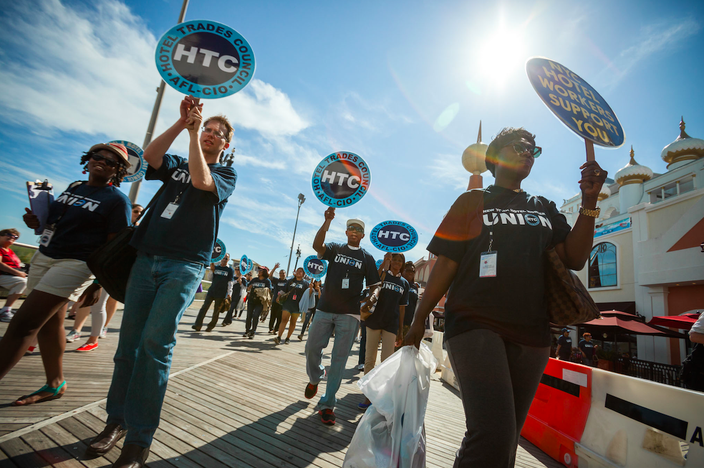 
And there remains the threat that New Jersey legislators will push for a referendum, as early as this November, allowing gambling in North Jersey or that New York state regulators may eventually allow a casino right over the border in New York City.

Either could harm Atlantic City’s attempts to stabilize, according to a union leader and a legislator.

“There was a contraction and now we are looking for stability,” said Bob McDevitt, president of Local 54, the largest union representing casino employees. "That’s no excuse for throwing out the remaining eight casinos

“We need time to take a breath and deal with it,” by shifting the emphasis away from gambling and toward all-around entertainment, McDevitt said.

He adds that the recently created Meet AC public relations campaign, aimed at bulking up MICE --meetings, incentives, conferences and events — is a right step for the city, but for now, many of his former employees are making do with part-time jobs that pay less than the casino jobs that were lost.

Atlantic City Mayor Don Guardian did not respond to requests for comment. The finances of his city are being overseen by the state. City and school district employees are getting trimmed as part of the new normal.

The casino meltdown and its aftereffects are “devastating Atlantic County,” said Chris Brown, an assemblyman who is pushing back on calls for allowing casinos in New Jersey outside Atlantic City.

“We can’t control what other states do,” he said. “But if we are serious about giving Atlantic City a chance to transition into a non-gaming destination, then we need to bring certainty to the market.

“If we suggest allowing casinos in North Jersey, that will hinder private-sector investment here. North Jersey will cannibalize what’s left here,” said Brown, suggesting such a change could take a decade.

Ferrante, who lives in the Venice Park section of the city and loves it, thinks the city is poised for a comeback but she hopes it will be sooner, perhaps five years, than later, mentioning crime, drugs and blight -- issues that still dog the city 37 years after the first casino opened.

“We needed casinos, but we needed reinvestment and that didn’t happen,” she said.