By Bryan Bierman
PhillyVoice Contributor
Bad For You Food
from 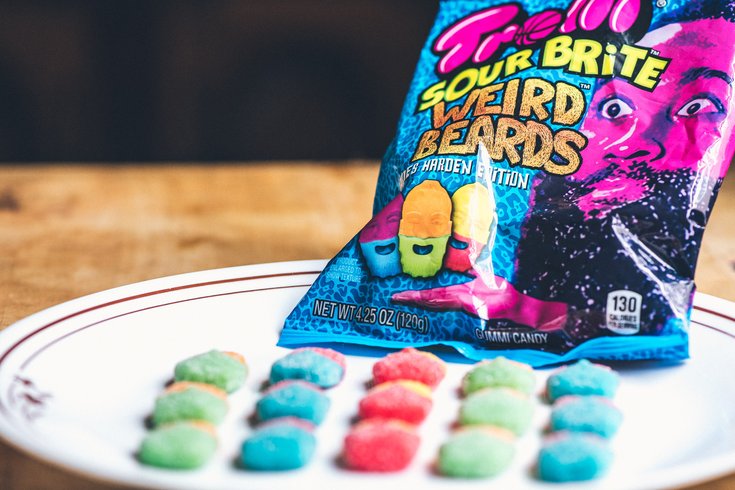 Trolli pays tribute to James Harden with blobs of fructose.

Over the years, the NBA and its players have made numerous crossovers with the world of junk and fast food. As Philadelphians, we witnessed this in 2002 with the release of the three now-cult classic Allen Iverson “bobbing head” dolls from McDonald’s. You best believe I showed up on Day 1 to score that sweet blue-jerseyed version for $4.99 with the purchase of any soft drink. Lil’ Answer sat on my dresser for years, nodding in approval every time I opened my sock drawer. You can sometimes still see him on windowsills around the city, dusty vestiges of the 76ers’ bygone greatness. (Sorry Sixers, but it’s true.)

Nine years earlier, McDonald’s aired the classic Larry Bird and Michael Jordan “Nothing But Net” commercial during the Super Bowl, further cementing the latter’s status as the face of the NBA and coining a still-quoted part of the pop culture lexicon. More importantly for the burger behemoth, it made them tons of money.
Jordan was far from the first basketball star to do tie-ins and product endorsements but he forever changed the game. His deals with Wheaties, Gatorade and Ball Park Franks, among others, made him tens of millions of dollars, way more than anyone in the league up to that point. This was in addition to his numerous non-food endorsements like his legendary Nike contract, which astoundingly still nothing-but-nets him over $100 million a year.
Magic Johnson was similarly entrenched in the snack business. As a player, he locked down endorsement deals with Diet Pepsi, KFC and Spain-based meat magnate Campofrio. Once he was retired, he moved behind the scenes of the food industry, purchasing the West Coast-based Fatburger franchise in 2001. He later sold his stake in 2003.
It’s one thing to advertise (or run) a fast-food chain, it’s another to get your face stamped right on the package. Lebron James had his own flavors of Bubblicious gum and Sprite. Kevin Durant had his own line of Nerds-filled slushes at Sonic. Shaquille O'Neal had multiple product lines — including Shaq Snaq candy, Soda Shaq drinks and Shaq Fu Punch.
Recently, gummy big shots Trolli bestowed upon Houston Rockets star James Harden the highest honor at their disposal: Not only has he been granted his own titular flavor of candy, but said candy that features his gummy likeness. As in: You can eat his little face. Enter Sour Brite Weird Beards: James Harden Edition.
In case you missed it, Harden’s dense beard has become something of a sensation among fans of both basketball and facial hair. “Fear The Beard” is a thing. Only now, you can stop fearing it and start eating it.
Yay! 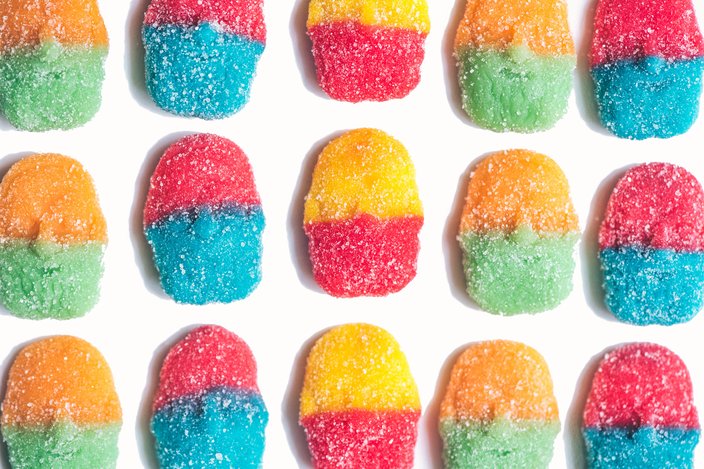 An experimental work of this grandeur requires “gummy artisans who work exclusively in the medium of gummy,” but Trolli — crafters of gummy worms, sharks and octopi — does not appear to have put its top people on the project.

Looking at this amorphous blob, nothing makes you think “beard” or “James Harden” or “human.”

Seriously, is this a Ditto? I’m about to throw a Pokéball at it.

It’s worth noting that Trolli’s current brand image and ad campaign smack of cynical, out-of-date people trying to tap into internet buzzwords and meme culture. With the catchphrase of “Weirdly Awesome,” everything related to the brand is so effortfully “wacky” and “random.”

The head of brand strategy for Trolli, Jill Manchester, told Forbes, "We want people to say WTF with our campaigns," which is just about the worst kind of sad pandering corporate business speak you could ever hear. You know there were hours of meetings in the Trolli executive boardroom on the use of the phrase “WTF” and if it was too “in your face” to reach peak profit margins. Trolli are trolls.

Tastewise, these are pretty close to the company’s Sour Brite Crawlers. There are very slight variations in flavors, in particular, the well-balanced tang of the strawberry/lemon beards, but mostly it’s just an instant too-sour, too-sweet sugar rush. They’re not much different from Sour Patch Kids, which out-gum the beards in taste and presentation. And if it went head-to-head with gummy kings Haribo, Trolli would get posterized.

I wonder: If the Houston Rockets had gone further into this year’s NBA playoffs — they were eliminated in the first round by the Golden State Warriors — would exclusive retailer 7-Eleven have kept the Weird Beards in-stock longer than a few months? I had a hard time tracking them down. There are bags on sale for around $10 on eBay, so perhaps James Harden’s candy will live on as a discontinued collector’s item, just like the snacks of all his fellow NBA stars.

Verdict: Unless you’re a diehard James Harden collector/beard-eater, stick with the regular gummies.