Bad For You: Crystal Pepsi in the age of commodified nostalgia

By Bryan Bierman
PhillyVoice Contributor
Bad For You Soda
from 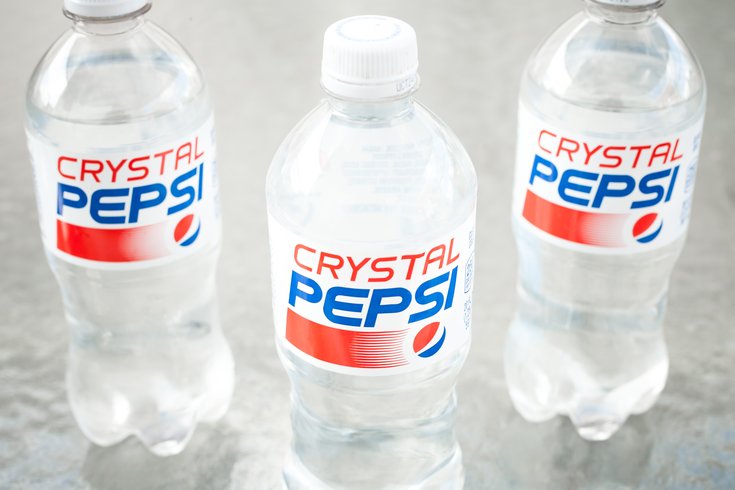 Crystal Pepsi is back — largely to satisfy the wayward nostalgia of people too young to remember it.

There is perhaps no more potent drug in this world than nostalgia. With time, things once released to the ether come floating back via remakes and reboots and recycled ideas. At times it seems we’re addicted to the past.

And the grace period between birth and rebirth is growing ever shorter. Nostalgia now happens quicker than ever.

The problem with these frequent waves of re-interest is that the past gets a rewrite with each comeback. Like light traveling through a clear bottle of clear soda, memories get distorted, however subtly. It’s mostly there on the other side but something’s been filtered out.

Over the past few years, internet culture has taken this game of pop culture whisper-down-the-lane a step further with Vaporwave, an umbrella term used for some of the most interesting music — and art, and design — this decade.

Like all sub-sub-subgenres, the categories and differences of what can or cannot be called Vaporwave can be minute and arbitrary, though roughly the idea includes a mix of the following: slowed down lo-fi samples of slick pop songs, a preoccupation with late ’80s and early ’90s consumer culture, outdated computer technology, VHS tapes, early internet aesthetics, the trappings of excess, lots of reverb, weird neon grids, pixel art, William Gibson and Japan. Also, roman columns and ferns for some reason.

The idea was to fight back against the seemingly untouchable corporate juggernaut by using its own ads against it.

If that seems like a random hodgepodge of things, well, that’s kind of the point. Vaporwave is an almost subconscious critique of consumerism from the inside, formed from years of media clutter. But unlike regular nostalgia for things you remember experiencing, the young age of many Vaporwave artists means that many of them weren’t even alive or cognizant enough to see any of their vaunted late ’80s/early ’90s relics in action. It’s a peculiar sense of nostalgia, a sort of imagined memory, pieced together with fragments of the aftermath.

It’s no surprise that Pepsi — one of the most visible and ubiquitous companies on the planet — has had an impact on Vaporwave culture. Their logo often pops up in its art, while one of the biggest names in the music side goes by the name of Saint Pepsi.

But Pepsi’s biggest stamp on Vaporwave comes from an unexpected and (at least for the company) unwanted source. In 1997, avant-garde pranksters Negativland released “Dispepsi,” an album-length critique of rampant commercialism which uses the soft drink as a jumping off point to show the ugliness of advertising and its negative effects on the consumer. Sampling everything from Michael Jackson, “Mommie Dearest” and interviews with soda industry bigwigs, as well as the soda giant’s own marketing, “Dispepsi” is a dense and oddly moving masterpiece.

Career fair-use activists, Negativland indicated in “Dispepsi”’s liner notes that "All of the cola commercials that were appropriated, transformed and reused in this recording attempted to assault us in our homes without permission.” The idea was to fight back against the seemingly untouchable corporate juggernaut by using its own ads against it.

Negativland’s sonic and aesthetic recycling as a critique of capitalism was an early predecessor to Vaporwave. However, being years removed from the source material, these young artists are imbued with an ingrained nostalgia for the same capitalist images they’re disgusted by.

Where “Dispepsi” was an open takedown of consumerism, Vaporwave is less explicit in its motives. On the surface, it may come off as cold and distant, but there’s also a sense of beauty and childlike wonder in its images.

There’s an inherent love/hate relationship going on here. And even if it’s a tiny bit of love, for a major corporation trying to maximize profits, this is equivalent to a shark smelling blood in the water — “How can we make money off this?” 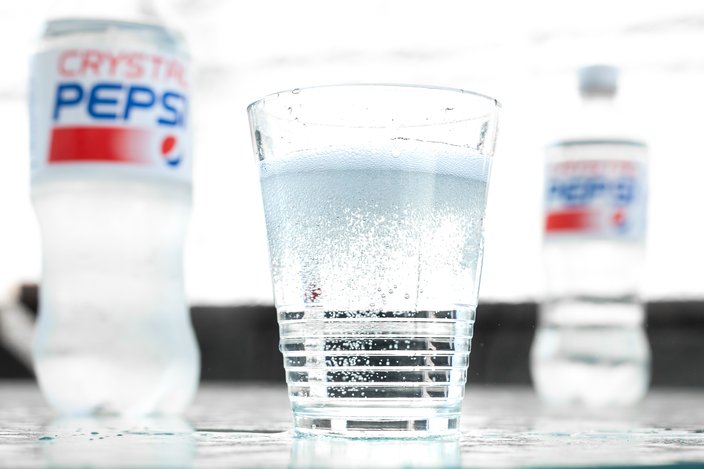 Without the caramel food coloring, a citrus flavor emerges.

So what was this miraculous new drink?

It was Pepsi without caffeine and caramel coloring. And it smelled and tasted more like chemicals.

I was only five at the first coming of Crystal Pepsi and I distinctly remember not quite getting it. It was the same soda, just clear? What’s the point of that? Why do we need this? “Why is this commercial?”

By fall of the following year, Crystal Pepsi was being pulled due to poor sales.

It was a completely unnecessary product based entirely on aesthetics and marketing. If there was ever a product one-hundred percent tailored to the Vaporwave generation, it’s Crystal Pepsi.

Twenty years after its demise, YouTube star and competitive eater L.A. Beast purchased an original bottle of Crystal Pepsi on eBay, drank it and eventually vomited it back up. The video currently has over 14 million views.

Inspired by a fan-started campaign that led to the return of Coca-Cola’s Surge soda in 2014, L.A. Beast launched a years-long internet crusade to bring the translucent drink back into production. The first sign of success — the soda giant offering Crystal Pepsi as sweepstakes prizes in late 2015 — was just a prelude to the big announcement: an eight-week relaunch in summer of this year.

Perhaps it’s not a great omen for Pepsi that the relaunch was kick-started by a man most famous for projectile vomiting their product.

Perhaps it’s not a great omen for Pepsi that the relaunch was kick-started by a man most famous for projectile vomiting their product.

With this re-release, however, they’re not really selling a soda, they’re selling nostalgia, although it’s the same twisted nostalgia that birthed Vaporwave. The target audience is primarily people who weren’t around for it the first time. The author of a change.org petition to bring back the soda that garnered more than 38,000 signatures admitted he’d never even tasted the drink.

The marketing campaign this time around has all of the anachronisms and random pop culture mish-mashing of a vaporwave artist’s Tumblr: A promotional launch concert entitled “Summer of ’92” included Lisa Loeb, who didn’t hit the charts until ’94; Crystal Pepsi’s own Oregon Trail game features mix CDs and Tamagotchis, technologies that weren’t readily available during the soda’s lifespan (let along when the West was settled); the website the game appears on features art and a layout reminiscent of early make-your-own-web pages that were introduced long after the drink had already fizzled out.

This may not seem like a big deal, but maybe it is. This sort of pick-and-choose revisionism can snowball into a false past utopia that for a lot of younger people, then becomes the truth.

For the folks who were around during these times, it all gets tangled up with the emotional comfort of supposedly simpler times, thus giving rise to “Back in my day …” faux-halcyon B.S. that the members of the stereotypically cynical Generation X and (ironically) The Oregon Trail Generation rallied against.

That’s how you end up with “Make America Great Again” and “Remember how good Crystal Pepsi was?”

Crystal Pepsi was not good. In fact, if I may quote the ’90s, it “blew chunks.” It sucked then and it sucks now even with the addition of caffeine. While it tastes a lot like Pepsi, there’s still something slightly off. It has a subtly citrusy tint to it. This might have something to do with the lack of caramel coloring.

In the waning days of the first Crystal Pepsi epoch, the company amped up the citrus flavor and called it Crystal From Pepsi. Seems like they were finally ready to admit couldn’t get the taste right and decided to just go with it.

Crystal Pepsi also still smells weird, which is how I could immediately tell the difference in a blind taste test.

It’s worth noting as well that there’s something of a subliminal uneasiness to drinking something that you know is not the right color. Pepsi is brown. My brain knows this. I had the same problem with purple ketchup as a kid. It must be some sort of caveman survival instinct.

Listen, I lived through the ’90s. Some of it was great. Some of it sucked. I would imagine the same goes for every time period.

For the sake of the next generation, let’s try to be as transparent as we can about the past. No matter how much corporations try to airbrush our memories and cash in on our nostalgia, we have to fight it. Maybe we need a new “Dispepsi” to keep us in line.

To the younger people, I hope that finally tasting this mythical beverage — and your almost guaranteed disappointment — has taught you to be wary of pop culture hype and rose-colored rear-view mirrors.