Barber's mission: haircuts for the homeless

Braden Day said he used to own a construction business in South Jersey, but when he and his fiancée relapsed into drug addiction a couple years ago, “we lost everything within a matter of months.”

Today, he considers the Broad Street Ministry on South Broad Street home. During the day, he sits at 15th and Walnut streets accepting donations from strangers to get by. He wants to get into a detox program, but said the lack of insurance has made that impossible.

Around lunchtime on Thursday, a traveling barber named Brennon Jones saw him sitting at his regular Center City corner. After watching passersby pretty much ignore Day for a few minutes, he approached with a question.

“Do you want a haircut?” he asked.

It’d been a while since Day had one. He knew his hair “looked like a mop on top of my head.” The answer was a shocked and grateful "yes."

“I was completely blown away that someone wanted to do something nice for me,” said Day, whose hair would soon blow away down the Center City sidewalk.

With that, Jones – a 29-year-old who moved to West Philadelphia from Chester last year – had his first Philly client for the “Haircuts 4 the Homeless” mission that he said came from “my heart.”

“My job is to go out and let them know that people still care.” – Brennon Jones

Sporting a “Serving God, Serving Others” shirt, he hooked clippers up to a car battery that he purchased after a GoFundMe push met its $1,000 goal within a week, broke out his scissors, and got to cutting hair.

“So many people walk by and don’t even acknowledge these guys who need help. They look down on people they don’t even know,” explained Jones of what inspired him to approach Day after a homeless man across the street declined his offer.

“I just wanted to provide something different than some change or a couple dollars," he continued. "I’m blessed with a talent, so why not share it and make someone’s day? I just wanted to give back.” 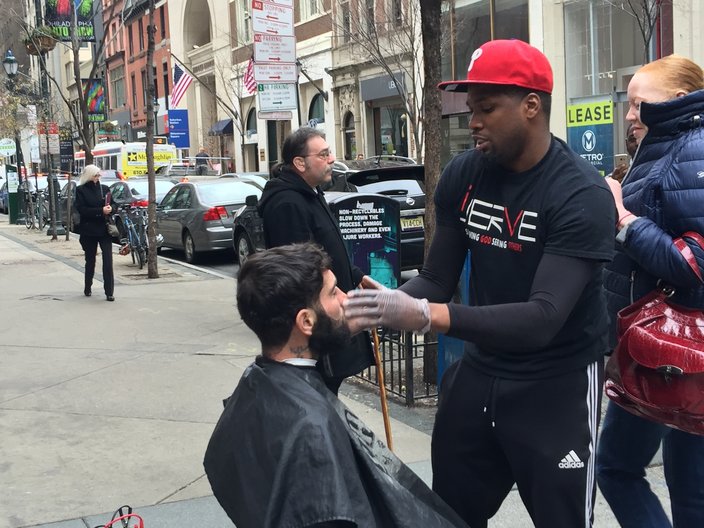 Brennan Jones, a barber who moved from Chester to West Philadelphia last year, said he will travel across Philadelphia and neighboring towns to give haircuts to as many homeless people as he can in 2017.

Overwhelmed by the response to his #Haircuts4TheHomeless, Jones handed Day a collection of toiletries – also purchased with GoFundMe donations – and spoke about how the effort will continue throughout the year in Philadelphia and neighboring municipalities.

“I’ll be out here every day that I can. I’ll go out to West Philly, North Philly, every section of Philadelphia, Chester, Camden and cut hair,” he said, noting that he hopes to meet hundreds of homeless men and women in the coming months. “Then, I want to rent a hall and have a big dinner for them all to come to. I hope to do that sometime around Thanksgiving.”

Moments after Day checked out his new do in a mirror that Jones held up for him, the client said the random encounter gave him faith in the kindness of strangers, many of whom approached his stylist to hand him money and laud his compassion.

That played into Jones’s ultimate goal.

“My job,” he said, “is to go out and let them know that people still care.”

"This isn't a one-time event. And though we've reached our goal, please continue donate and share. Doesn't just have to be monetary, your time is just is also appreciated as well,” it reads. “THANK YOU AGAIN!”