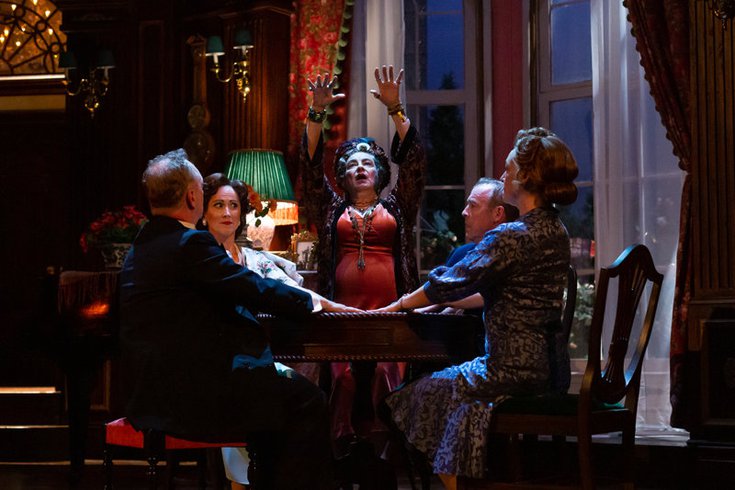 In this hilarious production, novelist Charles Condomine and his second wife, Ruth, invite the eccentric medium, Madame Arcati, to perform a séance. But Charles’ spiritual skepticism vanishes when the ghost of his deceased first wife, Elvira, accidentally materializes—but only to him. Elvira’s still in love and wants Charles back, and is not about to let a little thing like death stand in her way! From the delightfully wicked mind of Noël Coward comes BLITHE SPIRIT, where love and marriage devolve into laughter and mayhem – and ‘Till Death Do Us Part’ no longer applies.

Get your tickets to this must-see comedy now!

MORE ABOUT THIS PRODUCTION:

English playwright Noël Coward, known for his biting wit and distinct sense of style, wrote BLITHE SPIRIT in 1941. At the time, Coward was visiting Wales as his office in London had been destroyed in the Second World War. On this trip, he developed his idea for a playful comedy about ghosts and timeless romantic relationships. The play premiered in the West End that year, where it was met with critical acclaim for its mixture of farce and dark humor. The Walnut’s production features an all-star cast of Philadelphia actors, with a pair of married actors playing an onstage couple in this clever story of romantic and supernatural mishaps.

Walnut Producing Artistic Director Bernard Havard will bring Coward’s classic to the stage as director. Havard’s Walnut directorial credits include A Woman of No Importance, The Humans, God of Carnage, ART, Someone to Watch Over Me, Skylight, and Driving Miss Daisy. He has spent his life in theatre as an actor, stage manager, director, managing director and producer. Recognized as one of America's leading theatre producers, he has proudly served America’s Oldest Theatre for over 39 years. Under his leadership, the Walnut became a not-for-profit, self-producing theatre and has gained international recognition as one of America's premier regional theatres. 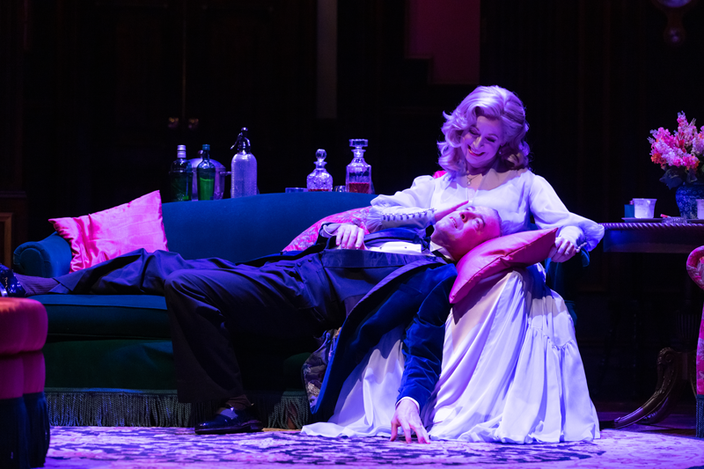 Mark Garvin/For Walnut Street Theatre
Actors Ian Merrill Peakes and Karen Peakes, a real-life married couple, will lead as Charles and Ruth Condomine. Ian, assuming the role of the self-absorbed author, is a Walnut veteran with credits including The Adventure of the Speckled Band, A Woman of No Importance, The Curious Incident of the Dog in the Night-Time, and Matilda. A proud Philadelphia actor, this will be his 134th professional production in his distinguished career which has earned him numerous regional theatre awards. Karen, who plays Charles’ strait-laced second wife, Ruth, has been seen on the Walnut stage in plays such as Speckled Band, A Woman of No Importance, The Curious Incident..., A Comedy of Tenors, and Fallen Angels. Her Philadelphia theatre experience includes work at The Arden, People’s Light, The Wilma and more. When not on the stage, she is also an Audie Award- nominated audiobook narrator of over 80 titles.


Scott Langdon and Susan Riley Stevens return to the Walnut to play Dr. and Mrs. Bradman. Audiences will remember Langdon’s work at the Walnut in productions such as I Love a Piano, The Music Man, Love Story: The Musical, The Wizard of Oz, and many more. His work in regional theatre has seen him in shows like Spamalot, Oliver, and 1776. Stevens was last seen on Walnut’s Independence Studio 3 in Meteor Shower, and her work at the Walnut also includes The Curious Incident..., Noises Off, Fallen Angels, God of Carnage, and A Streetcar Named Desire. She has performed at other theatres across the country, including Actors Theatre of Louisville, Dallas Theatre Center, and Portland Stage Company. 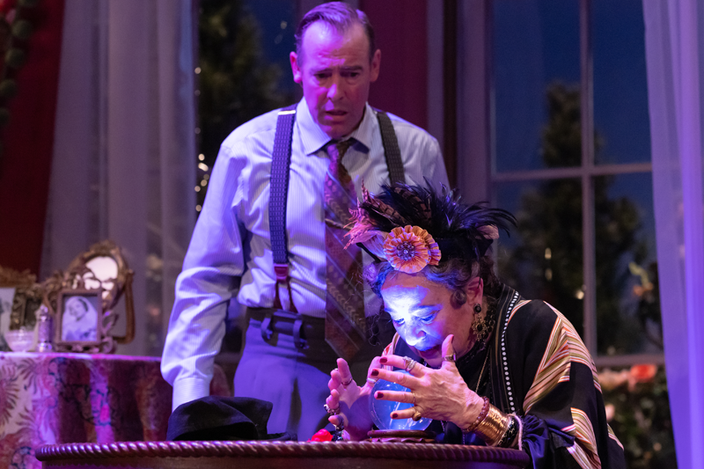 Mark Garvin/For Walnut Street Theatre
Philadelphia actress Alicia Roper will haunt the stage as she plays Elvira, the deviously lovelorn ghost of Charles’ deceased first wife. In addition to her work at theatres such as Yale Repertory, Cleveland Play House, and Seattle Children’s Theatre, her Walnut credits include A Woman of No Importance, The Curious Incident..., Beautiful Boy, and The Philadelphia Story. Mary Martello returns as the extremely quirky medium, Madame Acarti. Martello has been in over 30 productions at the Walnut, including Young Frankenstein, Annie, The Humans, and 9 to 5. In her award-winning career, she has performed at Philadelphia theatres such as 1812 Productions, The Wilma, and The Arden. Amanda Jill Robinson, a Philadelphia-based actress, composer, and theatre educator, plays the Condomine’s maid, Edith. Robinson’s work at the Walnut includes The Gifts of the Magi and Winter Wonderettes. In addition to work at 1812 Productions, Act II Playhouse, and more, Robinson is a founding member of The Greenfield Collective.


Scenic Designer Roman Tatarowicz (A Woman of No Importance, Meteor Shower, The Curious Incident...) returns to the Walnut to bring audiences into Charles Condomine’s lavish living room. Creating the stylish outfits of 1940’s England is Costume Designer Mary Folino (The Little Mermaid, Beehive, Shrek The Musical). Wig Designers Will Vicari and Krystal Balleza (The Little Mermaid, Shrek) join Folino to complete the looks for the characters. They are joined by Lighting Designer Shon Causer (The Adventure of the Speckled Band, and A Woman of No Importance) and award- winning Sound Designer Christopher Colucci (The Adventure of the Speckled Band, A Woman of No Importance, and A Comedy of Tenors).