'If you are not moved by the conclusion of their journey, you have less emotion than a Vulcan'

As someone who has been leery of the new "Star Trek: Discovery" TV series since it was announced – and who has grown even moreso with each subsequent announcement (the female lead character is named "Michael?" Really?) I was still intrigued when I heard that the show's first book tie-in would be released and written by longtime "Trek" scribe David Mack.

Why? Because, quite simply, the "Star Trek" line of books has almost always been of consistently high quality through the decades. In the beginning, novels of the original series kept "Trek" fandom both fed and hungry during the years when the most they could look forward to was a film with Captain Kirk and the gang every few years.

At the peak of the popularity of the "Star Trek" franchise, from 1987-1995, when the original crew, "The Next Generation," "Deep Space Nine" and "Voyager" all had high-profile launches, runs and/or finishes, Pocket Books churned out enough novels to fill a library, and with authors such as Peter David, Michael Jan Friedman and Christie Golden, the quality and fan interest was consistently high.

The one feature that was both a positive and a negative at the same time was that these tales were giving us more of characters we already knew, and so we expected them to act certain ways, react certain ways and say certain things.

With that in mind, I decided to not watch "Discovery" on TV until I was done reading Star Trek: Discovery: Desperate Hours, the first tome to tell a tale with these characters. I wanted to see if they could hold my interest with no preconceptions from watching the TV coloring how I felt they should talk and act.

I wanted the book to succeed or fail in entertaining me completely on it's own.

The verdict? "Desperate Hours" is scintillating stuff that has breathtaking action and suspense. Most importantly, it carries an emotional wallop.

Why? A variety of reasons. One of the keys is that the creators of "Discovery" have the series taking place while Captain Pike, not Kirk, is captain of the Enterprise, which means that Number One, not Mr. Spock, is the intellectual, problem-solving second-in-command and that Spock is at a point in his career where he is young and has the qualities that would make him a legendary icon, while not attaining that status yet.

It is a tribute to previous "Trek" writers that they have woven Captain Pike, Number One and a young Spock into so many stories and made them part of the tapestry of "Trek" rather than forgetting and discarding them as part of a failed pilot. 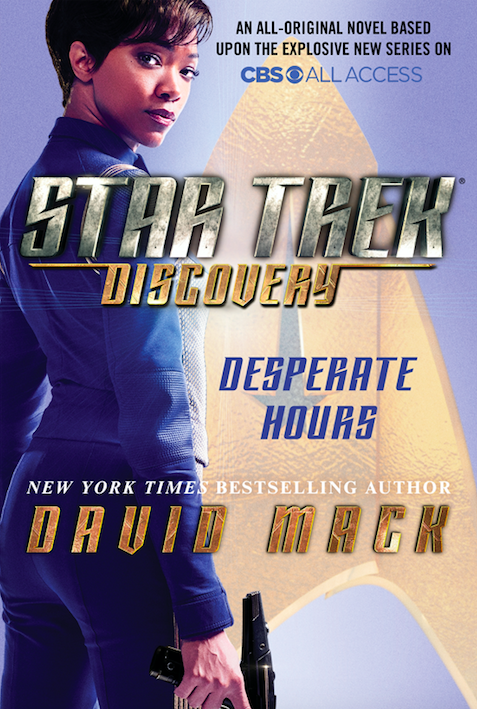 Also, by making the characters work with the first Enterprise crew instead of Captain Kirk and company, it makes these younger, newer characters holding their own with them more believable – and the book less predictable.

Having Captain James T. Kirk willing to sacrifice a whole planet of beings using the defense of "following orders" would seem out of place, but we can believe it with Pike because we haven't enjoyed over a hundred stories in which he clearly would act differently.

Mack's having Pike match wits and ships with Captain Philippa Georgiu carries even more impact when one realizes she is about to have as tragic a short-lived an on-screen career as Pike.

Having Saru have Number One/Una to play off of is more interesting than if he had been coupled with a young Spock, since they are so much alike.

But the star of the book is the star of "Discovery," Lieutenant Michael Burnham, which is saying something when a character is in the same book as Spock, arguably the most popular and iconic character in the history of the franchise.

The ties and bonds we find they both share – and how they work together to defeat a seemingly invincible foe in a way only beings of their logic and intellect could dream of, allows both characters to surprise us and grow. If you are not moved by the conclusion of their journey, you have less emotion than a Vulcan."

By the end, it is clear they have helped each other immensely, in addition to saving the day.

Under Mack's expert hand, what Spock learned from Burnham set an important part of the foundation down to him becoming the iconic legend he was destined to be. Meanwhile, her interaction with Spock has instantly given her gravitas and seems to have her on the way to being as important a character – or at least as memorable – as the most "fascinating" "Trek" character of them all.

If the quality of the TV scripts is as good as Mack's writing here, I can't wait to see what Burnham and the rest of the "Discovery" crew do next.