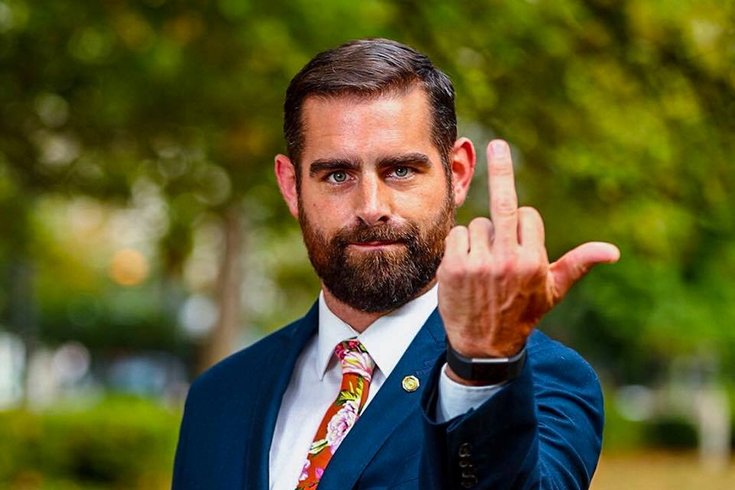 Protesters flocked to Rittenhouse Square on Tuesday to protest a Philadelphia visit from Vice President Mike Pence, demonstrating on behalf of the more than 2,000 children who have been separated from their parents at the U.S. border with Mexico.

Among those hoping to send a message to Pence was state Rep. Brian Sims, the Democrat from Philadelphia who is Pennsylvania's first openly gay state legislator.

Sims — who is frequently outspoken on social media — posted a picture on Facebook of him giving the vice president the middle finger. In the post, he wrote that he wanted to "officially welcome" Pence to the city with the gesture. The post reads:

To be clear, we’re a City of soaring diversity. We believe in the power of all people to live and to contribute: Black, Brown, Queer, Trans, Atheist, Immigrant, we want you and we’ll respect you.

So keep that in mind while you’re here raising money to attack more families, spread more lies, blaspheme with your bible, and maybe even talk to a woman without your wife in the room. We have plenty of them, and they’re pretty much all more powerful and more real than you have ever been.

"Honestly, glancing at this you would think the residents of Philadelphia voted in a member Antifa," Meehan said, referring to the anti-fascism activist groups that have often protested in the city.

"Once again, the best way to express outrage over this behavior amongst members of the Democratic Party – that has become entirely too common – is in the voting booth every election," Meehan continued.

Sims responded to much of the criticism of his post on Twitter, particularly from those who said Sims showed a lack of respect. The representative argued that President Donald Trump's administration has not afforded others the same respect and dignity with the president's policies — particularly with the detention of children separate from their parents who have been accused of crossing the border illegally. In other cases, it was just a trading of insults.

I was trying to explain to my 8yr old son today why it’s important to treat people with respect and to act with well-thought reason and not just simple emotion. Wouldn’t ya know it, this great example why that so important popped right up on my feed! https://t.co/b95uOPMiGA

Wait, you were able to explain in less than one day why locking children in concentration camps is OK. Grabbing women by the pussies is OK. Making fun of the disabled is OK. Colluding with our national enemies is OK. But you got hung up on a middle finger?!? #SoVirtuous https://t.co/rRV9hGHK4A

Your got the market cornered on brave there, Jeremy! 🤣🤣🤣🤣 pic.twitter.com/l7fTOJqHER

Yeah, well all the time we’re wondering why the Right puts children in Concentration Camps....so not the same really.

Yes, you’re definitely an expert on candor, courage, and BS. Wait, you actually have a broken moral compass so save your rant for someone who doesn’t see right through you. pic.twitter.com/3MjnobNwYK

There were also many who applauded Sims' post, as well as his subsequent defense of using the gesture.

Nothing but respect for my president, Brian Sims.

all fingers considered Brian Sims is coming for blood on his twitter and it’s really great. every elected official should be screaming right now. https://t.co/slDldxXsxs