Bride loses bet, groom gets to wear Eagles jersey to his wedding

She lost fair and square though 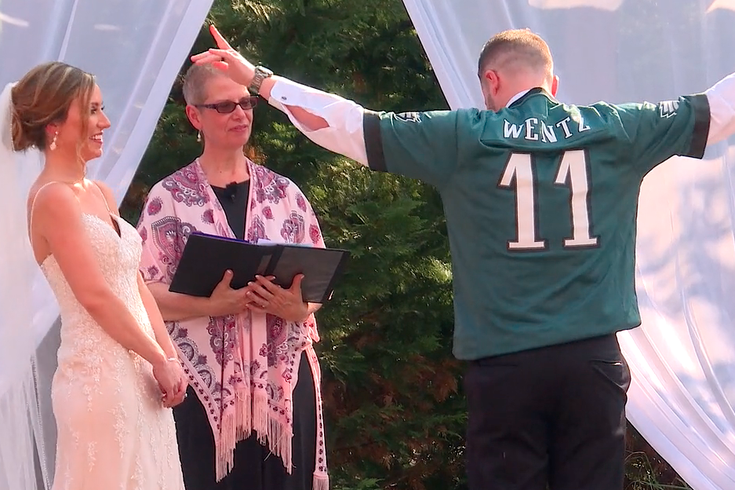 During their wedding ceremony, Patrick Hanks unveiled the jersey.

Since the Eagles' Super Bowl victory, Philadelphians have indulged in so many celebratory schemes.

We threw the Mother of all Parades. We got tattoos. We climbed poles. We made Eagles alcohol.

But the latest one really proves that nope, sorry Patriots fans, we are nowhere near being finished.

During a Conshohocken, Pa. couple's nuptials, a bet was settled properly.

A viral video of the ceremony shows the bride settling a bet that if the Eagles won the Super Bowl — which they did, if you forgot — her groom could wear a jersey at some point during the wedding. And he did.

Watch it all go down here.

Their names are Jennifer and Patrick Hanks, and they were married Memorial Day Weekend.

The newlyweds told The NY Post that the bet began last October at a friend’s wedding after-party. A mutual friend posed a bet to Jennifer: If the Eagles lost the 2018 Super Bowl, he would watch every episode of her beloved “The Real Housewives” — every. single. episode.

And if Jennifer lost ...

We all know how this ends. But if you don't, just for good measure, I will reiterate that the Eagles won the Super Bowl this year.

Jennifer settled up during the ceremony after the couple exchanged rings and vows.