City Council president: Spring Garden man was 'the caring, thoughtful neighbor all of us want' 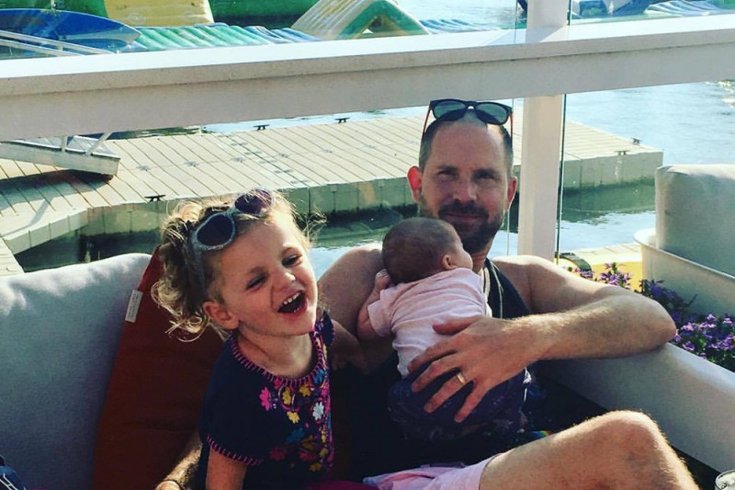 Gerard Grandzol, shown in a picture on a GoFundMe page for his family, was shot and killed Thursday night in an attempted carjacking outside his Fairmount home, police say.

Police arrested two brothers Saturday night in the fatal shooting of a Spring Garden activist who authorities said was killed in front of his 2-year-old daughter.

Maurice Roberts, 21, and his 16-year-old brother are in custody, a Philadelphia Police spokesperson said Saturday evening.

Grandzol reportedly had just driven home from Lemon Hill, where he had been playing Frisbee with his daughter and the family's dog.

Police said two men approached Grandzol after he pulled up to his block. They allegedly demanded his wallet and then his car. Grandzol told them his daughter was still inside before he was shot from point-blank range, police said.

He was taken by police to Hahnemann University Hospital, where he died at 9:42 p.m. Thursday, according to multiple reports.

"The victim cooperated with the robbers. It appears he was shot while explaining to the shooter that his daughter was in the back seat of the vehicle," the spokesman said.

FOX 29 reported that Roberts and his brother ran from the scene, dropping Grandzol's wallet along the way before heading down to the Broad Street Line stop at Fairmount Avenue. SEPTA cameras helped police identify the two suspects, the station reported.

Grandzol's death shocked the neighborhood in which he played an active role.

I am so irate about the senseless murder of Gerard Grandzol cuz he loved Philly. He loved my city. He saw the beauty in it. Now he is gone.

You were a good guy who did not deserve this ending. I'm deeply saddened to see you go. RIP Gerry Grandzol.

He was reportedly a member of the Spring Garden Civic Association, and City Council President Darrell Clarke called Grandzol "the go-to guy in that community" in a Friday Philadelphia Inquirer report.

Clarke also tweeted about the shooting, saying Grandzol was "the caring, thoughtful neighbor all of us want."

"Grieving for his family. This insanity must stop," he tweeted.

Gerard was the caring, thoughtful neighbor all of us want. Grieving for his family. This insanity must stop. https://t.co/6bxdAfnbUs

A GoFundMe page for Grandzol's family had raised nearly $80,000 by Saturday evening.

"We blindly lost a beautiful soul on September 7th, who tragically gave his life to protect that of his two year old daughter," the page reads. "We will never be able to replace the love, laughter and light that Ger brought to our lives, but perhaps we can do our part to help provide for his two children and widow. We love you Ger."