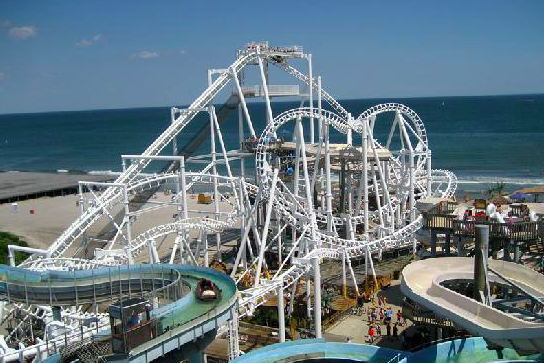 Fly, formerly known as The Great Nor'Easter, at Morey's Pier in Wildwood.

Visitors to Morey's Pier next summer will be riding a new and improved Great Nor'Easter as crews get to work on piece-by-piece repairs to the 2,100-foot ride.

Known today officially as "Fly" — but still colloquially considered the Great Nor'Easter — the 21-year-old coaster is under refurbishment because it's become a bit too bumpy of a ride, a safety official for Morey's told the Press of Atlantic City.

Late last month, Morey's Pier posted a photo of the 250-ton capacity crane that will be used to dismantle and outfit the steel inverted coaster with new parts. The overhaul will replace 90 percent of the track with state-of-the-art bending technology manufactured in the Netherlands by Vekoma, the company that built the roller coaster in 1995.

Year-round residents near the popular summer attraction should accustom themselves to a steady stream of distant clinks and clanks in what is expected to be a noisy operation.

Original costs for The Great Nor'Easter reached $5.5 million, an amount almost equivalent to the $5 million pricetag of the current repairs. In 2008, a $1.2 million upgrade equipped the ride with ergonomically designed "Freedom Seats" that provide passengers a more snug experience.

All repairs are expected to be finished by the summer of 2017.