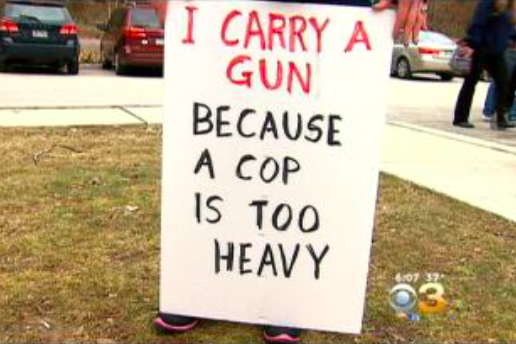 Gun rights advocates carried signs and, in some cases, their firearms, to Bala Cynwyd Park this past Sunday to protest a Lower Merion Township law they say violates state law and their rights.
The protest was just the latest twist in an ongoing dispute between gun groups and Lower Merion over the wording of a township ordinance: "No person, except authorized members of the Police Department, shall carry or discharge firearms of any kind in a park without a special permit, unless exempted.”
"We are gathering here today to exercise our First and Second Amendment rights as we boldly express our dissatisfaction with Lower Merion Township refusing to obey state law," Steve Piotrowski, founder of a grassroots organization called Citizens for Liberty, said at the Sunday rally. "No county, no municipality or township may regulate the unlawful ownership of firearms and Lower Merion is clearly breaking the law."
Under Pennsylvania law, no city, township or county can enforce gun laws that are more restrictive than the state's. Gun groups have threatened to sue the township.
But Lower Merion officials say the township law is within the limits imposed by the Commonwealth, pointing to the "unless exempted" clause of the ordinance.
Main Line residents appear to be standing behind the township, telling the board of commissioners not to bow to pressure from gun advocates. Commissioners in January voted 11 to 3 not to change the ordinance after receiving a letter from a law firm representing firearm interests threatening a lawsuit.
You can catch a video of the rally below.