It initially will provide mammograms, but eventually will be used to detect prostate, head and neck cancers too 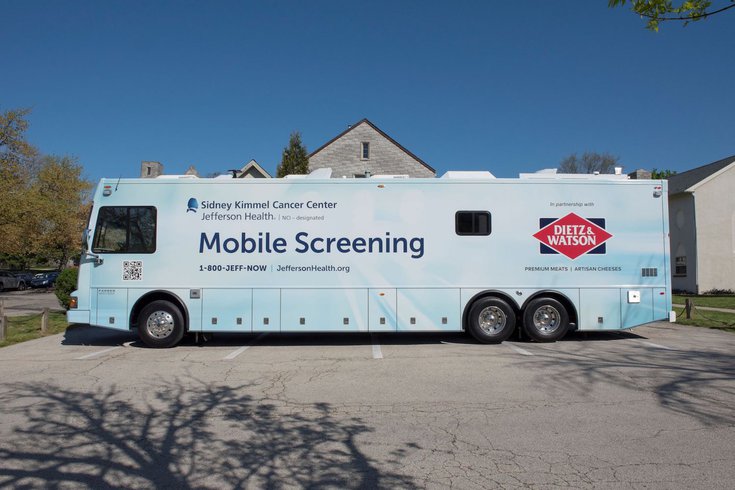 An estimated 608,570 U.S. residents will die of cancer this year, according to the American Cancer Society. And Philadelphia has the highest cancer rate among the country's 10 biggest cities.

Five-year survival rates are significantly higher when cancers are diagnosed in earlier stages, data shows. However, there remain many challenges to ensuring that everyone recommended for a screening gets one.

Lack of access is one of the most common barriers to recommended cancer screenings. Work and family obligations as well as transportation challenges make it difficult for some patients to follow screening guidelines.

To help remove those barriers, Jefferson Health's Sidney Kimmel Cancer Center has launched a mobile cancer screening unit that will travel throughout the Philadelphia region to areas where health care is not easily accessible. It initially will provide mammograms for breast cancer screening. But it eventually will screen for prostate and head and neck cancers, plus melanomas.

"About 25% of households in Philadelphia don't have their own transportation for health care appointments," Jefferson Health President Dr. Bruce Meyer said. "By going directly to our neighbors who need help, we will increase rates of early detection throughout the city."

The mobile unit, funded by a $1.4 million gift from Dietz and Watson, has the capacity to screen 16 patients a day, or eight patients on a half-day. In addition to traveling to neighborhoods, it will provide screenings at anchor sites of the Philadelphia Collaborative for Health Equality.

The mobile unit is part of the Sidney Kimmel's efforts to break down as many screening barriers as possible, Dr. Amy Leader, director of community and engagement, told PhillyVoice. In addition to combatting scheduling logistics, the center seeks to address barriers of language, cost and trust through its longstanding community partnerships.

The unit is outfitted with state-of-art mammography technology and provides access to Jefferson's electronic health records to ensure continuity of care. It is also wheelchair accessible.

Patients who do not have health insurance or cannot afford the cost of a mammogram can get one for free, Leader added.

Though this is the first mobile unit at Sidney Kimmel, it is the second one in Philadelphia. Fox Chase Cancer Center has had one for years, Leader said.

Fox Chase advised Sidney Kimmel on the best way to implement its mobile unit and how to utilize two similar resources throughout the region, Leader added.

The Sidney Kimmel Cancer Center serves about 5 million residents in Philadelphia, Montgomery and Bucks counties in Pennsylvania and Camden, Burlington and Gloucester counties in New Jersey.

People can visit the Sidney Kimmel Cancer Centerwebsiteto learn when the mobile unit may be visiting a nearby location.