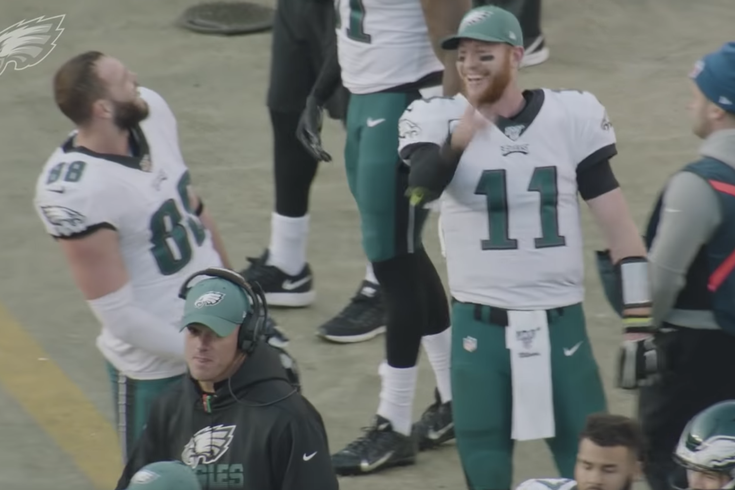 Eagles quarterback Carson Wentz has piloted two straight game-winning drives in his team's last two games, a very good sign for the face of the franchise after a rocky year-plus since returning from his 2017 ACL injury. The most recent victory, a comeback win over Washington on Dec. 15, saw Wentz go 8-for-8 for 70 yards and a touchdown in what was possibly his most impressive clutch drive of his career.

Luckily for Eagles fans, Wentz was mic'd up during the game, and the team released a six-minute video of Wentz talking, shouting and cheering his way through the crucial late-season victory.

• Wentz taking ownership of his fourth quarter fumble, including telling defensive players "that's on me" after they stopped Washington on the ensuing possession

• Wentz endlessly praising Miles Sanders, after his laser touchdown pass to the rookie running back

• Wentz's still-impressive refusal to swear, including his calling Greg Ward a "son of a gun" after the game-winning touchdown, just as he did with Jake Elliott's 61-yard field goal in 2017

Wentz has proven time and again to be a relatively bland interview, as franchise players often intentionally are. Luckily, it seems he's much more electric on the field. The entire video is very much worth your time:

Wentz, 26, has thrown 25 touchdowns to seven interceptions this season, has completed 63.4% of his passes, and is averaging 6.5 yards per attempt.

In Week 16, he faces possibly the biggest game of his career to this point, a home showdown against the Dallas Cowboys with no room for error: A win puts the Eagles in the driver's seat for a playoff spot, but a loss ends their postseason hopes.

The Eagles and Cowboys face off Sunday, Dec. 22, at 4:25 p.m. at Lincoln Financial Field in South Philly. It should be quite a scene.