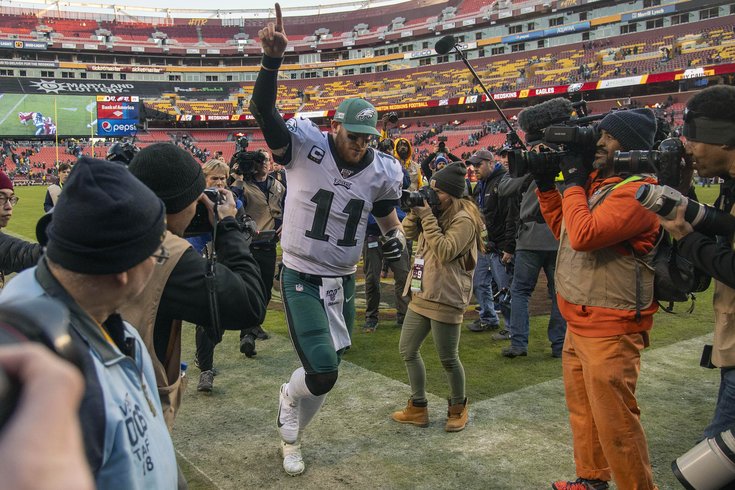 While they rarely ever make it look easy, the Philadelphia Eagles got in the win column for the second straight week over an NFC East rival on the strength of late-game heroics.

A week ago against the Giants, Wentz led a game-tying drive at the end of regulation, and then a game-winning drive in overtime. In Washington, facing a three-point deficit with a little under five minutes to go, Wentz led an 11-play, 75-yard drive in which he was 8-for-8 for 70 yards, leaving just 26 seconds on the clock. He has been masterful when the Eagles have needed him the most, and he has put the Eagles in a position to win the NFC East.

I'd love to know how many miles per hour the following throw would have been on the radar gun. But also, beyond the power behind this throw, the placement was absolutely perfect.

If there's some nerd out there who can figure out the miles per hour, given the distance of the throw and the timed speed with which the ball got there, please let me know. Thank you in advance.

What is crazy about this throw, however, is that Wentz tried to move defenders with his eyes before letting this rip. Look at his turn his head to the left before the throw.

Wentz is an incredibly talented quarterback.

Of course, as talented as Wentz is, he has flaws, the biggest of which at the moment is his penchant for fumbling. His first fumble was on a play in which he was wrapped up, and didn't have any sort of realistic chance of making a play, but he tried to throw and the defender knocked the ball out.

His second fumble came on a play in which his internal clock must have shut off, and he was holding the ball down low with one hand where it was easy to strip.

Third down and short, Wentz stands in the pocket and fumbles. It’s his seventh loss fumble of the season. pic.twitter.com/7b9xLI9RYj

Wentz didn't have a single fumble in the first six games of the season. In the last 8 games, he has fumbled 13 times, and has lost 6 of them. He's gotta clean that up. It's a major problem at this point.

Miles Sanders made a 56 yard run out of what would have been a 3-5 yard loss for an average RB!

Doug Pederson called a draw on the play that was designed to go up the middle. Wentz had a "kill" option to check to a pass if Washington packed the box, but the Eagles liked their numbers and kept the run call on. There was nothing in the middle of the field, so Sanders deftly slid to the left and turned on the jets. He's going to be a really good player.

While Wentz had his second big-boy comeback in as many weeks, and Sanders had the biggest impact of any Eagle on Sunday, the guess here is that in 10 years we'll remember this as "The Greg Ward game."

With the Eagles forced to bring guys up from the practice squad due to the losses of DeSean Jackson, Alshon Jeffery and Nelson Agholor, Ward has played with excellent energy, and has stepped up when the Eagles have really needed someone to make plays.

Ward had 7 catches for 61 yards on the day. On the final drive, he had 4 catches for 40 yards, all of which either went for first downs, or the touchdown.

6) The 'Owned By a Bad Rookie (and Depleted OL)' Award: The Eagles' defensive line

In 7 games (5 starts) heading into this game, Washington starting quarterback Dwayne Haskins had thrown 7 INTs and had fumbled 5 times, though he was fortunate to only lose 1. He had been sacked 26 times on only 160 pass attempts, and he had a passer rating of 61.2.

On Sunday, the Eagles did not sack Haskins once, despite Washington's best offensive lineman, Brandon Scherff, sitting out with an injury. Haskins had plenty of time to throw, and he was 19 of 27 for 261 yards, 2 TDs and 0 INTs for a QB rating of 121.3.

7) The 'Owned By a Good Rookie' Award: The Eagles' secondary

The Eagles' secondary had one job heading into this matchup — don't get beaten for a big play by No. 17, Terry McLaurin. And then, predictably, they did...

Next week, the Eagles are going to have to deal with a hell of a lot more than McLaurin when the Cowboys come to town.

8) The 'Home Away From Home' Award: Eagles fans

Last year, with the Eagles needing a Week 17 win in Landover and a Vikings loss to the Bears to sneak into the playoffs, Eagles fans made the short drive down I-95 and flooded FedEx Field, creating a home game atmosphere. It was more of the same on Sunday.

This Eagles season has been a disappointment, to say the least, but credit the fans for making the trip and staying invested.

The final score was 37-27, but we all know it was a closer game than that. I hope you didn't have Washington +4.5. If so, this is what nightmares are made of:

LAST PLAY OF THE GAME, #Eagles SACK HASKINS, FORCE THE FUMBLE, AND NIGEL BRADHAM RUNS IT ALL THE WAY BACK!

OK, so it's not really a true "NFC East Championship Game." At the time of this writing, the Cowboys are up 34-7 over the Rams, and very much in control of that game. Should they hang on for the win, the Eagles and Cowboys will once again be tied atop the division.

If the Eagles beat the Cowboys, they will either need to beat the Giants in New Jersey the following week, or have the Cowboys lose at home to Washington.

Anyway, "NFC East Championship Game" or not, it's going to be kind of a big game.