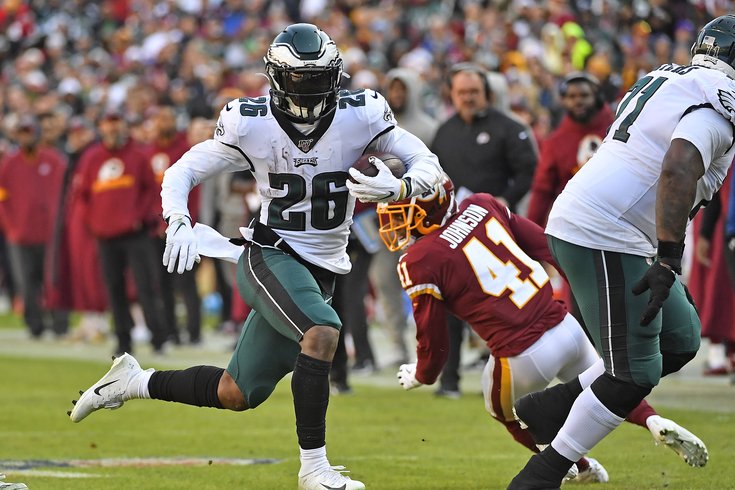 Miles Sanders had a huge game Sunday vs. Washington.

The 2019 Eagles don't exactly look like the kind of team to lead the league in many stat categories.

They're about as mediocre as a team can be in the NFL and still, technically be contenders (they can continue their inside track to an NFC East title next week vs. Dallas).

However, they have adapted and turned themselves into the league's second leader in time of possession.

It's an offensive adjustment made out of necessity.

First, their personnel more or less demands it. Sunday in their 37-27 win over the Redskins, the Eagles fielded J.J. Arcega-Whiteside, Greg Ward and Robert Davis at wide receiver while Boston Scott got 13 touches as the backup RB. This is not the group of skill position players the Eagles expected to have this season.

Because of this, they lack the kind of vertical threats that would produce big plays. According to sharpfootballstats.com, the Eagles have created "explosive plays" in just nine percent of their snaps — tied for 20th in the NFL. An explosive play is a 10+ yard run or 15+ yard pass, of which the Eagles have 36 runs and 36 passes that qualify. For some context, the Ravens (73) lead the NFL in explosive runs and Rams (59) in passes.

Philly is slow and steady on offense, possessing the ball for 32:19 per game — or 53.9 percent of the time.

On Sunday they had the ball a dominating 36:57. The offense also holds on to the ball, well, out of necessity.

#Eagles defense entered this weekend's games with a fourth-worst-in-the-NFL 13 pass plays of 40-plus yards allowed. That Terry McLaurin 75-yard TD makes it 14.

It seems like every week there is an opposing wide receiver burning the Eagles secondary. Two weeks ago it was Miami's DaVante Parker. Last week it was Darius Slayton. In Week 15, just as it was in their Week 1 matchup, it was Terry McLaurin.

Lacking the ability to respond to the quick strike, Philly instead tries to grind down the opposing defense, as they did four times Sunday in a game that the Eagles literally won thanks to getting and keeping the football when it was most important to do so.

Getting the ball down by a field goal, the Eagles had the chance to not only drive down the field to take the lead but also to drain the clock — which they did, using 11 plays and 4:48 of game clock to go up by four and all but clinch a second straight comeback win.

Drives of 16-plays, 10-plays and 12-plays led to the Eagles' first three scoring drives (and for good measure, a fourth quarter touchdown on an 8-play march). The fifth, of course, took 11 plays and resulted in the go ahead TD toss on a rainbow throw from Wentz to Ward.

With Alshon Jeffery done for the year, DeSean Jackson out until at least mid January and the odyssey of Jordan Howard's shoulder injury seemingly endless, there's a pretty good chance the Eagles will have to make due with their current roster of skill players to make a postseason run.