The Eagles are so frustratingly inconsistent, they're not even average 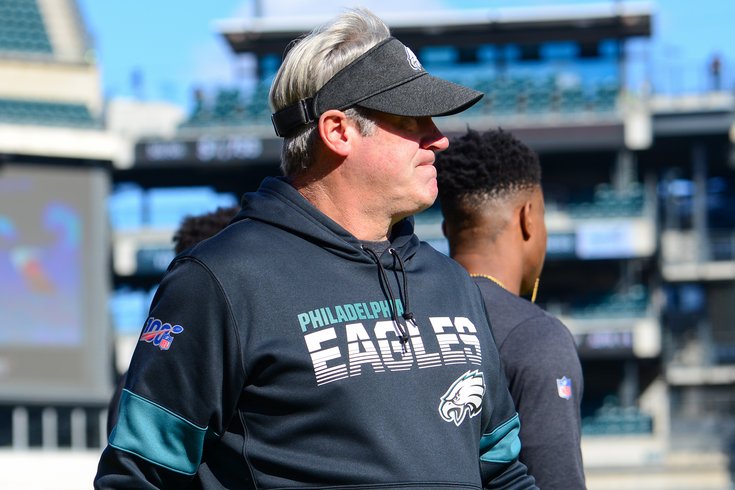 A win over the Giants hardly means Doug Pederson and the Eagles have figured this thing out.

There's inconsistency, and then there's the 2019 Philadelphia Eagles.

From Carson Wentz to the wide receivers to the secondary and onward, the Eagles are just painfully unreliable to watch. The Birds are undeniably statistically average, but with enough variance to make it impossible to make sense of a lot of what they put on the field week after week.

Every NFL team has a few bad drives in a row, or even a bad game from time to time, but for a team expected to seriously contend, the Eagles have more than their fair share of stinkers.

And then after 40 minutes of misery, they march down the field to score 20 unanswered points in just about 25 minutes to complete one of the more unusual comebacks in Eagles history.

“It wasn’t the first time that we’ve had to make a ton of adjustments on the sideline," Zach Ertz, who caught two touchdown passes said. "Guys are just battle tested right now at this point of the year. We’re not going to flinch. Obviously we’ve dealt with a ton of adversity this year and we just have to find a way to win.

Philly is 6-7 and, considering the adversity they've faced, it's somewhat understandable why. But the way they got to that record is pretty weird. There is no predicability about performance.

The most puzzling part is that the team isn't particularly terrible at any one particular thing.

We could add more to the table but you pretty much get the idea. The Eagles have played 13 games and have played really really badly (remember the Vikings game?), really really well (against the Bills, Bears and Packers), and everything in between.

If they played average football against below-average opponents — like the Giants and Dolphins — they'd be able to claim the mundane title of NFC East champs, no problem.

Except they play up to their good opponents, going toe-to-toe with upper echelon teams like the Patriots and Seahawks, two recent games they lost by one possession after incredible (though sometimes lucky) defensive efforts.

Monday night's 23-17 overtime victory over the two-win Giants showcased everything that has been frustrating Eagles fans this season in a microcosm. Hundreds, maybe thousands of fans left before the comeback and it's almost excusable considering what had been on the field for nearly 40 worthless minutes.

However, after close observation, we have pinpointed five things that have been consistent through pretty much every Eagles game this season. Here are five frustrating trends the Eagles just can't seem to break:

Lane Johnson and Alshon Jeffery didn't make it through the first half Monday — and could be out for the foreseeable future — joining a really, really long list of costly setbacks on the health front for the Eagles this season. Jalen Mills, J.J. Arcega-Whiteside and Miles Sanders also headed to the infirmary before the end of the game, but all three are expected to be fine.

We'll spare you a detailed breakdown of the injury woes, Matt Mullin already did that, but we will point out that this is (ridiculously) not the only time this season the Eagles have limped to the finish line with a group of skill players who typically take reps with the 3's. In their Week 2 loss to the Falcons they were similarly down weapons left and right (though they didn't lack the depth of the Week 14 team).

And that brings us to Doug Pederson, who made a bevy of questionable decisions in the Birds' most recent win, most notably dressing just three wide receivers for the game. After losing Jeffery and Arcega-Whiteside, Wentz was left throwing to Greg Ward and Josh Perkins in overtime as Ward was the team's only healthy wide receiver left late in the game.

Pederson also faked going for it on fourth down before deciding to punt in the first half, and then gifted the Giants a time out on their final possession of the half, leading to an 84-yard New York touchdown drive. He challenged a pass interference call in the second half that was borderline at best.

With so many pass-catchers hurt (and the rain falling), you'd think Pederson would have leaned a bit on the run game, but Wentz threw a season high 50 passes in the win. It wound up working out this time, but it was the first time the Eagles have won this season (1-5) when throwing 40 passes or more. Pederson may not be the biggest problem this season, but he's been far from good.

Pin these grievances on Pederson if you like, but having Perkins on the field for a key third down (instead of Dallas Goedert — before the injuries mounted), or Boston Scott have the first carry of the game (before he broke through in the second half) are just, well peculiar. This continues a trend we've seen all season.

Back before Darren Sproles saw his season end, the veteran was taking touches away from Jordan Howard and Sanders and wasting them.

In direct correlation to the above complaint about the Eagles passing too much, Pederson has not had a lot to work with, and it's effected his play-calling to be sure.

If you watched Darius Slayton play for the first time Monday night, you'd think he was at worst a Rookie of the Year candidate, and at best a future Hall of Famer. Add him to the list of receivers that decimated Philly's secondary. Here's a table that better illustrates this issue:

Yeah, the secondary kind of got its act together in the middle of the season, but what does that matter now? Eagles fans can pretty much count on being disappointed by Jalen Mills, Ronald Darby or Rasul Douglas at least once per game.

Who is the real Wentz?

And finally, the regression of Carson Wentz seemed like it was destined to continue Monday night, as the quarterback reverted away from the proficient leader in the huddle who threw for 310 yards and three touchdowns in the Dolphins loss into the one who couldn't get anything going in winnable games against the Seahawks and Patriots, fumbling for the 42nd time in his career in the first half as the team trailed by two touchdowns.

Wentz has as many 300+ yard passing games as he has 200-yards or less this season (four apiece). There is a lot of blame to go around for some of those bad performances, as drops and injuries have decimated the offense. Still, it was nice to see him find a way to lead a group of second- and third- stringers to victory in Week 14.

"It’s big for me and for all of these guys," Wentz said of the comeback. "You know, the emotional rollercoaster of the day and obviously realizing how poor we were in the first half and just how it spring-boarded us into the second half. We just made plays and kept making plays. Winning late in overtime like this, it’s been a while. Shoot, I don’t think I’ve had an overtime win. That was just a lot of fun.”