After the first half of the Philadelphia Eagles' Monday night matchup against the New York Giants, the Birds looked like they were dead, as the offense was lifeless, and their body language was lethargic. In the second half, the Eagles were able to get the offense going a bit, the defense clamped down, and they turned in one of the more entertaining-but-bad wins in recent memory.

On the night, Wentz was 33 of 50 for 325 yards, 2 TDs, and no INTs, while throwing to guys like Boston Scott, Josh Perkins, and Greg Ward (we'll get to them momentarily). He led a late-game, 14-play, 85-yard TD drive that ate up 6 minutes and 17 seconds, and in overtime, the Giants never got the ball as Wentz led another 8-play, 75-yard TD drive for the win.

It wasn't always pretty, especially in the first half, but Wentz carried the team on his back with the season on the line. He was clutch when the Eagles needed him most.

Scott, Ward, and Perkins were all on the practice squad at various points this season, and were unlikely heroes in a late-season game.

It just goes to show how bad the receivers have been this season when fans are (rightfully) all geeked up over a receiver making 4 catches for 34 yards. But they made the plays they should have made, which connot always be said of the starters.

(I still contend that Antoine Bethea got a fingernail on the throw to Ward in the end zone, which is TBD on the re-watch).

3) The 'Bounce Back' Award: Zach Ertz

Ertz had perhaps the second-worst game of his career a week ago in Miami, when he was unable to make a trio of plays that he usually makes, but he bounced back in a big way against the Giants, catching 9 balls for 91 yards and 2 TDs. Ertz now has a 5-game TD streak against the Giants.

4) The 'Bounce Back, Part II' Award: The Eagles' defense

The Eagles' first half defense could be summed up like this, as rookie Darius Slayton had 5 catches for 154 yards and 2 TDs: 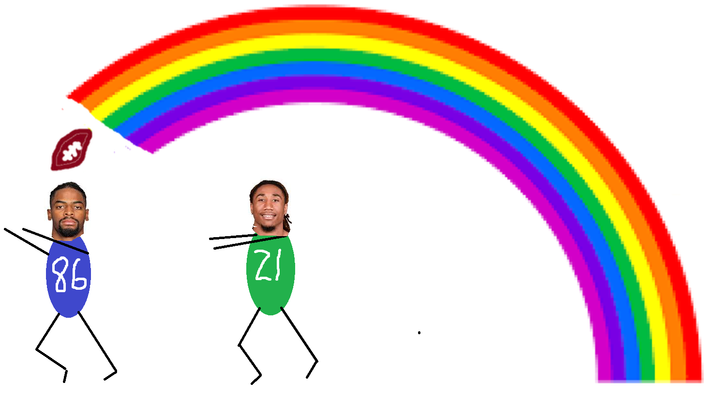 The Eagles were once again getting torched, a week after one of their worst performances of the season in Miami.

In the second half, however, the Eagles' defense completely shut down the Giants, allowing a grand total of 29 yards.

5) The 'OH NO, They Really Need Him' Award Lane Johnson

Lane Johnson goes down with a scary knee injury ... prayers up 🙏 pic.twitter.com/IxQM2PwSpY

Johnson was able to get up and walk off the field with a heavy limp, before eventually being carted away.

We'll see how long Johnson will be out, but for now it looks like he avoided a much more serious injury:

I’m told that after x-rays no break in Lane Johnson ankle...its a high ankle sprain...

The Eagles need Johnson against DeMarcus Lawrence and the Cowboys Week 16. Hell, they need him Week 15 against Washington's Ryan Kerrigan.

6) The 'OH NO, They Need To Be Able To Trade Him' Award: Alshon Jeffery

Jeffery may not have been as lucky as Johnson.

#Eagles WR Alshon Jeffery will have an MRI in the morning. Source says Jeffery felt something pop, which isn’t ideal. Doesn’t sound like it’s an Achilles. We’ll see what’s up in the AM.

Even prior to the injury, it was looking a whole lot like Jeffery was going to be let go this offseason whether that be via trade or release. If the Eagles were able to trade him, for literally anything, the cap hit wouldn't be as bad as if they were to release him.

If Jeffery's injury is as serious as feared, any hope of trading him is gone.

7) The 'Sweet Roster Management (More Specifically, HOW THE HELL DO YOU GO INTO A GAME WITH 3 WIDE RECEIVERS?!?)' Award: The Eagles' organization as a whole

When it was learned that Nelson Agholor would be inactive for this game, that left the Eagles with 3 wide receivers. Before the game, if I may congratulate myself for a moment here, I pointed out the math behind this decision.

The Eagles would be wise to never go into a game with 3 receivers ever again. I mean, they have 3 receivers currently on the practice squad! What's the point of having them there if you're not going to use them when you need them?

The Eagles had two scoring drives of 10-plus plays, bringing their 10-plus scoring play drive total to 17 on the season.

It is impressive that Wentz has been able to consistently engineer these drives when there is no threat at all of a WR doing damage down the field, but it's an unsustainable way of conducting offense in the modern NFL.

9) The 'Tiebreaker' Award: The Giants

Two ties were broken in this game:

The Eagles will play in Washington next Sunday, but a Week 16 date with the Cowboys looms on the horizon.