Should the Eagles trade for Odell Beckham Jr. this offseason? 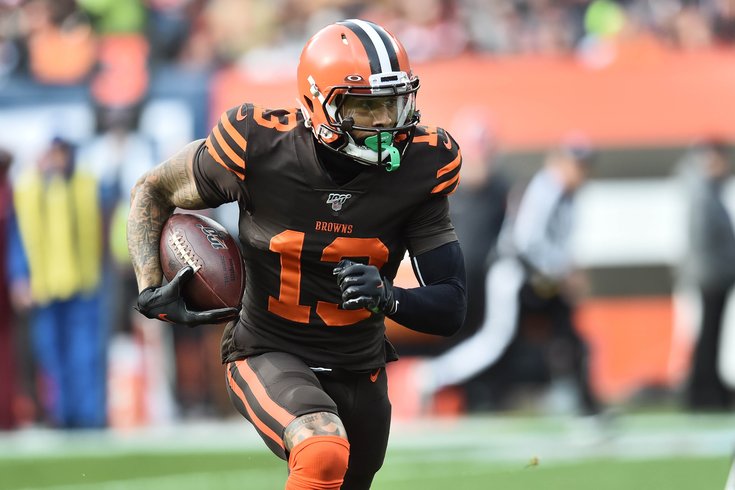 For those of you who missed the latest in the Odell Beckham saga, he now wants out of Cleveland, per Jay Glazer of FOX Sports, who, as he'll remind you in the following video, was the first notable reporter to sniff out Beckham's departure from the Giants the last time Beckham was unhappy.

Does Odell Beckham Jr. really want out of Cleveland? @JayGlazer has the latest: pic.twitter.com/5XEDYj6Iba

Let's evaluate the pros and cons:

• Beckham (now 27) is extremely talented, and when healthy, has top 3-5 WR potential, and oh hey, the Eagles' badly need a receiver who can make plays for Carson Wentz.

The Dallas Cowboys are a great example of what a quarterback can look like with a stud receiver. When Amari Cooper was healthy earlier this season, Dak Prescott was playing well enough that some had him in the conversation for MVP. When Cooper's play fell off after he sustained some injuries that he's still trying to play through, Prescott has looked average.

On paper, adding Beckham to the Eagles' offense would give Wentz a star talent to throw to, who would also open up opportunities for the other players on the field. Duh. That's the obvious part.

• He's relatively cheap. If you trade for Beckham, because the Giants already paid him a sizable chunk of his contract through signing bonuses and such, you're getting him at the following cap numbers through 2023 (via OverTheCap):

Those numbers could soon look like chump change, and Beckham is scheduled to become a free agent in 2024. Of course, at some point, if he's performing, he's going to want more money.

• The 2020 WR free agent class is not very compelling. A list of soon-to-be wide receiver free agents, sorted by yardage totals in 2019 (not including Sunday's games):

Ew. Assuming the Cowboys do whatever they need to do to keep Cooper, and the Dolphins make the easy decision to keep Parker on a $5 million team option, all you've got left is a bunch guys on the wrong side of 30, Robby Anderson, and Nelson Agholor. Again, ew. The Eagles aren't solving their problems in free agency.

• Durability: A list of Beckham's prior injuries, via SportsInjuryPredictor.com:

Currently, Beckham is playing through a sports hernia injury that requires surgery.

Remember when the Eagles traded for DeSean Jackson, but did not plan in advance for the likelihood that he would miss games, and he missed almost the entire season? Good times. Well, given Beckham's career trajectory, you have to assume he is going to get hurt at some point in most seasons.

• Is he going to want out of Philly in a year? As Glazer points out, Beckham did not choose to go to Cleveland, since he was traded there. If he's traded to Philly, isn't that kind of the same thing? And even if he is happy initially, like he was with the Giants, who's to say that he won't change his mind?

But asking to be traded isn't even the alarming part. Glazer's reporting that Beckham is telling opposing players and staff to get him out of Cleveland before and during games is next-level selfishness.

• The 2020 draft class is going to be absolutely loaded with wide receiver talent. The Eagles are currently projected to have 10 draft picks, seven of which will likely be the first four rounds.

As always, what's the cost? Is (Browns GM) John Dorsey going to hold out for a first-round pick? If so, with that pick, I'd rather select a healthy 21-year-old receiver who costs around $4 million/year who I know isn't going to demand a trade in a year.

If the cost is cheaper, then sure, let's have that discussion.