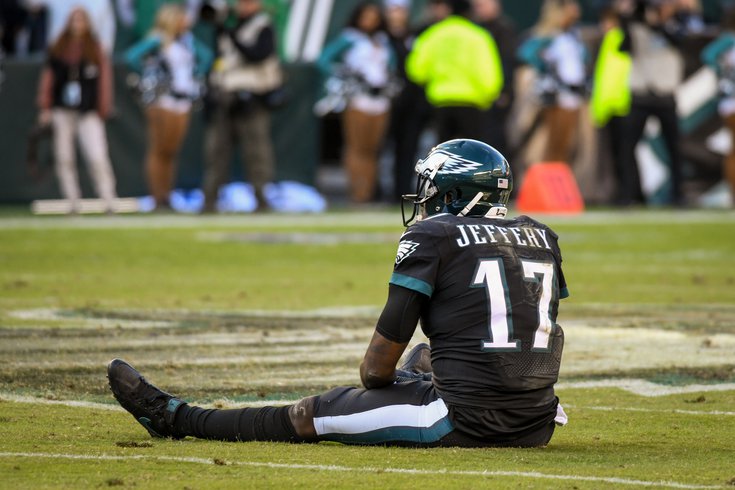 UPDATE [3:57 p.m.] — According to a report from NFL Network's Mike Garafolo, Alshon Jeffery's 2019 season is over after suffering a foot injury in Monday night's win over the Giants. The specifics of the injury are not yet none, per Garafolo, but it's serious enough for them to already decide that his season is over.

Not exactly a surprise but source with knowledge of #Eagles WR Alshon Jeffery’s injury status says his season is over. They’re still gathering opinions about what exactly is wrong with his foot but he’s done for the year.

Pederson wouldn't reveal the nature of his injury during his Tuesday afternoon press conference, only saying that it was "significant" and that the team was still awaiting the results of one more test. It will be interesting to see what the diagnosis is, given that the injury occurred in a non-contact situation, and whether or not it will linger into next year's offseason program (or beyond).

The Eagles may have been able to pull off a huge come-from-behind win over the Giants in overtime on Monday night, but they didn't do so without some casualties, as the already injury-plagued Birds saw several starters leave the game with injuries.

On Tuesday morning, head coach Doug Pederson provided medical updates on several key Eagles, including Lane Johnson and Alshon Jeffery, both of whom were carted to the locker room during the 23-17 win at the Linc and didn't return to action. Here's a look at what Pederson had to say and what it means moving forward.

Let's start with the worst news, even though the full extent of his injury in not yet known. Pederson said that his No. 1 wideout suffered "a significant injury" in the win and was eerily evasive when asked for more info.

With just three games left in the year, that could spell the end of Jeffery's season, who has battled through injuries throughout the season. But Pederson again wouldn't give any more information until he gets those test results this afternoon.

"I'm going to wait to comment on that — it's significant — until I get this last test result this afternoon," Pederson said.

It didn't look good for Jeffery right from the start, as the injury occurred on a non-contact play as he was coming off the snap.

That's scary enough on its own, but add to that the fact that Jeffery "felt something pop" in his ankle/foot area, and this could indeed be a significant injury.

#Eagles WR Alshon Jeffery will have an MRI in the morning. Source says Jeffery felt something pop, which isn’t ideal. Doesn’t sound like it’s an Achilles. We’ll see what’s up in the AM.

It certainly feels like Jeffery's season could be over — and that would be a huge blow to the Eagles — but we'll wait to see what comes of those other test results. Pederson also added that this was a new injury and not related to any of Jeffery's previous injuries this year.

Stay tuned on this one...

We'll get back to the Eagles bleak wide receiver situation in a minute, but this is arguably the biggest injury suffered by an Eagles player this week as we already saw the offensive line try to function without Johnson anchoring the right side earlier this season when he was out with a concussion.

According to Pederson, Johnson is "week to week" with an ankle injury, which all but guarantees he won't play against Washington and puts his chances to play against the Cowboys the following week in serious jeopardy.

The injury to Johnson occurred when Carson Wentz was sacked and in the second half of Monday night's win.

The Eagles finished the game with Halapoulivaati Vaitai in place of Johnson at right tackle, and at least against the Giants, that was enough to get the job done. It also appears like that will be the plan moving forward.

"Yeah, just like we came out of the game yesterday with Big V getting work there," Pederson said when asked about replacing Johnson moving forward. "Obviously Andre [Dillard] can cross train both sides, Matt Pryor is available, so we've got options there."

Speaking of Dillard, while Johnson was out with his concussion, the Eagles originally moved the rookie left tackle over to the right side, but after he struggled mightily, they opted for Big V instead. After that, Jason Peters said he'd be willing to move to the right side to allow Dillard to play his natural position, one at which he's faired pretty well this season. Pederson, however, doesn't foresee that being the plan against Washington.

"We'll look at everything, obviously," Pederson said. "I thought that Big V did a nice job in the game yesterday, he and Brandon [Brooks] side by side. So right now we would kind of consider keeping the status quo there."

Agholor (knee) didn't play last night as the Eagles only dressed three wideouts, a number which was down to one by the time the game ended with Jeffery and rookie J.J. Arcega-Whiteside (more on him in a minute) leaving with injuries. And Pederson didn't seem too confident that he'd be ready for Sunday's game in Washington.

"That one is still up in the air," Pederson said. "We just have to keep working through his injury and where he's at. We've got to continue to have conversations with him and see where he is prior to this week."

That means the Eagles could once again be rolling with another new wideout next week. Whether that comes from inside the organization or outside it remains to be seen. But Pederson is keeping his options open.

"We've definitely got a couple guys on the practice squad if we need to make a move," he said. "Obviously, as you know, we could look outside the building if we need to, but we're going to work through that today and try to get something in place here pretty quick because we're back on the field tomorrow."

But the options, both internally and externally, aren't great at this point.

Doug said Nelly's status still unknown for Sunday so you would think they would add a WR or two. Or three. Robert Johnson, Marken Michel and Marcus Green all on practice squad.

And Eagles are about due to bring back Jordan Matthews too.

Finally, some good news for the Eagles, as Pederson said both Sanders and Arcega-Whiteside are fine after both left last night's game with injuries, although Sanders would return before the end.

The Eagles finger-wagging cornerback left the game with an elbow injury, but Pederson said on Tuesday that he'd likely be fine for this week's game, although he would be wearing a brace.

"Jalen Mills should be OK. He'll be day to day," Pederson said. "The only thing you'll see probably is a brace on his elbow, but other than that he's good."

No word yet on how that brace impacts his ability to wag his finger in wide receivers' faces.