Carson Wentz is putting together a highlight reel season, with gifs and stuff 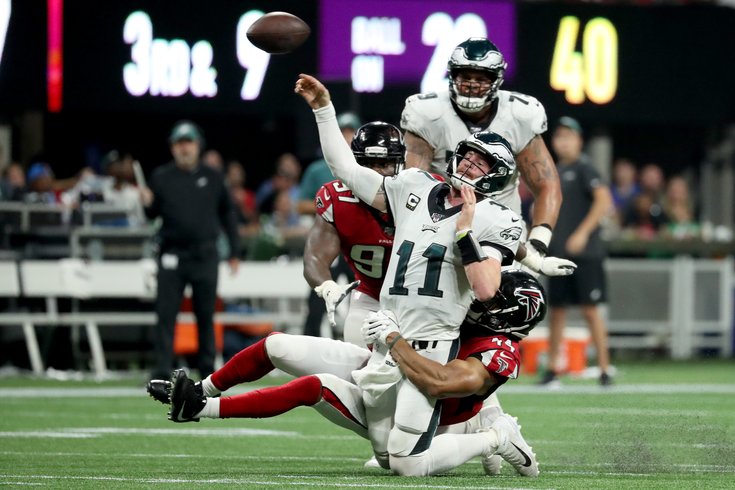 This was an OK play, I guess.

In 2017, before he got hurt, with each new game, Carson Wentz had another absurd highlight reel play to add to the pile. In 2018, while solid, he didn't quite have the same flair for the impossible, as he was still recovering from his torn-up knee.

In 2019, through five games, Wentz is once again making plays that only a handful of NFL quarterbacks are capable of making. Let's show some, in chronological order:

Wentz launches this 60 yards in the air with ease, on the money to Jackson for a TD. He and Jackson connected Week 1 on two 50-plus yard bombs, with this one being the more impressive of the two.

Wentz escapes the pocket, throws into a tight window while on the run for a TD to Alshon Jeffery

On the regular sideline angle, this play looks nice, but it doesn't do it justice.

From the rear angle, look at the window he's throwing into here, knowing that the momentum of the linebacker (55) is taking him to the left, as he sneaks it past him to the right. Incredible throw.

Wentz, falling down and throwing with a guy draped all over him, hits Mack Hollins in stride

...but not before also avoiding two rushers:

Wentz got little to no protection in this game from his offensive line (notably, Isaac Seumalo), but he kept standing in the pocket and making throws under heavy pressure. This was a dime that should have been a TD.

Wentz finds Agholor behind the defense on a 50-yard bomb

Off his back foot!

This is all arm. Oh, and he also got blasted during his follow-through.

Again, Wentz's arm strength was on full display on the game-ending drop by J.J. Arcega-Whiteside

It blows my mind that anyone could possibly criticize Wentz for this throw, on the premise that he should have led Arcega-Whiteside more. Led him more? Lol. This isn't some 15-yard crossing route. Wentz is moving in the pocket to his left, and without the benefit of being able to step into this throw (to his right) and a defensive end pawing at his wrist, he launches it more than 55 yards in the air and hits Arcega-Whiteside in the hands.

And finally, against the Jets on Sunday, he ducks under a Quinnen Williams sack, and hits Zach Ertz in stride 20 yards down the field.