Commercial kitchen will turn out 1,500 meals per day 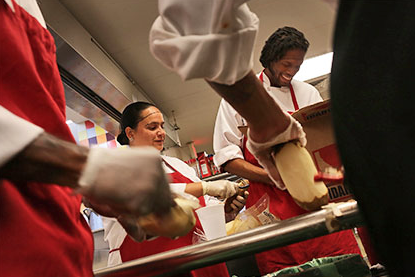 On April 17, Cathedral Kitchen celebrated the completion of its CK Café expansion.

In 1976, four young Camden residents were so inspired by a session with Mother Teresa that they decided to organize act boldly with their charitable spirit.

Over nearly four decades, Cathedral Kitchen has built on its mission to help the hungry in Camden and has evolved into a center for education, health services, volunteerism and even catering.

As an on-site meal program and provider for local shelters, after school programs, pantries, and churches, Cathedral Kitchen now serves over 200,000 meals per year to Camden residents in need.

This past week, the nonprofit organization launched the next phase in its growth with the inauguration of CK Café next door to Cathedral Kitchen, NJ.com reports.

The 5,900-square-foot building will not only be the home of the CK Café, but will also house a commercial kitchen that turns out approximately 1,500 meals every day for seven half-way houses and homeless shelters in the surrounding area, a new Baking Arts Training program, and a roof-top garden to provide herbs and other vegetables for the kitchen.

On April 17, a grand opening and ribbon cutting ceremony was held at the new facility, hosted by Kitchen Cathedral board member and former NBC 10 reporter Terry Ruggles.

Nine of the 16 new employees on a staff of 35 were trained in Cathedral Kitchen's own culinary arts program, Ruggles said at the event.

Renovations to the building next door to 1514 Federal Street were greatly helped by the nearly $2 million raised by a rehab project and capital campaign called "Serving Up Hope in Camden."

CK Café will officially be open to the public in May, while the Baking Arts Training program will start its first class in August.

For more information and to learn about volunteer opportunities, visit www.CathedralKitchen.org