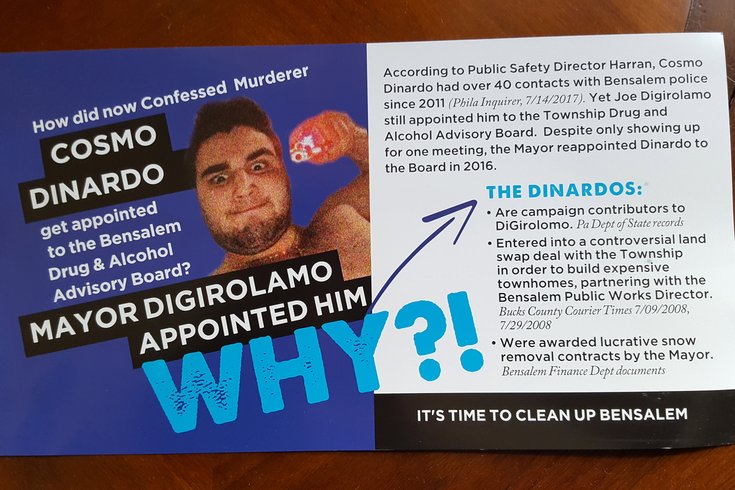 Bryan Allen, a Democrat running for mayor in Bensalem Township, included a jarring image of Cosmo DiNardo on a campaign mailer tying incumbent Mayor Joe DiGirolamo to the confessed killer.

A mayoral candidate in Bucks County is attempting to tie his political opponent to Cosmo DiNardo by distributing campaign materials that use a disturbing image of the confessed killer.

Bryan Allen, a Democrat running to unseat Bensalem Mayor Joe DiGirolamo, sent out a campaign mailer that depicts a shirtless DiNardo pointing a handgun toward the reader.

The accompanying text reads: "How did now Confessed Murderer COSMO DINARDO get appointed to the Bensalem Drug & Alcohol Advisory Board? MAYOR DIGIROLAMO APPOINTED HIM. WHY?!"

DiNardo, 20, a Bensalem resident, is charged with the gruesome killings of four young men at his parent's farm in Solebury Township in July. His cousin, Sean Kratz, 20, of Philadelphia, is charged in three of the killings.

DiNardo allegedly carried out the murders after arranging drug deals with the victims. Police found three of their bodies buried in a 12-foot-deep grave on the DiNardo family farm. After confessing, DiNardo pointed them to the grave of the fourth victim, hidden elsewhere on the property.

As a Bensalem councilman, Allen has called for greater transparency and increased vetting of township appointees. He said the community repeatedly has asked how someone like DiNardo could end up sitting on a drug advisory board, which was formed in 1989 to review matters that involve drug and alcohol use, education prevention and regulation.

His mailer criticizes DiGirolamo for appointing DiNardo to the Bensalem Township's Drug and Alcohol Advisory Board, despite having had more than 40 encounters with Bensalem police since 2011. 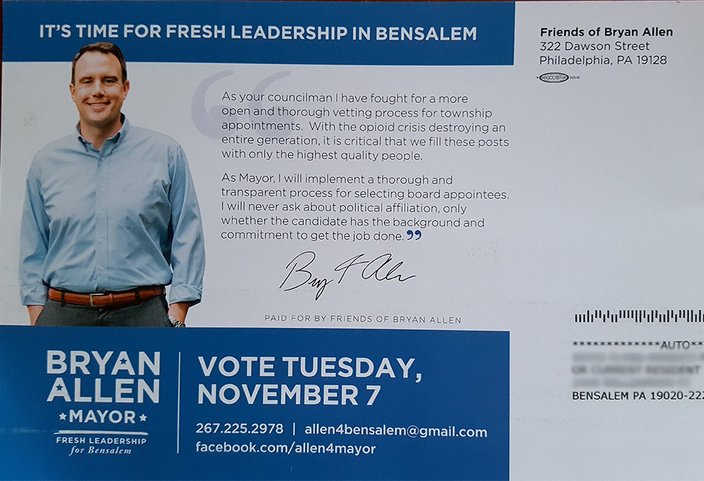 "It's a question of judgment," Allen said. "Over 40 contacts with our police department since 2011, which seems abnormally high to me. The mayor knows the family – they [perform] work for the township. You have to question, why would somebody like that get appointed to a drug advisory board when we're dealing with an opioid crisis right now?"

Allen defended the mailer's jarring photo when asked whether a photo of DiNardo in prison garb would send the same message.

"That picture was in the media," Allen said. "He put it out there. It was on his Instagram page. This was the stuff he was putting out on social media. ... If he's putting stuff like that out there, that should be a red flag before he gets appointed to a board." 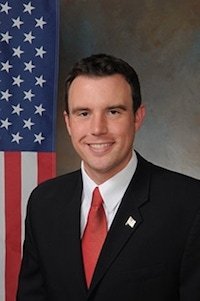 The advisory board holds no actual authority, but provides recommendations to the mayor. DiNardo served two years on the board, beginning in 2015, but he reportedly rarely showed up to the monthly meetings.

Neither DiGirolamo nor the Bucks County Republican Committee responded to a request for comment on the mailer.

In July, DiGirolamo declined to address DiNardo's appointment, saying he wanted to keep the focus on the families involved.

Township Solicitor Joseph Pizzo told Philly.com that appointments are made after an individual submits an informal application or when DiGirolamo reaches out to an individual. But Pizzo said he did not know the details regarding DiNardo's appointment.

Allen's campaign mailer includes a message from the councilman, saying he has sought a "more open and thorough" vetting process for township appointments.

"As Mayor, I will implement a thorough and transparent process for selecting board appointees," Allen's message reads. "I will never ask about political affiliation, only whether the candidate has the background and commitment to get the job done." 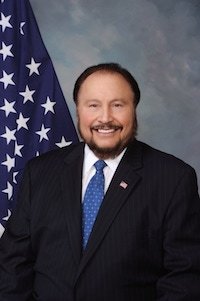 Joe DiGirolamo has served as mayor of Bensalem Township since 1994.

Allen deflected any notion that his mailer could be seen as politicizing the quadruple homicide.

"The mayor is the one that appointed Cosmo DiNardo and Bensalem has to live with this tie to this guy for the rest of our lives," Allen said. "I wish we weren't talking about this right now. I wish it wasn't even an issue. What ended up happening was horrible."

Allen reiterated his call for greater transparency in the appointment process, saying the mayor is the only elected official capable of proposing an individual for appointment.

Council members vote to approve candidates, but Allen said they rarely receive any qualifications and are not given time to vet any candidates.

"This is a really extreme example of him doing things the wrong way," Allen said of DiNardo's appointment. "How does it serve this board if this guy – who he should have seen red flags on – doesn't show up and gets reappointed?"

DiGirolamo, 80, is in his sixth term serving as Bensalem's mayor, an office he has held since 1994.

Allen, 39, is serving his second term on Bensalem's council, though the terms were not consecutive. He also serves as the chief of staff to state Rep. Tina Davis.