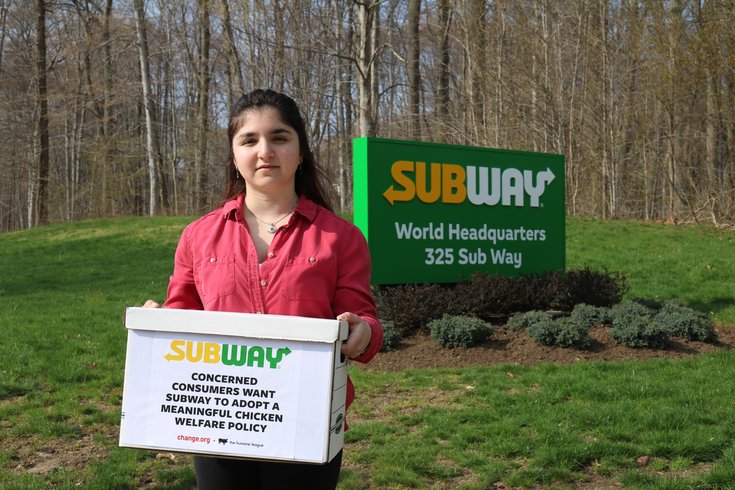 Lia Hyman has a lot on her plate: class, extracurricular activities, deciding what she's going to do after high school. Oh, and taking on Subway, one of the world's largest fast food chains.

She can cross that last one off the list. On Friday, the company announced it would accelerate the timeline to improve the welfare of chickens raised at its supplier farms, the central goal of a campaign "close to her heart" that Hyman's been working on for three months.

"Honestly, I am so proud and I am so excited," Hyman told PhillyVoice, further describing her reaction as both "shocked" and "super happy."

Earlier this month, Hyman, 18, a senior at Cheltenham High School, delivered a petition with more than 53,000 signatures to the restaurant’s headquarters in Connecticut, helping lead a 10-person demonstration outside. Hyman and other activists allege the methods used to raise chickens for Subway's food are unethical.

"It's empowering," Hyman said of the experience. 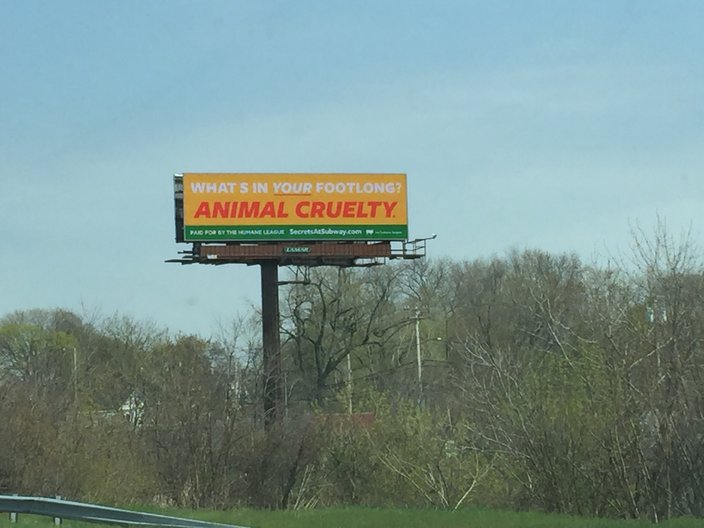 A billboard outside Subway's headquarters in Milford, Connecticut, asking the chain restaurant to address abuses in its chicken supply chain.

Hyman is an intern with The Humane League, a non-profit founded in Philly that aims to ensure ethical treatment of farm animals. According to one supervisor, Hyman does about as much leading as she does shadowing.

So active, in fact, the protest was just another day at the office for Hyman. The Humane League says they've given Hyman more and more responsibility over the past year, and she's taken it in stride.

"She was cool as a cucumber, totally not worried," Myers said. "It's something she's been so involved with for so long it kind of comes come second nature."

NOT QUITE GOOD ENOUGH

Hyman became a vegetarian in the 7th grade, but that was just because she thought eating meat was "weird." It wasn't until her junior year of high school she started doing research and watching documentaries on the sketchy practices used to grow and cultivate food in America.

Her interest led to a search for an internship. At first Hyman thought PETA, but she decided to stay local with The Humane League, with offices near Rittenhouse Square.

Since then, she's put on many hats for the organization, planning the nonprofit’s annual gala. But her real passion is the Subway campaign, which has been calling on the chain to stop using chickens that are allegedly genetically mutated to grow much larger than normal, leading to some being crippled under their own weight.

"Currently, chickens farmed for Subway are crammed by the thousands in filthy, windowless sheds, are selectively bred to grow unnaturally large, and are violently slaughtered," the Humane League's "Subway Secrets" website claims.

The website includes grotesque images of chickens in horrifying conditions before being slaughtered. Subway said in Friday's announcement that the gruesome videos and photos circulated by the Humane League were not shot in Subway supplier farms and "do not reflect how our chickens are raised today."

The group acknowledges that they weren't, but says they are "representative" of the conditions inside those farms.

Many chains have committed to no longer buying from farms that abuse chickens by 2024, including Burger King, Quiznos and Starbucks. Until recently, however, Subway hadn't gotten completely on board, according to The Humane League.

On April 20, Hyman, who says she used to frequent the sandwich chain often before boycotting it, arrived at Subway's headquarters to deliver the signatures collected on Change.org.

The group says Hyman was denied entry at the door, and after demonstrating outside, the company released a statement saying they would comply by 2027. That was not quite good enough for Hyman and her colleagues.

"If all these other restaurants are able to do 2024, why would Subway not be able to?" Hyman said before Friday's announcement, noting Subway has the most fast food locations in the United States. 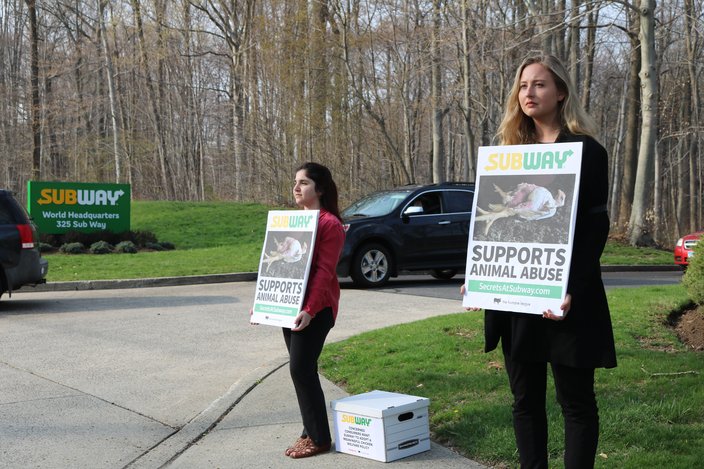 'IT'S DEFINITELY NOT OVER'

Subway has now decided to speed up the timeline. While the company claims The Humane League's information is "not true," they have agreed to meet Global Animal Partnership standards by 2024 and updated its animal welfare policy Friday afternoon.

The company added that it would have accepted Hyman's box of signatures "had we understood that the protesters wished to deliver them."

Going forward, Subway's example can help put pressure on other restaurants, who may be "anticipating the same request from The Humane League and myself," said Hyman. "It's very reassuring to see they're committed to this, but it's definitely not over in terms of campaigning."

The Humane League and Subway are now in alignment, and the nonprofit praised the company's decision to update its policy, which includes ensuring better living environments and higher activity levels for its chickens.

“As one of the largest chain restaurants in the world, Subway’s chicken welfare policy will reduce the suffering of millions of chicken in the United States each year,” said David Roman-Hidy, executive director of The Humane League in a statement.

Roman-Hidy also said he was "proud" to have partnered with Hyman, who handled the online petition that garnered internet buzz and took time off school to help organize and drum up the support of other student activists, which helped spark similar protests across the country.

It's time for @SubwayListens to actually LISTEN to its customers & stop supporting animal abuse! #SubwaySecrets pic.twitter.com/VxhXAGMS0T

"It's funny because I forget that she's a high school student," Myers said. "If I was 18 would I be able to do this? I'm not sure."

Has the mounting responsibility been too much? Not really, Hyman says, audibly shrugging over the phone.

"I should feel overwhelmed, but I don't at all," she said. "I've never, ever felt overwhelmed with The Humane League, thanks to the team. Everyone is so helpful."

With the Subway notch in her belt, Hyman now turns to graduation on June 15. She'll intern with The Humane League through the summer, handing out fliers about the benefits of becoming a vegetarian or vegan at the Vans Warped Tour.

For now, she can bask in the glory among her classmates as an accomplished activist, right?

Not really, she says.

"Nobody actually knows I've been the leader of this campaign," she said of her fellow students. "I keep pretty quiet."

Subway may beg to differ.