City Council gets earful at hearing on youth violence 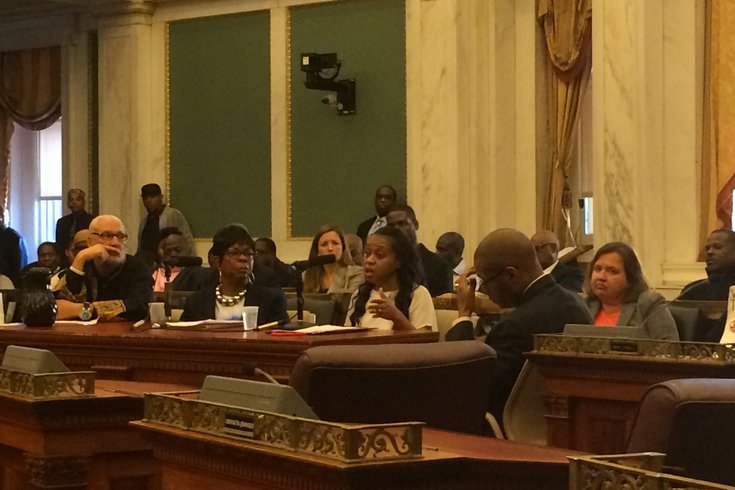 Felicia Pendenton, mother of Jayvon Mitchell-Pendleton, who was shot and killed on March 2, testifies on the impact of youth violence on her life and on her community.

Two weeks ago, Felicia Pendleton's son was murdered, shot three times as he walked along a sidewalk in Strawberry Mansion.

On Monday, she testified in front of Philadelphia City Council's Committee on Public Safety during a hearing about developing a strategy to reduce youth gun violence.

"My son had a whole life ahead of him," she told members of City Council. "He had a plan, he had a goal. And, they took that from him."

During Monday's hearing, Pendleton argued that even though she gave her son as much guidance as she could – she helped him through ADHD and bi-polar diagnosis and "went on all his school trips" – her son was killed, she said.

"These parents don't even know where their kids are ...," she said.

Pendleton said the city needs to do a better job enforcing curfews to make sure juvenile's aren't on the streets. During Monday's hearing, while representatives from across the city shared projects and initiatives designed to combat youth violence, she said that not enough is being done to let people know these programs exist.

"This is the first I'm hearing of many of these services," she said. She accused city politicians of coming to her community during elections. "Help them, help my son's friends ... If we don't get to these young men right now, that anger will turn to something else, and we don't want that at all."

During the day-long hearing, members of the committee on public safety heard also from Commissioner Richard Ross of the Philadelphia Police Department; George D. Mosee Jr., the city's first assistant district attorney; Karyn Lynch, chief student support officer for the School District of Philadelphia, and many more to discuss the problem of youth violence that the city faces every day.

According to Dr. Kathleen Reeves, senior associate dean of health equity, diversity and inclusion for Temple Medicine, violence in the city is like a virus.

Nationwide in 2012 taxpayers paid more than $229 billion in costs associated with gun violence, she said. That's about $700 per person annually or about $650 per gun, she said, noting there are more guns in the country than people.

In order to help tackle this problem, Reeves said she would support City Council creating a commission to study youth violence in the city.

Also, she said, education of the city's youth would be "part of the antidote."

The education element was a big part of Monday's discussion, with some back-and-forth between Mosee and Lynch over the true truancy rate for the city's public school system. Mosee said the district attorney's office has run a program called "Project GO" – "as in go to school," notes the district attorney's website – that could bring court action against students or parents of elementary or middle-school aged students if their children are truant.

That program targets students at charter schools, not students in the district's traditional public schools because of federal rules about sharing a school student's personal information prevents those schools from participating, he said.

Mosee said if the district attorney's office had an agreement with the school district to bring Project GO to public schools, more students might see benefits to their education because parents would see that tardiness could result in legal action.

"We would very much like to bring our program to public schools," he said.

At the end of their testimony, members of City Council asked the school district and the district attorney's office to deliver all correspondence about Project Go to council members to see if any progress could yet be made to expand the program.

Dr. Joel Fein, of the violence prevention initiative at the Children's Hospital of Philadelphia, testified that firearms are far too easily available for youth.

Fein said that CHOP has seen "an increasing number of youth injured through violence, with numbers rising from 308 in 2013 to 480 in 2015" and, he said, children as young as 12 have been shot in incidents of peer-to-peer violence.

Asked about the availability of firearms, Fein said juveniles contacted by the hospital have said it's "quite easy to obtain a firearm."

"I have friends that have access to their guns,and I could just call them," Fein said, quoting one juvenile's response.

With so much to digest, just what actions could follow Monday's hearing isn't set in stone.

During the meeting, Republican Councilman-at-Large Al Taubenberger said it was time "we do something as human beings, to help human beings."

Jones agreed, saying that the words of those who shared their testimony wouldn't evaporate into thin air after the hearing.

"These words will go into action," he promised the gathered crowd.

City Councilman Kenyatta Johnson, D-2nd, chairman of the committee on public safety, released a statement in which he said "we're in a state of emergency" due to youth gun violence. Monday's marathon council session provided input to help establish a commission that will work to fight back against the wave of violence, he said.

"This is a multi-faceted issue which requires a comprehensive, multi-pronged approach which is why it was important to hear from so many parties. We're in a state of emergency and we should all feel a sense of urgency to address this issue now," Johnson said in a statement. "Today, you saw that an organization cannot solve the issue of youth gun violence by itself. It was important to connect the dots between agencies and bring all parties to the table to get everyone on the same page. The legislation I introduced this year will establish an official Commission on Youth Gun Violence charged with making specific policy recommendations and outlining how to fund them."

Johnson also noted that as City Council begins the budget process, it's important that everyone works together to determine "where our resources are best used to address different underlying issues which contribute to youth gun violence."

"We must make reducing youth gun violence the number one priority in Philadelphia. At the end of the day, we're trying to keep kids from participating in gun violence and prevent them from picking up the guns in the first place," Johnson said.