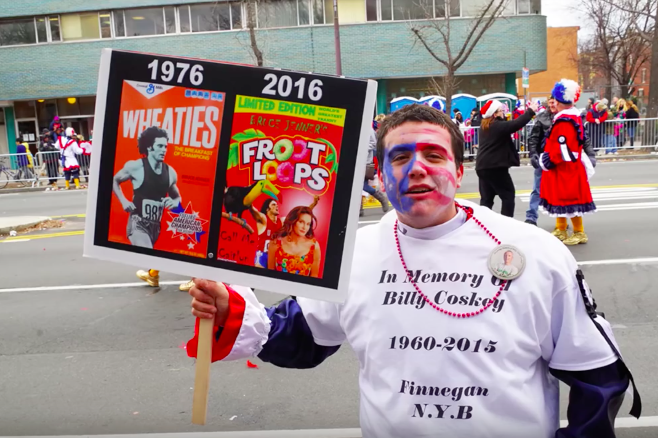 When one skit at the 2016 Mummers Parade mocked Caitlyn Jenner, people noticed.

Philadelphia Mayor Jim Kenney has asked the city’s Human Relations Commission and the director of the Office of LGBT affairs to examine possible changes to prevent the sort of insensitive Mummers Parade skits that draw negative attention to the city.

Everything from prescreening Mummers performances to sensitivity training is in the mix, HRC executive director Rue Landau and LGBT Affairs Director Nellie Fitzpatrick told the Inquirer, but it's too early in the process to project what the changes will be.

Kenney fielded questions about the Mummers controversy after speaking at Wednesday afternoon’s Interfaith Inaugural Prayer Gathering, where he said helping ex-offenders and immigrants and refugees acclimate to life in Philadelphia will be a priority of his administration.

“Making people feel bad about who they are is not part of the Mummers tradition and we need to work on that." – Mayor Jim Kenney

He said the Mummers-related move “is all about discussion, education and explaining to people who may not understand that sometimes, you do things that are offensive to people whether you meant to or you didn’t mean to.”

He rued the fact that a parade which could showcase Philadelphia in a positive light has done the opposite, thanks to a small group of proverbial bad apples. He also said that some skits performed by his former Mummers club often don’t pass societal muster when reflected upon today.

“Making people feel bad about who they are is not part of the Mummers tradition and we need to work on that. We need to evolve,” he said, noting that banning “blackface” in the parade also drew a backlash from participants. “Tough. It’s not appropriate. It’s not called for.”

This year’s parade saw an in-parade Mummer (now a former Mummer) sharing his profane anti-gay sentiments with the cameras, an alleged assault of a gay man near the parade route, a Caitlyn Jenner “parody” skit and children in “brownface" as opposed to the blackface festooning of old.

Mike Inemer Sr., a Mummer with the Finnegan New Year’s brigade that performed the skit about Caitlyn Jenner, told the Inquirer that the group “meant no harm to anybody at all.” He also told the newspaper that his group has asked for a meeting with Philadelphia Gay News publisher Mark Segal.

Fitzpatrick told PhillyVoice that she's been "blown away" by the number of people within the Mummers community who've already expressed interest in helping out.

"It does require the Mummers to cooperate and buy into what we're doing, and building those relationships takes time," she said. "We're seeing something right now that's different than in the past: people stepping forward offering to support change.

"It's not an optional thing. This is a city-sponsored parade, and we want to make it a celebration that everybody can be proud of. ... This is a new step, and it's going to require patience as we create meaningful change. If it was a quick fix, it would have been done a long time ago."

For his part, Kenney said he hoped the effort sparks much-needed conversations between the involved parties.

“As long as we’re intelligent, forthright and talk to each other, it’s important that we do this,” he said.