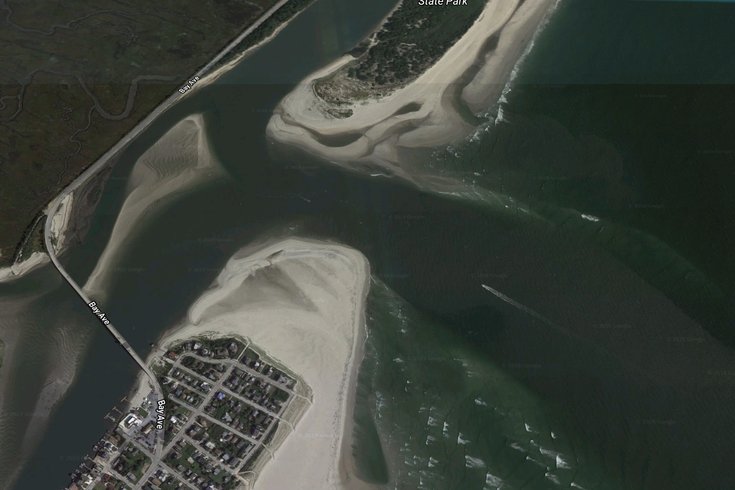 A satellite image of Corson Inlet, where a kite surfer was last seen drifting to sea Thursday night. The U.S. Coast Guard is searching for the surfer.

The United States Coast Guard is searching for a kite surfer who was seen drifting out to sea Thursday night near Ocean City.

Coast Guard Station workers in Atlantic City received a 911 call Thursday afternoon around 3:20 p.m., with a report of a kite surfer, dressed in all black clothing, seen being pushed out to sea after falling off a kite board. The surfer was roughly 500 yards off the Corson Inlet, according to a release from the Coast Guard.

Workers at Coast Guard Sector Delaware Bay launched a helicopter crew from an Atlantic City air station, as well as search crews on a 47-foot motor lifeboat and a 45-foot response boat, to search for the surfer.

A black and white ‘Ocean Rodeo Cypher 10’ kite was located in the water but the board and individual were not found, according to the Cape May County Sheriff's Office:

An active investigation is ongoing, according to the Sheriff's Office.

The Coast Guard asks anyone with additional information to contact the Sector Delaware Bay command center at 215-271-4960.