This is what the polar vortex looks like across the U.S., including record-low temperatures in Midwest 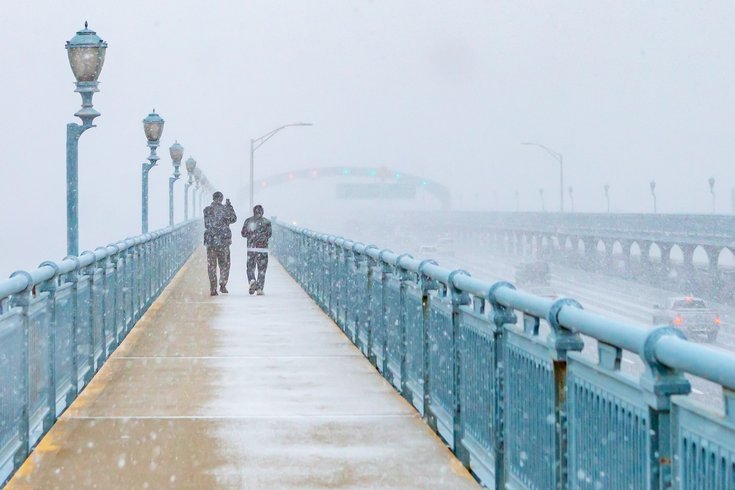 People walk across the Benjamin Franklin Bridge during a snow squall that brought a quick burst of heavy winds and snow to the region, Wednesday, Jan. 30, 2019.

A deadly polar vortex is sweeping across North America this week.

And we'll say it again: It's cold.

Temperatures fell to negative 22 degrees in Chicago (colder than parts of Antarctica, by the way) and officials are warning anyone outside for too long about the dangers of frostnip, hypothermia, and frostbite. On Thursday morning, areas of the Midwest were experiencing record-lows around minus 77 degrees, according to Accuweather.

We gathered some visuals to show just how cold a polar vortex is when it's negative 77 degrees.

Leaving the house with wet hair in the Midwest... pic.twitter.com/M7jp79orDq

To those of you currently not in the midwest, this is what -30° looks like. pic.twitter.com/NNL5sCHayc

things are only getting stranger pic.twitter.com/jX6yFsW4cs

When you spill your coffee in the Midwest pic.twitter.com/Vdvlc0UHPn

Everyone is throwing boiling water into the air to watch it freeze.

Not Siberia, its Chicago today..

Friend of mine sent me this from Chicago, in Midwest USA, temperature dropped to -18 f (-25 Centigrade) Windchill -50 f.
Polar Vortex is here..

Everyone in the Midwest: pic.twitter.com/LYrtcQwyp7

no one:
everyone in the midwest: pic.twitter.com/0O8q3WJYy1

Chicago was colder than the South Pole this week.

Polar Vortex on Chicago Lakefront at North Avenue, view from my building. pic.twitter.com/qABCykr5Y1

The polar vortex looks good on you, Chicago pic.twitter.com/C2pStKSWmL

And Philly is feeling it, too. The National Weather Service in Mount Holly, New Jersey is predicting the low on Thursday night to drop to 9 degrees. The wind chill on Thursday afternoon makes it feel like negative 3 degrees.

And the region has a 50 percent chance of snow on Friday, too.

It's cold and snowy out there! Code Blue is in effect until further notice. Dial 215-232-1984 if you see someone who needs shelter ➡️https://t.co/23ry2F7Art pic.twitter.com/RUfTktYZP1

With inclement weather today, use caution during your SEPTA travels as platforms, parking lots and vehicles may be slippery.

It's hard to decide what to do when it's that cold. So, probably nothing. Be safe and stay warm.

gooooob morning. i am making the executive decision. that it is too cold. to do anything at all today. secure a cuddle buddy. and recommence your snoozles