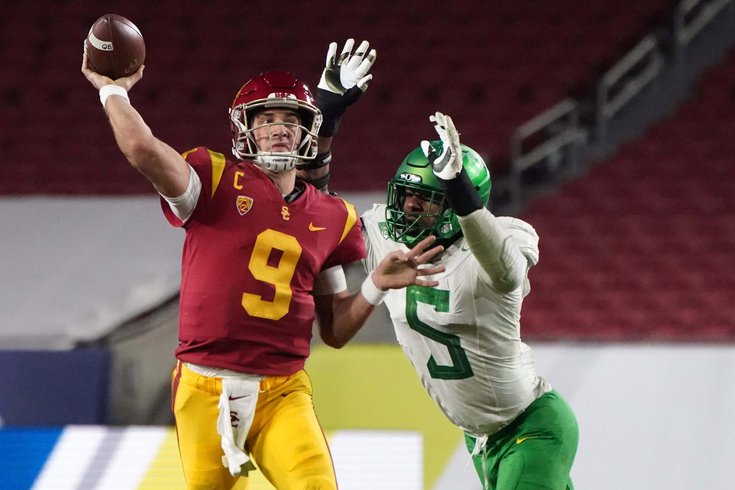 Thibodeaux was the No. 1 recruit in the nation coming out of high school (via ESPN recruiting) and he was an immediate stud as a freshman in 2019, as he led the Ducks with nine sacks. In 2020, in a shortened season (7 games) his tackles were up (42) but his sacks numbers were down a bit (3).

Heading into 2021, there are some who believe that Thibodeaux is the best prospect in the country. If you watch his highlight reel, it's just pure explosiveness.

Thibodeaux will win at the NFL level simply on lightning fast first step, his speed around the edge, and his inside counter moves when opposing tackles overset. If he can develop a deadly speed-to-power rush, he's going to be an absolute beast.

I'm sure the Eagles were bummed that there wasn't a pass rush prospect like this in the 2021 draft.

Thibodeaux sprained his ankle last week, so it's not a 100 percent certainty that he'll play.

Eagles corners struggled mightily against bigger wide receivers in 2020. At 6'1, 200 pounds, Banks has ideal size for an NFL corner, and he's physical at the line of scrimmage. He's the next in line of defensive backs coming out of Ohio State. A quick list of drafted Buckeye DBs since 2014:

Banks is currently being wildly overrated. For example, BetOnline.ag currently has Banks with the tenth best odds to go No. 1 overall in the 2022 NFL Draft. Lol, what? He has two career INTs and nine career pass breakups in three seasons. If you're in the mood to waste money, it would be more efficient to just flush it down the toilet, because that's not happening. He may not even go Round 1.

Anyway, Banks would make sense if the Eagles looking for a bigger corner to match size.

Kolar reminds me a little bit of a poor man's Zach Ertz in that he has great hands, he wins on contested catches against smaller safeties, he uses his body well to shield defenders from the football against man coverage, and he is savvy in finding holes in the defense against zone coverage. Also like Ertz, he's not going to wow anyone with his athleticism, and he's not exactly a scary runner after the catch.

They even have similar college production:

Who knows what to make of the Eagles' current TE situation, but Kolar is a player who can potentially give you some of the same attributes at Ertz, and could complement Dallas Goedert, as long as he can be had at a reasonable spot in the draft (late Day 2, early Day 3).

Hutchinson had an encouraging season in 2019, when he racked up 69 tackles (a big number for a DL), 10.5 TFL, six batted passes, and three forced fumbles. Heading into 2020, many were expecting big things from him, but he only played in two games before breaking his leg. For his career, Hutchinson only has 4.5 sacks, though in fairness, it's not over a large sample size.

He's a power rusher with some scheme/positional versatility, but he also possesses impressive athleticism, as he was tabbed as the No. 2 guy on Bruce Feldman's "freaks" list.

While at Michigan, [Kwity] Paye clocked the second-best 3-cone time on the team at 6.37. This offseason, Hutchinson timed 6.54, which would’ve been better than anyone at the 2020 Combine. In addition, he vertical jumped 36 inches, ran a 4.64 40 and ripped off a 4.07 shuttle time. Hutchinson also did a 2.57-second reactive plyo stair, which at 265, amazed even his strength coaches. He is the first athlete that veteran strength coach Ben Herbert has witnessed do a “Turkish Get-up” with 135 pounds and no collars (to lock on the plates) in 24 years working in college weight rooms. (Any mistake or hint of imbalance in keeping the bar perfectly level, and the weight will slide off.)

The Eagles are always on the hunt for DE talent.

London is obviously a wide receiver with great length at 6'5, but he does not fit the profile of your typical 6'5 receiver. As you'll see in his highlight video, he has mainly operated out of the slot in USC's offense, and as such, there isn't yet much in the way of evaluating his ability to beat press coverage.

In 14 career games heading into this season, London had 72 catches for 1,069 yards and eight TDs. He had 12 catches for 137 yards in USC's season opener last week.

If you watched the above video, you saw how effective he is at working the open areas of zone coverage. While that's not exactly an exciting selling point, I do think that that type of player could be effective in an offense led by a mobile quarterback that is likely to see a lot of zone coverage from opposing defenses. And with a wide catch radius, London's presence would help a quarterback who doesn't always have pinpoint accuracy.