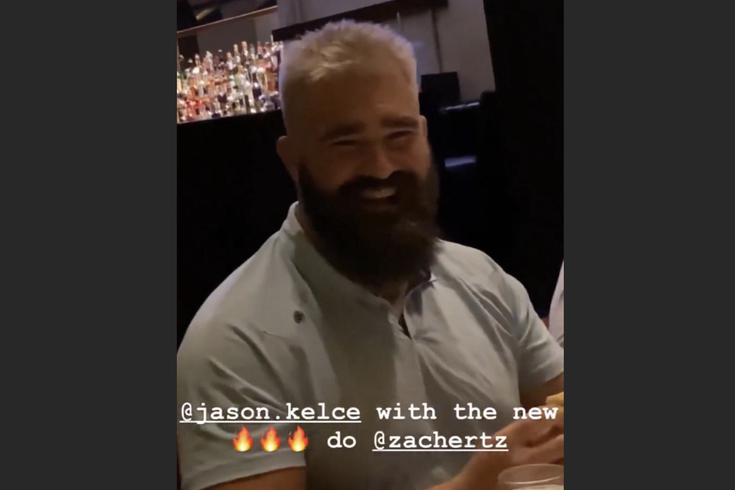 Eagles center Jason Kelce has never been afraid of making fashion statements. He came into the NFL with long, flowing hair and showed up to the Eagles Super Bowl parade in a Mummers outfit, which cranked up both the intensity and silliness of his raucous celebration speech.

Kelce even rocked a mullet last year during the early days of the pandemic.

At 33, however, Jason Kelce has outdone himself and dyed his hair blond in solidarity with tight end Zach Ertz.

The change in color popped up in an Instagram story from fellow offensive lineman Brandon Brooks, who showed Kelce grinning with his new look.

Kelce and Ertz also were spotted together Friday at Eagles practice with their matching styles.

Ertz is a California native who used to have golden curly locks as a teenager. He spent most of his Eagles tenure with a buzz cut until he showed up to camp this year — amid doubts about his return to Philly — with a freshly bleached head. Ertz later explained that he did it at the request of his wife, U.S. women's soccer star Julie Ertz. The background merely helps illustrate that Ertz's hairdo is something you might expect from a Californian of a certain age.

Kelce's reasoning for the change seems to just be that his buddy did it, so why the hell not? It's the most fitting Kelce explanation you could possibly hope to find.

The real question now is whether this is going to catch on with other Eagles teammates. Dog masks in 2017-18 made some sense. This would be purely an inside joke, but if you suddenly see Jalen Hurts or a rookie like DeVonta Smith or Kenny Gainwell coaxed into blonde hair as a rite of passage, then we may have another Eagles locker room trend in the making. The best would be Fletcher Cox or Nick Sirianni.

It's not unprecedented. PhillyVoice health editor and reporter John Kopp, who possesses "loads of mostly useless Phillies factoids," recalled a similar movement among Phillies bench players in 2003, when the so-called "Bench Dogs" dyed their hair blonde. Pat Burrell was an honorary member even though he was a starter.

As for Kelce, the most amusing thing to imagine here is how his baby must have reacted when she first saw her dad's new look. Some kids freak out if a mustache or beard suddenly disappears. This is all fresh right now. Kelce probably hasn't yet had his, "What have I done?" moment.