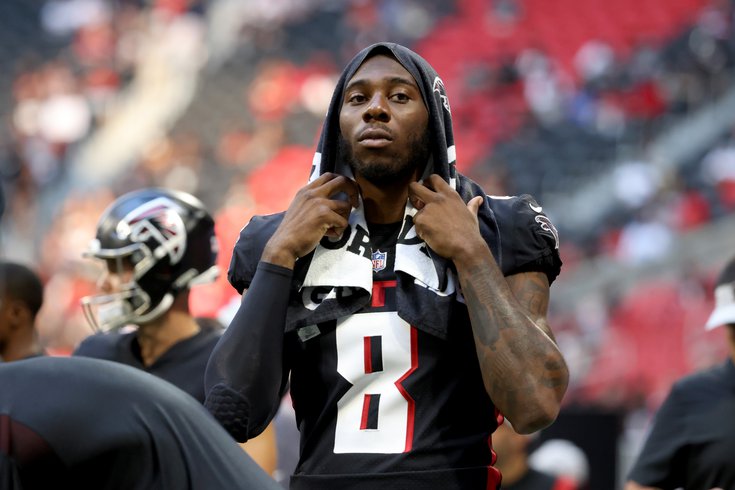 After making it to the Super Bowl in 2016, the Atlanta Falcons' roster became old and expensive, and their football team got progressively worse in each subsequent season thereafter. In 2017, the Philadelphia Eagles made it to the Super Bowl, and well, same thing, but at least they have a Lombardi Trophy to show for it.

Here are our five matchups to watch for Sunday's Week 1 opener between a pair of teams that have had similar downfalls in recent years.

1) The Eagles' speedy receivers vs. the Falcons' cheap secondary

The Eagles have invested a lot of draft resources into the wide receiver position over the last three years, and it's still an unknown whether they've found a group that can have a reasonable amount of success. The top three receivers heading into the season are DeVonta Smith, Jalen Reagor, and Quez Watkins, who are all unproven, but all capable of making big plays.

The Falcons, meanwhile, allowed the highest number of pass plays of 20+ yards in 2020, with 66 of them. They also tied for the third-most TD receptions allowed, with 34 of them.

In 2021, head coach Dan Quinn is gone, and the Falcons have three new starters in their secondary that they found at Dollar Tree, in CB Fabian Moreau, S Duron Harmon, and S Erik Harris.

Those three guys join second-year CB A.J. Terrell, who was the team's first-round pick in 2020.

If this young group of Eagles receivers is going to make any sort of impact this season, they should be able to get out to a good start against this less than impressive Falcons secondary.

2) The Eagles' offensive line vs. the Falcons' pass rush

If the Eagles' receivers are going to get off to that aforementioned good start, it wouldn't hurt if the offensive line gave Jalen Hurts plenty of time to throw. They should be able to do that against what looks on paper like a woeful Falcons pass rush. Their projected front seven starters have a combined 73 career sacks.

And it's not like it's even a young group. Their average age is just under 27 years of age. There are 15 active NFL individual players with at least 73 career sacks. Three Eagles players have at least 50.

So to recap, we've established that the Falcons have a bargain bin secondary, and a pass rush full of players who haven't often gotten to the quarterback over their careers. That's not a good combo.

3) The Eagles' rushing attack vs. the Falcons' rush defense

The Falcons' run defense wasn't bad last year, and if I'm being honest, I can't come up with any compelling reasoning on why they'll be good or bad in 2021.

But from a schematic perspective, it will be interesting to see what the Eagles look like offensively. Given their personnel on offense, it would make some sense for the Eagles to employ a run-heavy approach similar to that of the Baltimore Ravens. After all, the Eagles have a fast, tough quarterback in Jalen Hurts, an explosive runner in Miles Sanders, a good run-blocking offensive line, and speed on the outside to keep opposing safeties from creeping up into the box.

During the preseason, the Eagles' game plans were extremely vanilla both offensively and defensively, on the premise that they were trying to maintain the schematic mystery that comes with a coaching staff that includes a neophyte offensive play-caller in Nick Sirianni and a first-time defensive coordinator in Jonathan Gannon.

Sunday will be the first real glimpse into what the Eagles' schematic identity will be in 2021.

The Falcons' regular starter at LG would have been Josh Andrews, but he's on IR with a broken hand suffered during practice a week ago. You might remember Andrews from a pair of stints with the Eagles initially from 2014 to 2017, and then again in 2018. Andrews in now 30 years old, he's on his fifth NFL team, holy crap the idea that he's a starter for someone is just... 🤯

You might also remember Hennessy from the 2020 NFL Draft, as he was a local kid of interest, having played at Temple. Hennessy was a third round draft pick who filled in at guard at times as a rookie, and started at center late in the season after then-starter Alex Mack suffered a concussion. None of it went well, as he earned a 28.6 pass blocking grade from PFF.

Fletcher Cox remains one of the best defensive tackles in the NFL, and Javon Hargrave had a fantastic training camp. Those two guys have to dominate the interior of this young, shaky Falcons interior O-line.

5) The Eagles' linebackers and safeties vs. rookie TE Kyle Pitts

Pitts was a star player at the University of Florida who the Falcons drafted fourth overall in the 2021 NFL Draft, after he routinely roasted the SEC's best cornerbacks. His college highlights:

It's weird writing one of these matchup articles, and Julio Jones not being the most obvious threat to the Eagles' defense. While Calvin Ridley is a good receiver, the most dynamic player on the Falcons' roster is probably Pitts, and it will be interesting to see how the Eagles defend him.

"With Pitts, we watched all that college tape on all those DBs coming out and he was a guy that was winning consistently versus all the DBs I was watching, and he jumped off the tape," Jonathan Gannon said last week. "I was like, ‘Who is this guy.’ It's going to be a challenge for us to figure out, especially in Week 1, how they are going to deploy him."

It could be an early test for Anthony Harris to show his worth.