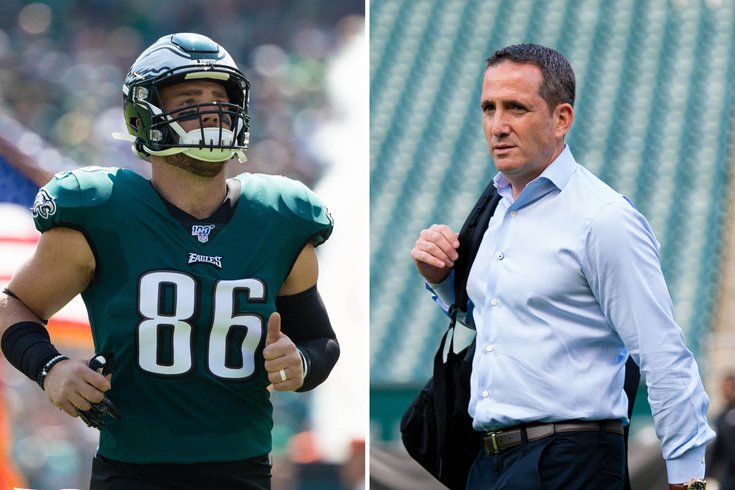 Carson Wentz has already taken his soap opera on the road to Indianapolis and Ben Simmons has made it clear to the Sixers he’s willing to do whatever it takes to get away from the toxicity that demands the occasional free throw be drained by a “superstar.”

If you’re a superstitious Philadelphia sports fan who believes “tragedy” comes in threes, Zach Ertz was surely next.

Like most superstitions, however, that one had a lot of holes.

Most notably, Wentz and Simmons played so poorly during their death throes in Philadelphia that they aren’t worth any hand-wringing, something that should have derailed the irrational thought process before it even began. Meanwhile, Ertz refused to use their battle-tested pernicious playbooks to get out of town.

“I love this city too much to ‘burn it down,’ like some people wanted me to do at times,” Ertz said when ending a months-long silence last week.

The former Pro Bowl tight end was kept away from the media this summer for good reason.

Everything you heard about the Ertz during the spring and summer was true. The organization was more than amenable to moving Ertz, a player, who from his own personal and mental-health perspective, had already moved on from the only team he’d ever known as a professional after an emotional 2020 end-of-season Zoom press conference.

Howie Roseman, the self-professed bad cop in all of this, was open for business, a staple of the GM's management style.

Roseman even had offers, the best of which being an early Day 3 pick in the 2021 NFL Draft.

Roseman, though, had placed a value on Ertz greater than the rest of the NFL thought it should be.

Think of it as the 2015-2019 Ertz in the Eagles GM's mind vs. the 2020 Ertz in everyone else's — the Ertz who had a career-worst season while dealing with an ankle injury, one the TE himself described as “friggin’ debilitating at times," and required offseason surgery, along with an eight-week period in the offseason where Ertz was on crutches for two of them, in a walking cast for another two weeks, and finally, a walking boot for a month.

“Allowing this offseason to focus on getting healthy for me was ultimately somewhat of a blessing in disguise, because to me, my mindset was that this ankle and this body isn’t where it needs to be, it’s all a moot point where I play at the end of the day,” Ertz explained. “So I was really at peace with the fact that each and every day I woke up, [I was] working on getting as healthy as possible."

Ertz was supposed to be gone on draft weekend, which turned into the soft deadline of training camp and then right up until the cutdown to the initial 53 with the belief around the league that Roseman was willing to wait for the Sam Bradford scenario, a late-summer injury to a starting-caliber player for a team that thought it was a contender.

Back in 2016, Teddy Bridgewater went down 11 days before the season opener in practice with a catastrophic leg injury. Armed with only expectations and a lightly-regarded veteran backup in Shaun Hill, Vikings GM Rick Spielman got leveraged by Roseman to give up what turned out to be the No. 14 overall pick in the 2017 draft [Derek Barnett].

Ironically that kind of moment did arrive and it was the same team and the same foolhardy GM. This time, emerging TE Irv Smith went down with a torn meniscus for the Vikings, and Spielman evidently still believes [likely, incorrectly] that Minny is a contender and was on the phone.

The query was about Dallas Goedert, however, the 26-year-old TE1 heir-apparent to Ertz who is in line for a big-money extension from the Eagles.

MORE: Following a summer of trade rumors and ankle rehab, Zach Ertz is ready to 'put it in the past'

To the surprise of no one who understands how Roseman does business and everyone who doesn't, the Eagles’ football-operations chief was either willing to move Goedert at a premium or purposefully setting the bar so high that he knew even Spielman wouldn't jump.

The belief from one source from the Minnesota side, which couldn't be confirmed by a second by PhillyVoice, was that the return of serve by Roseman was a first-round pick. Whatever it was, it was too steep for Spielman, who pivoted to acquire the much-less accomplished Chris Herndon, along with a sixth-round pick, from the New York Jets for a fourth-round selection.

"[Roseman] will take calls on anyone," a former Eagles employee told PhillyVoice. "That's the philosophy. It's about understanding what any player is worth and the market as a whole."

There is a belief, for instance, that any potential future move for Deshaun Watson, if the embattled Texans’ superstar QB is ever convinced to consider Philadelphia, would have to include Goedert, so there is value to calculating the young TE’s worth around the rest of the league.

If Spielman had offered, say a second-round pick for Ertz, the TE would almost surely be in Minnesota with the triple-tragedy prophecy hinging on Simmons’ greatest skill of all — impudence.

Roseman himself described the difficulties of his job back in the spring of 2020 with the bad cop reference.

“That’s the biggest challenge that we have and that I personally have — balancing what we’re doing today with where we’re going to be two-three years from now," Roseman said. “That puts me in a situation where sometimes I have to be the bad cop."

To Ertz last season, Roseman was Harvey Keitel abusing his authority, the living manifestation of an organization that turned its nose up after he played a postseason game with a fractured rib and a lacerated kidney.

When Ertz finally did talk to the media earlier this week it was a clear indication the all-clear was finally given for Week 1 in Atlanta.

“Last time we talked was obviously an emotional time for me,” Ertz said of his end-of-season sentiments. “But things change. I mean, things do change.”

“A lot of people had raved about him, particularly Trey Burton, one of my best friends — he was in my wedding — and he loves the guy,” Ertz said when asked about Michael by PhillyVoice. “And he’s been so good for me mentally during this time.”

It was actually Michael who began to rebuild the bridge allowing Ertz to return. When everyone in both camps was acting like Ertz wouldn't be a part of the 2021 Eagles, Michael was the one reaching out and keeping communication open for a player he wanted to coach if there was going to be an opportunity.

Meanwhile, nearly every day before practice, Sirianni talks with Ertz for an extended period, an example of the coach's first core value — connecting.

As for that bad cop, Ertz has even backtracked, at least a bit, on that.

“This organization has believed in me, not only the first eight years of my career, but they believed in me probably more than so than anyone else did in the league," he explained. "They were standing firm to what they believed was fair. And ultimately I can’t fault them for that.”

To reiterate, the “bad guy” in all of this thought Ertz was more valuable than everyone else.

“What’s happened in the past is in the past to me. I’m not thinking about it,” Ertz claimed.

What Ertz is thinking about is being in the rarified air of the NFL's best tight ends where the barroom debate was once: George Kittle, Travis Kelce, or Ertz?

“I feel better now than I did at this time last year going into the season physically, mentally, emotionally,” Ertz said. “So there’s no doubt in my mind that I can be exactly the player I was if not better than I was, how everyone talks about me prior to this past year.”