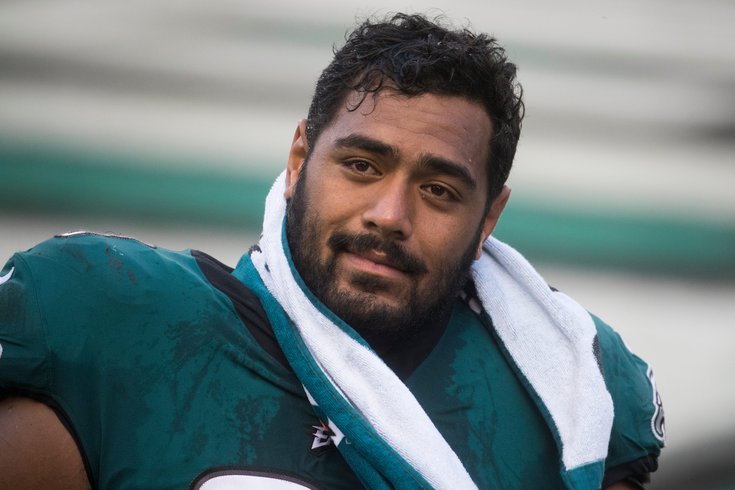 Question from Philly Rob: Hey Jimmy, where do you think Jordan Mailata currently ranks amongst LTs across the league? I know he only has a small sample size of games played, but curious what you think his ceiling is? Can he be an elite LT?

During the offseason, I published of series of articles on players who are either new to the Eagles, or are already with the team but we maybe didn't know a lot about them just yet. In case you missed those, generally speaking, I'm pleased with how they turned out, so give them a look, please and thank you:

For the most part, I watched every snap from the 2020 season from those 16 players above. The most fun player to watch was Mailata, and one of the reasons why was because when you watch his 2020 season chronologically, you can see how his confidence grew as the year progressed, and he just got better and better. If you were to check out any of the above player reviews because you want to feel good about a player going forward, I would read Mailata's.

For you lazy folks, the Cliff's Notes are as follows:

We reviewed him in April. Since then, Mailata has come out and had by far his best training camp of his career. He lost a significant amount weight, and should be better equipped to handle the types of speed rushers that he struggled with in 2020.

I don't want to go as far as to say that he'll be "elite," but I do think that he is poised to become a well above average starting LT in 2021, and we'll see if he can continue to get better.

Question from RKotite: Has any team ever failed to win the Superbowl because they gave away too much of the playbook in the preseason? I mean, I get competitive edge and all, but isn't this a bit overblown?

That was perhaps more of an extreme example, but the same concept applies. Do you know what the Eagles' offense is going to look like? Their defense? I think we sort of have our ideas of how they'll look, but it's hard to argue that they'll be more difficult to game plan for than, say, a Jim Schwartz defense, where you pretty knew what he was going to try to do.

Are the Eagles going to win a Super Bowl, and we'll look back and say, "It was because they didn't show anything in the preseason games?" Of course not. But that's not how every advantage should be viewed. I do think that there's a reasonable argument that the Falcons will find some challenges in game planning for the Eagles Week 1, and Nick Sirianni is right to try to preserve that mystery for as long as possible.

Question from Kephas: Could the Eagles defense surprise us this year? If you're Atlanta Week 1, how would you attack them?

My five matchups for this game are already written, and if I'm Atlanta, I'm terrified of what the interior of my offensive line looks like heading into Week 1 against Fletcher Cox and Javon Hargrave. I'd be playing the quick passing game, trying to coax the safeties up, and then using max protect to take shots down the field, hoping to exploit whoever starts opposite Anthony Harris at safety on the back end. If that's Rodney McLoed, I'm finding out if he can run. If it's K'Von Wallace, I'm making him prove that he knows where he's supposed to be, and that he can make tackles after the catch.

Question from Flip-a-del-phia: Double question: First, if the Eagles are 0-7 to start, who do you think gets traded? The obvious answer is Ertz or Dillard, but any other options? Second, if the Eagles are 7-0 (or similar) who would you like to see Howie go after to make a run? Position or specific player.

Question from diggity: Usually when you have a new coaching staff, the new regime always wants to bring in "their guys." We saw that a lot with Schwartz and even more with Chip Kelly. Not so much with the rookie head coach and the defense coordinator. Thoughts?

We haven't seen it on offense yet, but there's evidence to suggest that they're bringing in players to fit what we think  Jonathan Gannon wants to do. They brought in a couple of ex-Vikings in Eric Wilson and Anthony Harris, and drafted a couple of versatile defenders in Milton Williams and Zech McPhearson, who I think fit his scheme.

Question from Ryan's Hope: Why the rush with salvaging Tyree Jackson's season? Couldn't they wait to unwrap him next season?

He won't take up a spot on the active roster now that he's on IR, and it didn't cost them any players, since no Eagles were claimed off of waivers.

Question from cormeagles: I think Genard Avery could make a pretty big impact this year, as the SAM role seems to suit him perfectly. Thoughts?

Avery was a guy we covered in the aforementioned player review series, but during the 2020 offseason. After watching his snaps, here's what we concluded:

Conclusion: Avery's appeal is that he can maybe be a hybrid linebacker / pass rusher. The Eagles only used him as the latter, in his limited snaps. His best usage was as a stand-up rusher in a "Joker" role.

It remains crazy to me that the team traded for a player who so badly fit Jim Schwartz's scheme, but whatever. Looking ahead, yes, I agree that the SAM role in this Gannon defense will be a far better fit for Avery's skill set. I don't know that he'll make a big impact, necessarily, but he'll be in a better position to succeed now.

Question from Hmm: Which third linebacker do you project will get the most snaps outside of Wilson and Singleton?

Yeah, that's a good question. Under Schwartz, the third linebacker was the guy who came in on run downs, like Joe Walker, Dannell Ellerbe, and most most recently, T.J. Edwards. In this new defense, the third LB could be Avery in some situations, and Edwards in others. I don't know who will get get more snaps, but I do see Edwards' snaps decreasing.

Question from RKotite: Serious question, with the rules allowing vets on the practice squad, is it possible to put Flacco there and open up a another spot on the 53 man roster?

To get Flacco on the practice squad, first you have to release him. That's gonna cost you a dead money hit of $1,560,000 this year, and then another dead money hit of $1,940,000 in 2022. Then you'd have to re-sign him back to the practice squad, assuming he'd even be interested in that, and I doubt he would. So, no, they're stuck with him for the entirety of the season.

Question from Hi Jimmy: Hi Jimmy, any surprising Pro Bowl pick from this team? I'm talking about a player who has not been there before.

I would go with Hargrave. He had a hell of a camp, and there aren't many great DTs in the league right now.

Question from Kevin from Canada Eh: I always cheer against Dallas but rooting for Tom Brady in the season opener just feels wrong, your thoughts?

This season, if you're an Eagles fan, you're going to have to hold your nose and root for a bunch of teams to win that you normally wouldn't. For example, it would be ideal for the Eagles if the Patriots are good, since they play the Dolphins twice and the Colts once.

And then I don't know how many of you dislike the Bears, but they should be a team you root for as well, since the Giants have Chicago's first-round pick. The rooting guide will be fun to write this year.

Question from Sam: What were Howie Roseman's five best and five worst roster moves this offseason to arrive at the current 53?

I'll do three each.