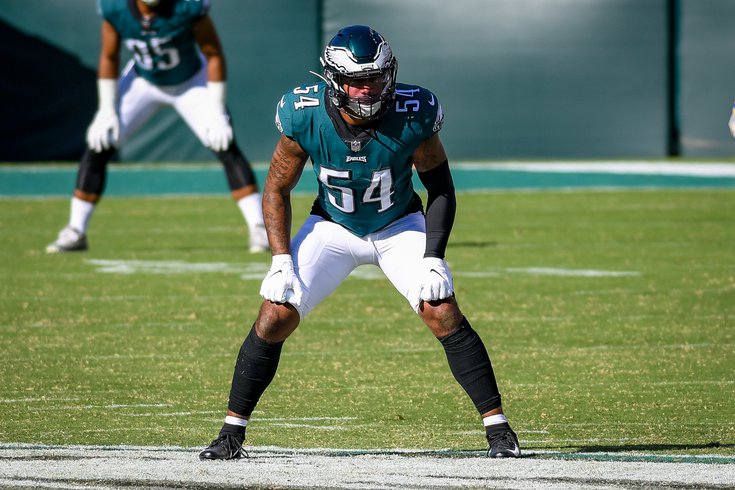 During the offseason, we'll be taking a look at a handful of players who are either new to the Philadelphia Eagles, or are already with the team but we perhaps don't know a lot about them just yet. Today we'll take a look at linebacker Shaun Bradley.

After selecting Davion Taylor in the third round of the 2020 NFL Draft, the Eagles doubled up on linebackers when they took Bradley in the sixth round. Like Taylor — and a slew of other linebacker acquisitions over the last half decade or so — Bradley is undersized with good athleticism, including 4.51 speed.

Also like Taylor, Bradley didn't play much his rookie season in the regular defense, though he did get more snaps — and was clearly higher on the depth chart — than Taylor. A look at his season snap counts:

As you can see, Bradley only played 76 snaps in the regular defense, but he was a core special teamer, and his 284 special teams snaps were second on the team, behind only Alex Singleton (298). Bradley likely would have led the team in special teams snaps if he hadn't missed a game and a half with an injury to close the season. He had 8 special teams tackles, and one ticky-tack penalty.

For this exercise, I watched Bradley's defensive snaps against the Football Team, Ravens, Saints, and Cowboys. I did not hunt down his game action when he played five or fewer snaps. In doing so, I was actually pleasantly surprised with what I found.

To begin we should note that Bradley pretty much only played on run downs, in three-linebacker packages. As a run defender (and granted — small sample size here), he generally seemed to be assignment gap-sound, he showed good instincts, he was never really bullied by blockers, and he made the tackles he should have made. Here's a quick look at his tackles in the regular defense on the season:

As you can see, he made a number of tackles at, behind, or near the line of scrimmage.

There wasn't much to review of Bradley in coverage. Oddly, ProFootballFocus gave him a coverage grade of 37.6 (that's very bad), which confused me. In the snaps I watched, Bradley wasn't targeted once. Not once, lol. On the season, pro-football-reference had him down for one target which was completed, for 7 yards, which must have occurred during one of the games he played five or fewer snaps (that I didn't hunt down).

MORE: WTS: Is it time for the Eagles to just release Zach Ertz? | 5 Eagles breakout candidates in 2021

Bradley's lowlight of the season came on a TD pass to Michael Gallup, in which Gallup caught a pass in front of Marcus Epps. Bradley tried to make a tackle on Gallup, who made a nice move, causing Bradley to slip and fall.

But there was also good. My favorite Bradley play on the season was against New Orleans, on the game-changing strip sack by Josh Sweat. Bradley is the MIKE backer below, and he runs down the seam with the slot receiver. Taysom Hill is looking there, but he doesn't like it enough to pull the trigger, so he moves to the next receiver in the progression which gives Sweat enough time to make his big play:

Ultimately, though, there wasn't much to judge Bradley on in coverage as a rookie.

A couple weeks ago, I looked at all of Davion Taylor's snaps on the 2020 season, and what I saw was a player who simply wasn't ready to play in the regular defense, and who still has a long way to go before he can contribute positively. Those types of projects are in a tough spot, because they need game action to get better, and defensive coordinators have to be willing to live with bad short term results in order for them to grow. Taylor has a ways to go before he can play at all, in my opinion, while Bradley showed that he was at least a competent enough player to get meaningful snaps while he continues to grow.

It also certainly doesn't hurt that Bradley was a core special teamer, in terms of his chances of making the roster in 2021, and I would even consider him a decent candidate to earn a bigger role in the regular defense in Year 2.