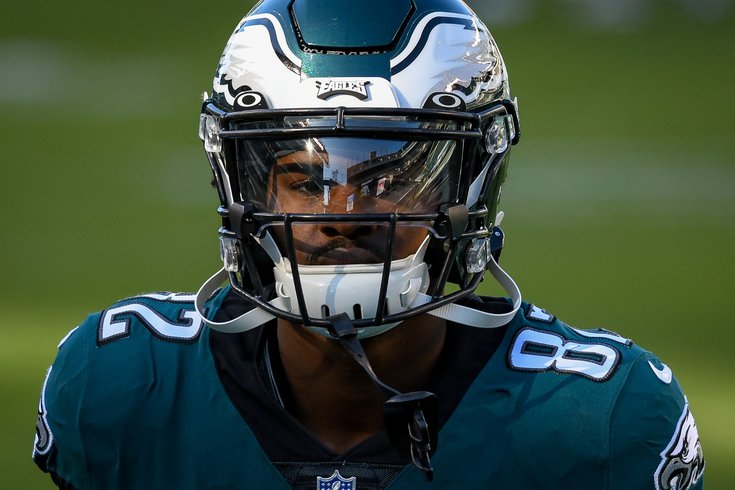 John Hightower after the Philadelphia Eagles game against the LA Rams at Lincoln Financial Field in Philadelphia on September 20, 2020.

During the offseason, we'll be taking a look at a handful of players who are either new to the Philadelphia Eagles, or are already with the team but we perhaps don't know a lot about them just yet. Today we'll take a look at 2020 fifth-round pick John Hightower.

Hightower's rookie season got off to a fantastic start in training camp, when he stacked impressive plays routinely, practice after practice, rarely ever dropping any passes. In fact, he was the leading "stock up" vote getter in a "stock up - stock down" media poll after the first 10 practices of camp. (Please don't actually click that "stock up - stock down" poll, as it's an embarrassment for the Eagles' media contingent, lol.)

When the lights came on and the players put on the shiny pants for the regular season, however, Hightower's encouraging play in training camp did not carry over into the actual games. And really, he was one of the least efficient players on a roster filled to the brim with underachievers in 2020.

On the season, Hightower was targeted 29 times. He had 10 catches, 167 yards, 0 TDs, three drops, only five first downs, and five passes intended for Hightower were intercepted. When Eagles quarterbacks targeted Hightower in 2020, they had a QB rating of 15.2. Here are those targets:

That was a tough six minutes, huh? Hightower displayed an ability to get behind the defense on occasion, which is obviously an appealing skill for a wide receiver, but there was little else that was positive to take away from his rookie season.

• Speed: He got open twice down the field both against against the Steelers and Ravens, and again against the Giants, but was only able to finish twice. Still, his speed is there.

• Hands: As noted above, he caught everything in training camp, but had some egregiously bad drops in real games. One was an easy catch over the middle against the Football Team. He maybe heard footsteps? The other was in the back of the end zone against the Steelers at the end of the first half. On the latter drop, he probably wouldn’t have stayed in bounds anyway, but he still should have made the catch. And then of course his drop against the Ravens on a 3rd and 20 was his lowlight of the season.

• Route running: He ran a few nice slants, most notably on a 4th and 4 against the 49ers. He also ran a nice comeback route against the Steelers. Sold the deep route and turned, gaining separation on Joe Haden, giving Carson Wentz an easy throw.

But ultimately, it was very easy for opposing corners to knock him off his route and his timing with any sort of contact. On deep balls, defenders were able to steer him out of bounds, and he generally did a poor job fighting through any kind of contact. Even on a play against the Ravens in which Marlon Humphrey should have been called for pass interference in the end zone, it didn't take much to completely slow Hightower down. Ideally, you'd like to see him shake off those two little grabs and make the play anyway.

• Contested catches: Non-existent. And frankly, corners were more aggressive making plays on the ball at the catch point than Hightower. A glaring example was WFT's Jimmy Moreland's INT Week 1. Obviously, that was a bad throw by Wentz, but you'd like to see more fight from Hightower to win that battle at the catch point, or at least cause an incompletion. Trevon Diggs tracked the ball better than him as well on a couple of deep balls against Dallas.

• Run after catch: On his first catch of the season, he seemingly went down on his own instead of absorbing the hit. That was not encouraging. He had zero broken tackles on the season, and went down pretty easily on any contact. He showed run after catch ability at Boise State, but we didn't see it with the Eagles in 2020.

• Situational awareness: Against the Bengals, before the end of the first half with under a minute left on first down, he caught a quick pass, could have easily gotten out of bounds to stop the clock, but cut inside for an extra yard or two and the clock continued to run. Against the Steelers, in a very similar situation, he did it again, likely costing the team points. Mistakes are forgivable for young players, but not when they repeat them.

After that impressive camp, the Eagles gave Hightower a decent amount of playing time early in the season in 2020, and even worked shot plays into the game plan specifically for him. In the final eight weeks of the season, however, he only played 53 snaps, and was even a healthy scratch in three games.

Looking ahead to 2021, the Eagles' new staff could not have been impressed with Hightower's tape when they watched the wide receivers, and sure enough, Hightower was not with the first, or second-team offenses in OTAs. DeVonta Smith, Jalen Reagor, and Greg Ward were with the 1's, while Travis Fulgham, Quez Watkins, and J.J. Arcega-Whiteside were with the 2's.

Hightower was a 24-year old rookie (he turned 25 in May), so he's on the older side for a second-year player. He's actually the third-oldest receiver on the roster, though obviously, it's an extremely young group.

Heading into training camp this offseason, Hightower is probably the seventh receiver in the pecking order. Because he had a strong camp as a rookie, it's fair to wonder if another good camp won't help him as much, since he gave the staff and the front office a false positive during the summer last year. The bet here is that he's probably on the outside looking in at the moment, particularly because he played zero special teams snaps last season, and will have to emphatically outperform some of the receivers ahead of him to earn a roster spot on the final 53.