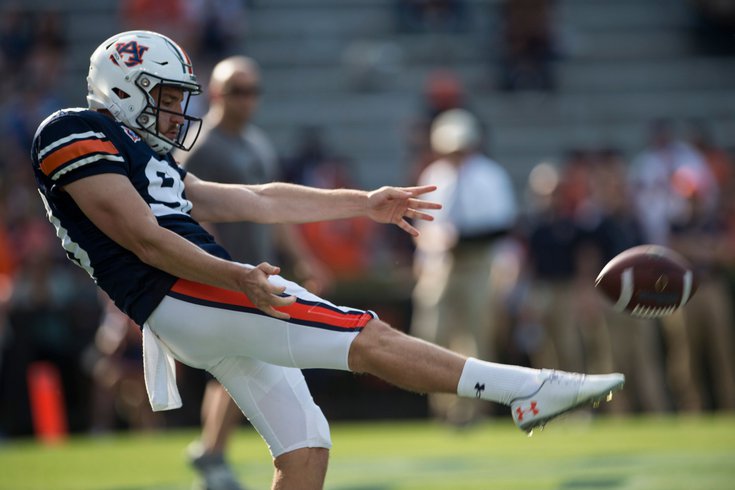 There's a new punter in town.

During the offseason, we'll be taking a look at a handful of players who are either new to the Philadelphia Eagles, or are already with the team but we perhaps don't know a lot about them just yet. Because it's Easter and many of you won't be reading today anyway, we'll look at the punter the Eagles signed to a futures contract a few months ago, Arryn Siposs.

The Eagles had a decision whether to tender punter Cameron Johnston as a restricted free agent this offseason at $2,133,000, and they made the correct decision not to. Johnston subsequently became an unrestricted free agent and signed with the Houston Texans on a three-year deal worth $8 million. Good for him!

Siposs was a Australian rules footballer, and a pretty good athlete, at least for a punter. Here he is in action:

However, after undergoing three shoulder surgeries, Siposs gave up on Australian rules football and he moved on to something of a fallback plan, which was to become an American punter. He enrolled at Auburn, and became their starting punter as a sophomore at the age of 25. His numbers at Auburn:

Somewhat alarmingly, opposing returners averaged 17.2 yards per return on 14 punt returns in 2019. Elijah Moore returned a punt 55 yards against Siposs on a punt that (by my amateur stopwatch skills) had just 3.7 seconds of hangtime (that's bad). Against Oregon, Jevon Holland had a pair of long returns against Siposs on a couple of punts that both had 4.2 seconds of hangtime (not as bad as 3.7, but also not great).

In 2020, Siposs had interest from a few teams as an undrafted rookie free agent, and he chose to sign with the Detroit Lions. He competed with 2019 UDFA Jack Fox for the punting job in training camp, a battle that Fox won, but was apparently close. Obviously, in 2020, there were no preseason games for Siposs to show what he could do in live NFL action.

Fox would go on to be one of the more effective punters in the NFL, according to these nerds who track punters:

ProFootballFocus agreed, as they had Fox as the highest-graded punter in the NFL last season. Still, the Lions thought enough of Siposs to keep him on their practice squad all season long.

Now 28, but still inexperienced, Siposs is currently the only punter on the Eagles' roster. In my view, the Eagles should give him competition in training camp, if for no other reason than to give me a chance to time punts all summer. Don't take this away from me, Eagles. Thanks in advance.