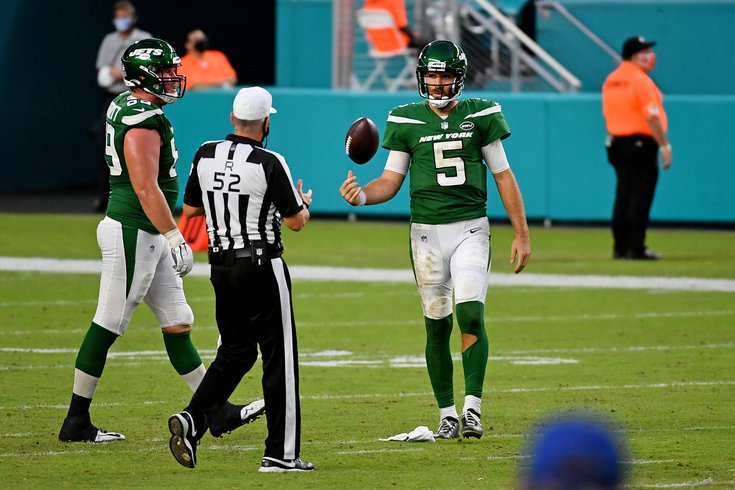 During the offseason, we'll be taking a look at a handful of players who are either new to the Philadelphia Eagles, or are already with the team but we perhaps don't know a lot about them just yet. In February, we kicked off the series by looking at Jalen Hurts' 2020 performance. Today we'll look at his backup, Joe Flacco.

As we pointed out after the Philadelphia Eagles signed Flacco last week, paying a veteran backup quarterback anything more than the league minimum (or something close it) was absolutely baffling for a team that has already essentially admitted that they will not be serious contenders in 2021.

Giving Flacco $3.5 million in guaranteed money (with the chance to make as much as $7.5 million) felt like an especially egregious overpay, given that Flacco earned just $1,562,500 on a one-year deal with the New York Jets in 2020, meaning that the Eagles gave him a 224 percent increase in pay after a season in which Flacco went 0-4 as a starter.

The two most common rebuttals to criticism of the Flacco signing were as follows:

In his initial press conference with Philly media, Flacco was asked several different ways about a possible mentorship relationship with Hurts. While Flacco made sure to say that he would support Hurts, he also made it clear to point out that he was there to compete. Can't blame him. Including the playoffs, the guy has started 190 games over his career. Making the transition to anything else can't be easy. But certainly, Flacco doesn't seem to be about that mentorship life in the same way that, say, Josh McCown was.

As for the logic behind the pay increase, while Flacco went 0-4 in his games with the Jets last year, I figured we should at least take a look at his performances to see how he played.

Below is a review of each of his games. To note, back in February, we took a look at Hurts' 2020 season, and noted his strengths and weaknesses from a traits perspective. There's no need to do that with Flacco, right? I mean, you've all seen him play. Big guy, statue in the pocket (at least late in his career), big arm (or at least a big arm once upon a time), inconsistent accuracy... sound about close to what you know of him? Well, that's what he essentially was in 2020. His games:

Dink and dunk city from Flacco in this game. Boring to watch. The one big play the Jets got was a 52-yard completion from Flacco to Jamison Crowder, who got wide open behind the Cardinals’ defense. Flacco’s pass was a little underthrown, causing Crowder to have to wait for it, and allowing Jordan Hicks to chase him down after the catch.

You can understand where Flacco would just want to make certain that he got the big gain, but with a better throw that leads Crowder, it’s probably a TD.

Anyway, we only show that to point out that if you take away that deep gift to Crowder, he had a 4.5 YPA on the day. The Jets scored 10 points in an easy Cardinals win.

Hard to watch. The Dolphins blitzed a lot, the Jets’ passing game as a whole had no answers, and Flacco was certainly a big part of their struggles on the day. The Jets got shut out, 24-0, and they were 2 for 17 on third down, including 0 for their first 12 third down conversion attempts.

There were only two drives in the entire game in which the Jets were in field goal range. On one, Flacco took a bad intentional grounding penalty for a huge loss, which caused the Jets to attempt a 55-yard field goal, which they obviously missed. The other was this:

Oof. Play some circus music behind that.

Flacco also got baited into a pick by Xavien Howard playing trail technique:

And he almost threw another pick, that probably would have been a pick 6.

He did have deep ball opportunities to Breshad Perriman, but couldn’t connect. On one, Perriman dusted Howard, who held Perriman, causing an overthrow. No flag. The other was this woefully underthrown deep shot off of Flacco’s back foot that maybe could have been picked by a corner who was more interested in making a big play than swatting the ball like Dikembe Mutombo swatting Corn Flakes in a Geico commercial.

Ideally, Flacco would step into that throw and take the shot from the blitzer, which is of course easy for me say, but probably a reasonable business decision from a 35-year old on a then 0-5 team.

There wasn't an Eagles offensive performance all season long in 2020 that was as bad as this game from Flacco and the Jets offense, which is saying something.

It started out shaky, as he threw what should have been an INT (and maybe a pick 6 if Frank Gore can't make a tackle), but was lucky it was dropped.

Thereafter, he settled down and hit a high percentage of throws. In the first two games, Flacco wasn’t automatic on the short stuff, but he was accurate on them in this game. He also got better protection than he had previously, and had some pretty throws down the field. He connected on a 50-yard deep ball to Perriman.

And this end zone shot to Crowder was a beauty.

The third TD went to Perriman, on a play in which a Pats CB fell down. Fade ball in the end zone. Looked like it had good placement even if the CB hadn’t fallen.

Late in the game, the Jets had a 7-point lead, and Flacco threw an INT on a deep post. He was likely reading the safety, and didn’t see the CB on the opposite side dropping deep and reading the play nicely. That gave the Pats a chance to tie it.

With a tie score, Flacco took a bad coverage sack on 2nd and 2, and then missed an open receiver on 3rd and 7, leading to a punt. The Pats kicked a FG on the ensuing possession for the win.

Overall, it was an encouraging performance from Flacco and a near win for a then 0-8 Jets team, but if it’s a high-profile starter, he’s probably getting heat for not closing the deal late.

The Jets, still winless at this point in the season at 0-9, got out to fast start. They blocked a punt, and the Jets rushing attack punched it in for an opening score. On the ensuing possession, the Chargers drove the field, but Keenan Allen fumbled near the goal line, and the Jets recovered.

And then, in an instant, on Flacco's first pass attempt of the game, lead... gone.

Oh my God my eyes! There's nothing complicated above. It's man coverage across the board, and Flacco lazily flips a throw to the out route by the slot receiver, which just sits there like a hanging curve ball over the middle of the plate to Barry Bonds. That slot corner owes Flacco a sincere hand-written thank you card. I mean Good Lord.

The Chargers built on that lead, going up 24-6. In the second half, the Jets called a steady diet of shot plays against the Chargers' woeful defense. Some hit, some missed, and there were a handful of DPIs. Flacco actually made a few nice deep throws down the field, like this:

But ultimately, he finished with a 50 percent completion percentage, and the pick 6 was just an absolutely abysmal play from an NFL quarterback.

Flacco has had a good career in the NFL, as he has compiled a career record of 98-77, mostly with a strong Ravens team. When his career concludes, he won't quite make it to Canton, but he's a lock for the Ring of Honor in Baltimore.

Obviously, the Eagles saw something they liked from Flacco that caused them to pay him significantly more than it would have cost to sign a veteran on a near-minimum deal for a guy like Mike Glennon, or Matt Barkley, or simply re-signing Nate Sudfeld for next to nothing, or (fill in any other still-available quarterback here).

Flacco made some nice throws against the Patriots, but they were far more the exception than the norm in his four games in 2020. After reviewing Flacco's actual play, it was worse than the stats would indicate, and it's confounding how the Eagles felt that he what he showed in 2020 -- not to mention the fact that he's also now a year older -- was worth a 224 percent raise in pay.