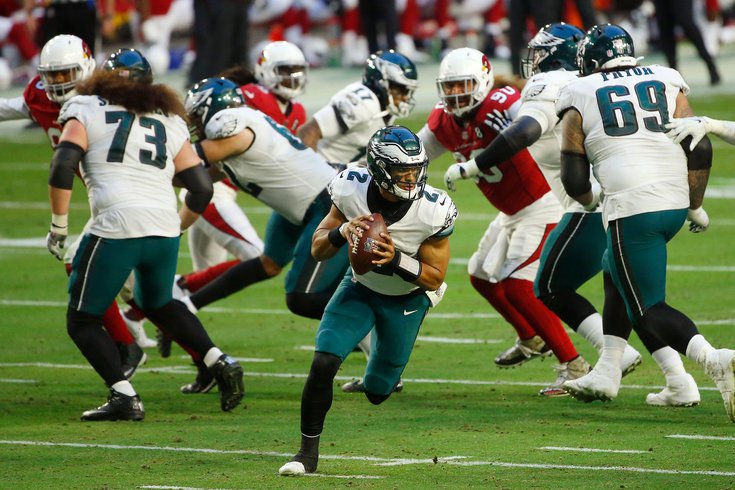 During the offseason, we'll be taking a close look at Philadelphia Eagles players of interest who are currently on the roster, and who could be shaping the future of the franchise. This offseason, there's no better place to start than with Jalen Hurts, who is the only quarterback on the Birds' roster after the team traded away Carson Wentz.

Should the Eagles draft a quarterback at sixth overall? Should they spend legitimate resources on a veteran quarterback in free agency who can seriously compete with Hurts for the starting job? How the team views Hurts will factor in heavily on what kinds of resources the team puts into the quarterback position. #Analysis.

And so, let's take a hard look at Jalen Hurts' 2020 season, and begin to evaluate what he is as an NFL player right now, as well as what he potentially can be going forward.

A brief summary of Hurts' season

Hurts was mostly a non-factor in those games, with the exception of Week 6 against the Ravens. We showed the positive impact Hurts had on that game back in October:

The Eagles should use more Jalen Hurts in their offense, with gifs and stuff, article and thread 🏃‍♂️💨https://t.co/T6N0dCSRt3

In Week 13 against the Packers, with Wentz struggling (as he had all season long), Doug Pederson had seen enough and inserted Hurts into the game in the third quarter. Wentz would never play another snap for the Eagles again.

A brief rundown of Hurts' overall performances the rest of the season:

• Week 13, at Packers: Hurts' entry into the lineup sparked the offense in the second half, and it felt pretty clear that he had shown enough to earn a start the following game against the Saints.

• Week 16, Cowboys: Hurts started this game off hot, but he would eventually throw two bad INTs, and fumble twice, losing one. Hurts helped his stock against the Saints and Cardinals, but did not help himself in this game.

• Week 17, Football Team: Hurts did not have a good game, and as you'll recall, Pederson inserted Nate Sudfeld into the game in the fourth quarter, and yada yada yada, the Eagles ended up with the sixth overall pick. Hurts was 7-of-20 for 72 yards, an INT, and a QB rating of 25.4. He did have two rushing TDs. It's worth noting that he was playing with a couple of fourth string OTs, and practice squad level receivers.

The most alarming stat, as the above emoji is warning you, was his completion percentage. While completion percentage isn't always a definitive measure of a quarterback's accuracy, especially in a bad scheme with sub-par receivers, the feeling here is it was still earned, because Hurts missed plenty of makeable throws. (We'll get to his accuracy in more depth below.)

The high sack numbers are somewhat less concerning to me. Last week, we took a look at the Eagles' league-leading 65 sacks last season, and assigned blame for each of them. We determined that seven of the sacks that Hurts took were Hurts' "fault," however, most of them weren't egregiously bad like so many of Wentz's were. In fact, Hurts became a runner on five of them (three times even running out of bounds) and were marginal losses near the line of scrimmage.

If there's a concern in regard to the sacks he took, it's that he bailed too quickly from the pocket and became a runner before he could have exhausted one last receiver in his progression.

As a runner, Hurts is probably already a bigger threat than every quarterback in the NFL not named Lamar Jackson. In four games (eh, we'll call it 4.5 games -- three starts, two half games, and a sprinkling of other snaps throughout the season), Hurts ran 63 times for 354 yards, three TDs, and 25 first downs.

If you were to extrapolate that over the course of a 16 game season, that would be 1,259 rushing yards and 11 rushing TDs. Obviously, that is not sustainable over the course of a season, much less a career, but it does show how effective he was with his legs in the games he played in 2020.

Hurts as a passer

First, the good. Hurts threw with touch, and he was often effective making plays on designed rollouts on the run. He was also able to make his share of off-schedule plays when the original play call broke down. A look at some of his better moments as a passer:

Unfortunately, there was more bad than good, and it begins with his accuracy. As noted above, Hurts completed a paltry 52 percent of his throws. He missed more than his share of completable passes, shown here:

There is hope on the accuracy front. Hurts did improve his accuracy throughout his college career, so perhaps there's some reason to believe he can do the same in the NFL.

Hurts' accuracy aside, there's also the matter of his arm strength. I won't profess to be some sort of star NFL scout, but I have seen my share of quarterbacks up close in the decade I've covered the team. I've seen some guys with howitzers, like Michael Vick and Wentz. Conversely, I've seen noodle-armed guys like Matt Barkley and Mike Kafka. It's not rocket science.

Observing him in training camp, Hurts certainly isn't Barkley or Kafka, but he also isn't close to Wentz or Vick. His arm strength is fine. It just isn't a positive attribute, at least in comparison to other NFL starters. If you'll note in the passing highlight reel above, you won't see him lasering fastballs through tight windows. What you will see in some of the throws in the lowlight video above is that he often left deep throws short.

In summary, the biggest concern about Hurts becoming a legitimate NFL starter over the long haul – and this is kind of a big one – is his general throwing ability.

Hurts as a runner

As a runner, Hurts is a faster, souped-up Dak Prescott. He can run over defenders and break tackles like Prescott, but he's also substantially faster. Hurts makes many of the runs below look effortless, and before you know it he's 20 yards down the field.

There is one major concern with Hurts as a runner, though. He fumbles a lot. In fact, he had nine(!) fumbles on the season, though he was fortunate to only lose two of them. Some of those were on bad snaps, or a pass rusher was able to knock the ball out in a way in which you wouldn't blame Hurts. But he did have some downright bad fumbles.

For example, against the Saints, he had an inexcusable fumble in a clock-killing situation with a 10-point lead and under two minutes to play. All he had to do was protect the ball, and the game was over. After the fumble, the Saints got a quick TD, drew to within three and nearly recovered the onsides kick. He also fumbled while running with the ball (he was no longer a passer) against the Cardinals and Cowboys.

Hurts can run like a running back, but he also has to protect the ball like one too.

MORE: The case against the Eagles drafting a QB with the sixth pick

Hurts never once appeared timid or fearful whenever he got opportunities. His play sometimes resembled that of a rookie, but his demeanor did not. After his performance against the Cardinals, Doug Pederson said that Hurts played with poise, leadership, and he showed both physical and mental toughness, particularly in the second half. I agree. The moment was never too big for Hurts, and he always looked like he belonged.

Hurts' intangibles and his running ability are both very intriguing, and he should be given an opportunity to start in 2021. However, the top four quarterback prospects in the 2021 NFL Draft are all thought to be clearly better passers, and they all have some running ability in their own right. If the Eagles are on the clock at pick No. 6, Hurts' ability as a passer is probably concerning enough that the Eagles will seriously consider drafting a quarterback.