Is there such a thing as a good loss? If so, the Philadelphia Eagles' loss on Sunday to the Arizona Cardinals would qualify, as they got a good performance from their young quarterback, it was an entertaining game, and the team improved its draft position.

Postgame, Doug Pederson said that Hurts played with poise, leadership, and he showed both physical and mental toughness, particularly in the second half. I agree.

There were some mistakes, of course. We didn't get a great end zone look at Hurts' intentional grounding call that resulted in a safety (thanks FOX!), but that was a play where he probably could have shown more awareness by taking an extra step or two before he threw the ball away. And there were some inaccurate throws early on as well. Oh, and he fumbled three times, but was fortunate not to lose any.

But once he settled in, Hurts looked very much like a legitimate NFL starting quarterback with a bright future ahead. He even impressed some of the old heads:

I thought his highlight of the day was his TD run.

With Darius Slay, Avonte Maddox, and Rodney McLeod all out, the Eagles were forced to play a bunch of no-name guys in their secondary.

Predictably, the Eagles got gashed through the air, yardage-wise, as Kyler Murray threw for 406 yards and 3 TDs.

And yet, the no-name secondary still managed to come up with their share of plays. Nickell Robey-Coleman and Michael Jacquet each had forced fumbles, and Marcus Epps had an interception in the end zone. Jacquet in particular looks like he might be a decent player? I'm certainly interested in seeing more of him in these last two games.

A week after allowing no sacks to the Saints, the Eagles allowed six sacks to a Cardinals defensive front that was missing three starters. Of course, the Eagles were down a bunch of starters of their own, as they've been all season long, but the line's inability to protect Hurts was a factor in this game.

If you're a "glass half full" type, maybe the O-Line's bad day just makes Hurts' performance all the more impressive?

I'm going to go out on a limb here and proclaim that Alex Singleton is better than Nate Gerry. In the six games since Singleton became the three-down linebacker who never comes off the field, here are Singleton's tackle totals:

He's averaging 11 tackles per game during that span. If you were to extrapolate that over 13 games (NFL stat pages haven't updated each team's 14th game game yet), he'd have 143 tackles, which would lead the NFL by 16 tackles.

There was a play against the Cardinals on a key third down in which Murray pitched to Chase Edmonds, and Edmonds looked like he'd get the first down easily, when Singleton got to the edge with speed, and cut him off, well short. The Cardinals then went for it on fourth down, and were denied.

Singleton has proven, at a minimum, that he should have some steady role in the defense next season.

The Eagles hit on a bunch of big plays on Sunday, for the first time in a long time.

And they got chunk plays from a lot of different receivers. Zach Ertz, Alshon Jeffery, Quez Watkins, Miles Sanders, and Jalen Reagor all had catches of at least 20 yards. Travis Fulgham and Dallas Goedert each had catches of over 15 yards.

On 3rd & 20... rookie Quez Watkins takes the short pass to the HOUSE. #FlyEaglesFly

That little spin was simple-but-effective, and then the speed to get to the end zone is obvious. I want to see more of Quez Watkins down the stretch.

8) The 'What Could Have Been' Award: DeAndre Hopkins

DeAndre Hopkins is really, really good. #Analysis. On the day, he had nine catches for 169 yards and a TD. But beyond the stats that he churns out year after year, he routinely makes catches that other receivers can't, and he helps his quarterbacks, as he did against the Eagles in Sunday.

The Eagles had a chance to trade for Hopkins this offseason. Instead, the Texans traded him to the Cardinals for the absurdly low price of a second-round pick, a fourth-round pick, and a running back in David Johnson whose best days are behind him.

Now, maybe the Texans were just morons and they highly valued Johnson for some reason (certainly possible), but how much more could the price have been? I don't know the answer to that, but the Eagles probably should have paid it.

9) The 'Movin' On Up' Award: The Eagles' draft position

Heading into Week 15, the Eagles had the ninth pick in the draft order. They are now seventh, after wins by the Dallas Cowboys and the Los Angeles Chargers. A look at the draft order, via Tankathon: 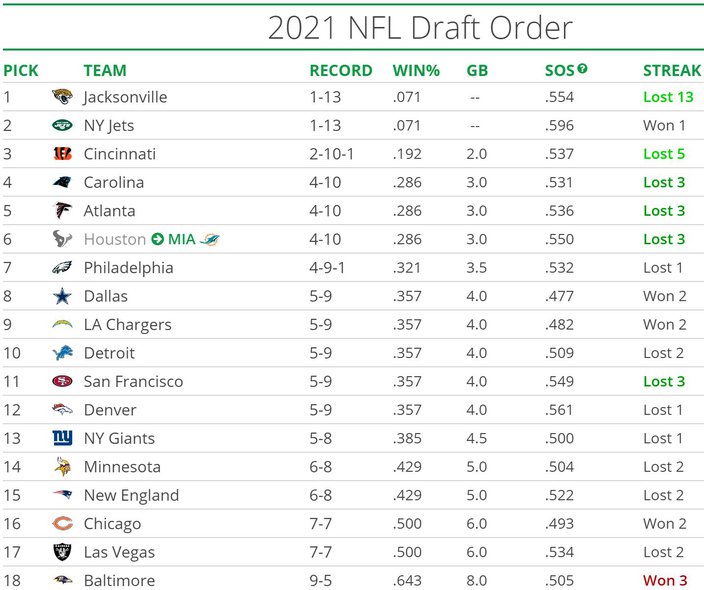 Had the Eagles beaten the Cardinals, they would have been 12th in the draft order, which is a significant difference.

The early Eagles-Cowboys line in Dallas next Sunday? Eagles (-1), according to TheLines.com's consensus odds.

10) The 'Cellar Dwellers' Award: The Eagles, in the pathetic NFC East

It finally happened. The Eagles are now dead last in one of the worst divisions in NFL history, though as noted already, at least it didn't happen after one of their uglier losses this season. The updated standings:

And yet, while a longshot, the Eagles can still win the division, as the great Deniz Selman notes:

One more loss and the Eagles will be mathematically eliminated.