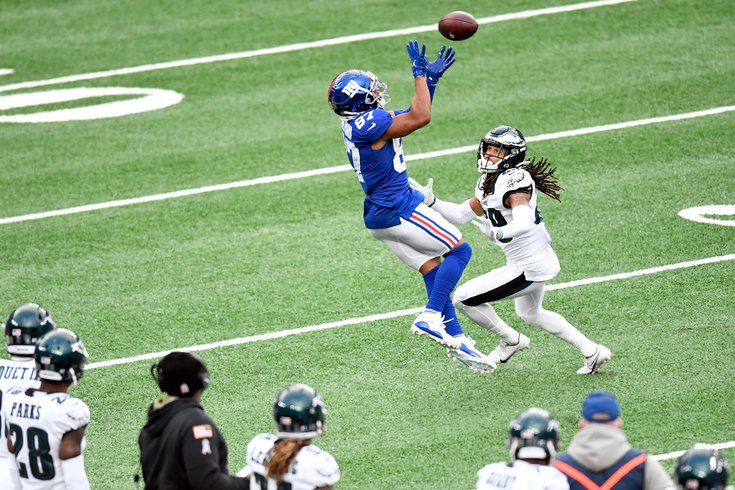 For the zillionth consecutive offseason, the Eagles need corners.

Over the last few weeks, we took a look at the Philadelphia Eagles' positional groups, and decided which players should stay, and which ones should go. Going through that exercise further confirmed what we sort of already know, which is that this roster stinks and that the Birds have needs at almost every positional group this offseason.

Here we'll rank their offseason needs from most glaring to most stable, though we should note that there really isn't that big of a difference between one of their biggest needs (cornerback, for example), and say, linebacker, which we have as their seventh biggest need. In other words, if your ranking would look different than ours, we probably wouldn't put up much of a fight disagreeing.

Jalen Hurts is the only quarterback currently under contract through the 2021 season. So, uh, spoiler: The Eagles are going to sign or draft at least one quarterback this offseason, and probably more.

So the question isn't whether the Eagles will add quarterbacks. Rather, it's what kind of resources will they put into the position. That will depend heavily on what the Eagles think they have in Hurts.

As we saw in 2020, Hurts is undeniably a weapon as a runner. He's not only fast and athletic, but he can also run through tackles. He also possesses crucial intangibles for the quarterback position, like intelligence, leadership qualities, toughness, and poise.

The downside is just his general throwing ability, as there are significant concerns about his accuracy, and to a lesser degree, his arm strength. He has also shown early in his career that he is prone to fumbling. We'll have a more in-depth piece on what we saw from Hurts during the 2020 season soon.

The Eagles could go one or more of the following directions at quarterback this offseason:

The bet here is that they take a quarterback at sixth overall.

RELATED: The case against the Eagles drafting a QB with the sixth pick

The Eagles only have one legitimate NFL outside cornerback in Darius Slay, who is now 30 years old and coming off an underwhelming season. Frankly, if another team were to be interested in trading for Slay, the Eagles should jump at that opportunity, but that is an unlikely scenario.

In recent years, the Eagles have often had delusional assessments of the abilities of the players on their roster, and their feeling that Avonte Maddox could handle outside cornerback responsibilities is a prime example. Maddox should be fine moving back inside to the slot, but clearly the Eagles have a glaring short-term hole at one corner spot, and they'll have the task of replacing an aging Slay on the horizon.

What else is new?

DeSean Jackson is already gone, and Alshon Jeffery will soon follow. The Eagles will be left with a bunch of young receivers who (in theory) have upside, but in reality shouldn't yet be considered solid starters.

Jalen Reagor, Travis Fulgham, Quez Watkins, and John Hightower would fall into that "potential" bucket, while it's probably safe at this point to call J.J. Arcega-Whiteside a bust. And then of course there's Greg Ward, who is a good story, and who has at least caught the football when it has hit his hands, but who is not a threat to opposing defenses, given his career 8.3 yards per reception.

The Eagles need to find another playmaker on the outside, and one for the slot.

Malik Jackson won't be back in 2021, Fletcher Cox is on the wrong side of 30 (the Eagles should trade him, but probably won't), and Javon Hargrave had a disappointing 2020 season after the Eagles spent a boatload of money on him in free agency.

The Eagles clearly prioritize the interior of their defensive line, given the extraordinary amount of money they have dumped into the position in recent years. They need to add youth and depth.

There's a slight chance that Derek Barnett won't be back with the Eagles in 2021, but it's more likely that the Eagles will get a contract extension done with him this offseason that will lower his cap number in 2021. Even if Barnett is back, the Eagles need to continue to add edge rushers to the pipeline, since (a) it's a position that takes some time for young players to develop, and (b) Brandon Graham will turn 33 in April.

Ideally, the Eagles would like to have two good starters and two good rotational guys who can produce when given opportunities. Right now, they have an aging Graham, and two "maybe starters" in Barnett and Josh Sweat. This is probably a bigger need than many are perceiving, since the positional importance is so high.

Jalen Mills is a free agent and Rodney McLeod very likely won't be ready to start the 2021 season in time. The Eagles could bring back Mills on a one-year deal while K'Von Wallace continues to develop, but they need a long-term centerfielder type to replace McLeod, who will turn 31 in June.

The 2021 safety draft class is full of good Day 2 prospects.

Wait, linebacker is only seventh on this list? Yep. While the Eagles have gone way too far in deprioritizing the position, their philosophy on linebackers is unlikely to change drastically. In other words, don't expect them to draft Micah Parsons in April.

The Eagles do have a pair of solid-but-unspectacular linebackers in Alex Singleton and T.J. Edwards, and they did take two linebackers in the 2020 draft. Those guys will have a chance to develop.

Could they use a stud three-down linebacker? Absolutely. I mean, duh. Just don't expect one to be added this offseason. Maybe during free agency in 2022.

Brandon Brooks turns 32 in August, but he should be back in 2021. To be determined how effective he is after returning from his second Achilles tear. Jason Kelce is now 33, and even if he doesn't retire, it wouldn't make much sense for him to want to come back to this team, so a post-June 1 trade would be logical. Isaac Seumalo has become a solid starter at LG, Jack Driscoll has experience in college at guard, and Nate Herbig showed some left-right versatility in 2020, and could be a steady backup going forward.

There are more pressing positions to fill, but it would make sense to add more depth.

The Eagles have a good starter in Dallas Goedert. They could use a pass-catching tight end to complement him.

Yes, the Eagles gave up 65 sacks in 2020, but I would view the offensive tackle position as being relatively deep, so much so that a trade of Andre Dillard would make sense. The Eagles have Jordan Mailata and Dillard at LT, as well as Lane Johnson and Jack Driscoll at RT.

Miles Sanders is a good lead back, and Boston Scott is fine as a passing down guy. The Eagles could use a proper backup to handle early down duties to spell Sanders in-game or whenever he's injured, and serviceable running backs can be found later in the draft.

Jake Elliott had his struggles in 2020, but his contract makes him uncuttable. The Eagles could maybe have a new punter in 2021, but obviously that is about as far from a need, relatively speaking, as this team could get.

MORE: Three free agents who make sense for the Eagles