Now that the Eagles have traded Carson Wentz, who should be dealt next? 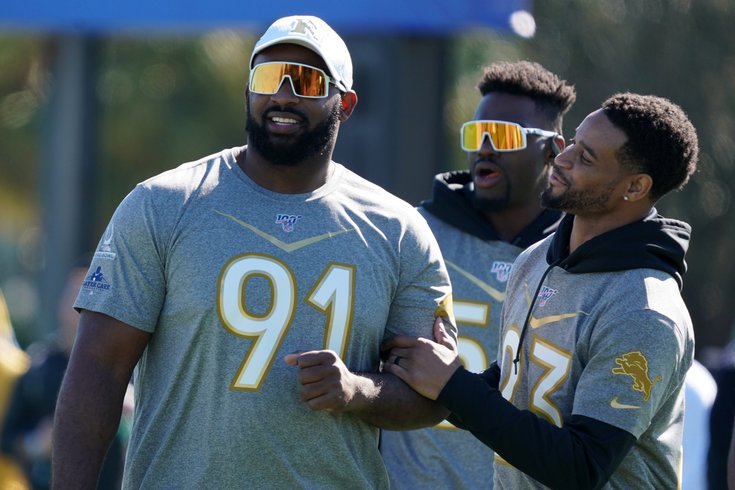 Should we maybe be thinking about Eagles DT Fletcher Cox and CB Darius Slay as tradable players?

Now that the Philadelphia Eagles have traded Carson Wentz, could Howie Roseman begin a good old fashioned fire sale? Given that the roster is old, bad, super expensive, and in need of a multi-year rebuild (because of Roseman's mismanagement, it should be noted), more players could soon be following Wentz out the door.

Prior to the 2020 season, Ertz made it known that he was unhappy with his contract situation, after seeing George Kittle and Travis Kelce get new deals. We argued back in August that the Eagles should be in no rush whatsoever to do an extension with Ertz, and as it turned out, it's one of the rare correct things the front office has done in a while.

Looking forward, Ertz has a base salary of $8,250,000 in 2021, and he has a cap figure of $12,471,500. If the Eagles release or trade him they will have $7,769,500 in dead money counting against their cap, with a savings of $4,702,000. A savings of just under $5 million isn't exactly a treasure trove of money, but it will certainly help the team get back under the salary cap. Ertz himself seems to know the end of his tenure in Philly is coming soon, as he got emotional in his season-ending press conference.

As for what the Eagles can get in return for Ertz via trade, I wouldn't hold out hope for much, if anything. To begin, the team has no leverage, in that the rest of the league already knows that the Eagles have to make difficult choices before the start of the new league year, which is simultaneously (a) the deadline to be cap compliant and (b) the time at which trades are permitted once again. In other words, a release would help the Eagles get under the cap by the deadline, but a trade would not. They also know Ertz is a goner, one way or the other.

But beyond that point, Ertz's value isn't even particularly high at the moment anyway. He's 30 years old, he just had his worst season as a pro, he now has a pretty extensive injury history, and (as noted already) his base salary in 2021 is going to be $8,250,000 in a year in which the salary cap is going to be around $30-$40 million less than was projected, pre-COVID.

#JimmySays: It was recently reported that the Seahawks and Colts had some level of interest in Ertz. It's worth noting that the Seahawks paid a washed up Greg Olsen just under $7 million last season for some reason, so all it takes is for one contender to be willing to overpay, but the bet here is that the Eagles won't find any takers, and they'll release Ertz before the start of the new league year.

Kelce may or may not retire this offseason. We'll see. If he decides that he wants to play one more season, however, it's hard to imagine that he would want to put his body through another taxing season with an Eagles team that is clearly undergoing a teardown and rebuild.

The Eagles have a hefty tab to pay on Kelce's contract. If they traded him before June 1, they would have a dead money hit of $10,142,000, and it would actually cost more to trade him than keep him. That probably can't happen.

#JimmySays: It's not out of the question for Kelce to be dealt after June 1 for perhaps a mid-round pick in 2022. He would only count for $5,500,000 on a new team's salary cap, and he still might be the best center in the NFL. He can still help someone contend for a Super Bowl.

After the Eagles traded up for Dillard in the first round of the 2019 NFL Draft, he was bad as a rookie, and had some struggles in 2020 training camp. Still, the Eagles were poised to have Dillard start at LT until a torn biceps in training camp ended his season.

This offseason, he'll have legitimate training camp competition in Jordan Mailata for the starting LT job. And really, in my view, Mailata probably deserves the first crack at the starting job, as he played better in his opportunities in 2020 than Dillard did in 2019. Mailata is also a year and a half younger than Dillard, despite entering the league a year earlier.

If the Eagles think Mailata is the better option than Dillard at LT and view him as the starter there going forward, Dillard doesn't offer the team much value, even as a backup, seeing as he can only play LT.

#JimmySays: If I were running a contending team, I would not hitch my wagon to Dillard as my starting LT. However, Dillard could perhaps be a reclamation project for a younger team that is still trying to build their line. It would actually cost a small amount ($135K) more to trade Dillard than to keep him, so the Eagles would only trade him for a worthwhile return. An early-ish Day 3 pick could get it done.

#JimmySays: The Eagles should trade Cox while he still has value, but I doubt that they would.

No. 1 receivers absolutely wrecked the Eagles' defense in 2019, and as a response the team acquired Slay in a trade during the 2020 offseason to stop the bleeding. Slay traveled with the opposing offense's best receiver all season long, and save for a pair of bad performances against DK Metcalf (10-177-0) and Davante Adams (10-121-2), he was at least able to slow them down.

The obvious answer, in my view, in option 2, given that Slay is now 30 years old on a rebuilding team. The Eagles are going to have to restructure a number of veteran contracts just to get under the cap in 2021. In doing so, they're going to be committing to players for extra years when they otherwise likely wouldn't. Slay is a candidate for that kind of unideal restructure.

If the Eagles were able to trade Slay, however, they would save $6 million, while taking on a dead money hit of $9,750,000 in 2021. That would be favorable to doing some sort of bad contract restructure with him.

#JimmySays: The Eagles would probably be wise to trade Slay to get him off the books, however, I can't see any teams having interest in him at a salary of $12 million. Maybe if some contender were to suffer some offseason injuries at corner?