John McMullen: Are the Eagles coaches too young? 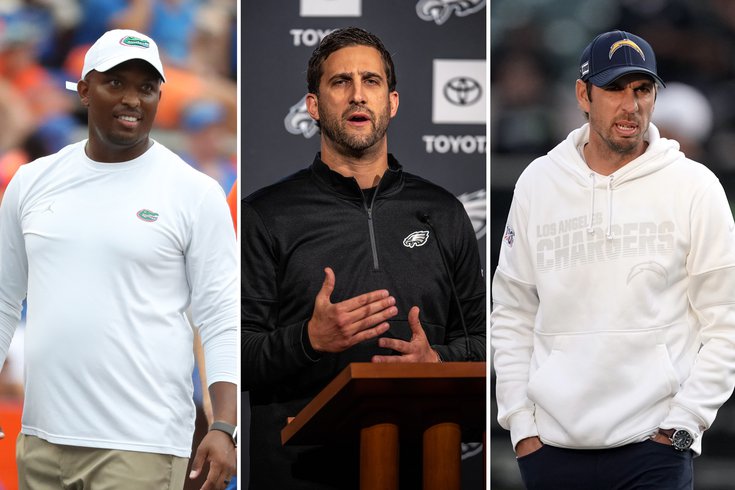 If youth really is wasted on the young as the French philosopher Voltaire first opined in the 1700s, you may have a right to be concerned about the Eagles' new coaching staff.

Knowing what you don't know tends to boil down to experience and that process is more often than not the result of trial and error. In other words, learning from one’s mistakes.

Now that Nick Sirianni has put the finishing touches on his inaugural coaching staff in Philadelphia, we can break it down.

Of the 13 main coaches on the staff — the head coach himself, his coordinators. and position coaches — two are over 50, offensive line coach and run-game coordinator Jeff Stoutland, a Doug Pederson holdover and the elder statesman of the entire group who just turned 59 earlier this month, and new defensive line coach Tracy Rocker, a former star defensive tackle at Auburn, who will turn 55 in April.

Three of those 13 coaches are in their 40s, assistant head coach/running backs Jemal Singleton (45), receivers coach Aaron Moorehead, another Pederson holdover who turned 40 this past November, and tight ends coach Jason Michael (42).

The average age of the main components is 39.8, perhaps ironic when you consider Sirianni himself turns 40 in June. Patullo will also hit the milestone in July.

Age is always just a number and neither Sirianni nor Patullo will get some kind of key to unlock the quiet dignity of wisdom when the calendar says they are 40 versus say the 24 hours before.

The real issue here is experience at the highest level of coaching.

Pederson's staff included former head coaches like Jim Schwartz and Mary Mornhinweg who had been in the league for decades and a LB coach in Ken Flajole eligible for social security who had been a defensive coordinator at the pro and college levels. By the end, just about everyone on the staff was familiar with traversing the pressure-cooker that is Philadelphia.

If you want to boil the current group down even further to the guys doing the heavy-lifting when it comes to game-planning you're talking about Sirianni, Gannon, Clay, and Steichen. The average age there is 35 and no one has been tested under their current job descriptions other than Steichen, who had a year and some change as the OC with the Los Angeles Chargers. The most important position coach is arguably Johnson with the QBs, who is a year younger than the average age of the inner circle and has never coached at the professional level before.

The concern over all that youth and inexperience is legitimate but how important is it to the actual players?

To find out I reached out to former Archbishop Wood star and current Carolina Panthers tight end Colin Thompson.

At 27, Thompson, who also played at Temple after transferring from the University of Florida, is the same age as Rallis, much like the Eagles' top linebacker and soon-to-be Rallis student Alex Singleton.

Thompson also learned under Panthers offensive coordinator Joe Brady in 2020, a 31-year-old coach who was the youngest coordinator in the NFL until Clay usurped him and incidentally was also one of the 10 candidates the Eagles interviewed for their head-coaching position before hiring Sirianni.

"I think every coach has to earn the player's respect and every player has to earn every coach's respect no different than a normal conversation or a normal friendship or a normal working relationship," Thompson explained. "Football is just a microcosm of society, the same work issues that you'd have at your 9 to 5 it's your same work issues that you'd have at [an office], it's the same pros and the same cons."

The difference comes in with the microscope and how many are going to pay attention.

When Bill Lumbergh makes a questionable decision at Initech, employees groan. When Sirianni pulls the wrong string on 4th-and-2 with the game on the line, those are growing pains in a public setting where everyone is chiming in.

"Granted, it's a little bit bigger scale [in the NFL]," Thompson acknowledged. "It's a billion, multi-billion dollar industry."

During Thompson’s own career which has taken him through North Jersey with the New York Giants, as well as Chicago, along with stints in both the now-defunct AAF with Birmingham and the XFL 2.0 with the Tampa Bay Vipers, before catching on with Matt Rhule and the Panthers, the 6-foot-4, 250-pound TE spotlighted some positives when dealing with coaches from the same generation like Brady and Chase Blackburn, Carolina's 37-year-old STC who was still playing linebacker in the NFL through 2014.

"I find some positives being with a young coach like Chase Blackburn or Joe Brady," Thompson noted. "I watched Chase play [with the Giants] and I watched Chase win a Super Bowl and I was at that Super Bowl parade and I tell stories about watching Chase go down on a float drinking beer, you know, holding the Super Bowl trophy up so that's unique in that sense where I really grew up watching these guys."

As for Brady, Thompson can go back to his days with the Owls when Temple upset Brady and Co. in 2015 when the coach was 26 and a grad assistant at Penn State before his meteoric rise on the profession. It was the first time the Owls beat the Nittany Lions since 1941 and halted a 39-game winless streak in the "rivalry."

"Joe coached at Penn State and we beat Joe when he was at Penn State so you know those are fun stories we get to talk about so it's definitely unique in that sense,” said Thompson.

In the end, however, it comes down to the person and the job he's doing, according to Thompson.

To date, however, most young coaches have been given sounding boards who’ve done it before when it comes to their first head-coaching job.

The Los Angeles Rams had Wade Phillips for Sean McVay. In Green Bay, Matt LeFleur had Mike Pettine and Chicago’s Matt Nagy had long-time defensive coordinator Vic Fangio who hadn’t been a head coach at the time but Thompson, who was with the Bears during that period, also noted Nagy had Brad Childress, the ex-Andy Reid OC, and Minnesota head coach, as a consultant.

“Brad Childress was in the back and coach Nagy would go up to Brad and say ‘hey, what are we doing. How did they do it in Philly,” Thompson explained.

The Eagles also followed that template in 2016 by pairing Schwartz with Pederson.

From a player’s perspective, though, respect has to be earned, no matter the age or the reputation.

Thompson admitted that a Bruce Arians, Bill Belichick, or Andy Reid will enter the room with more cachet but success at the exit sign is tied to performance.

"If you're a player you go into the meeting room and okay you'll notice, ‘yeah the guy's only maybe a year older than me.' but if he does his job and he's an elite coach the respect is the same no doubt about it when it comes to a younger player working with the younger coach," Thompson noted.